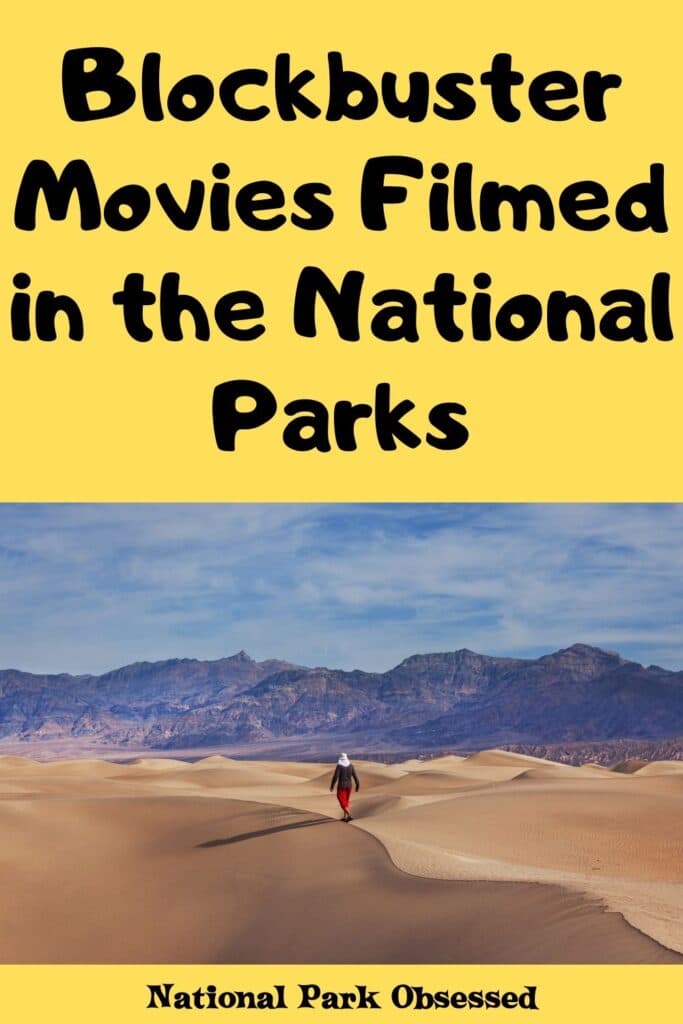 The United States National Parks have been inspiring writers, photographers, and artists since they were first seen by mankind. The filmmakers of Hollywood are no different. They look at these awe-inspiring landscape and recognize the beauty and how it will add an extra dimension to their films. There have been numerous movies filmed in the National Parks. Here are but a few where a National Park had a starting role:

Movies Filmed in the National Parks

Close Encounters of the Third Kind (1977)

Death Valley has started in many films. There is a multi-page list of films, but only one film series has a dedicated tour and page on NPS’s website. Star Wars is that film or films. The park features in both Episode IV – A New Hope and Star Wars Episode VI – Return of the Jedi as part of the planet Tatooine.

Who doesn’t love the cute Ewok of the Planet Endor? Those cute furry Ewok live in a thick forest planet. That forest isn’t fiction. Star Wars Episode VI – Return of the Jedi film the pivotal battle in Redwoods National and State Parks.

When director Franklin J. Schaffner was looking for an inhospitable landscape to be the backdrop for his upcoming science-fiction film “Planet of the Apes,” he settled on the lakeshore of the freshly dammed Lake Powell. This dammed section of the Colorado River made the perfect site for Charlton Heston to land on the Planet of the Apes.

The Statue of Liberty makes an appearance at the end Planet of the Apes. She is seen half-buried in the sand by Heston’s character letting him know that the apes had taken over from the humans

Few roads are as iconic as the Going-to-the-Sun Road and this remote mountain road was a perfect road to set the stage for Stanley Kubrick’s psychological horror film. The road is seen in the beginning of the movie as Jack Nicholson’s character Jack Torrance and family drive to the hotel where he will be winter caretaker.

The movies hotel is actually the Timberline Lodge on Mount Hood, Oregon.

In Rocky IV, Rocky Balboa (Sylvester Stallone) starts retraining back into the boxing ring to for a bought with a Soviet Union fighter. While set in the snowy mountains of Russia, Grand Teton National Park was used to stand in for the Soviet Union. Stallone’s character was shown training in man locations around the park.

Butch Cassidy and the Sundance Kid (1969)

When Robert Redford was cast as the Sundance Kid, the long time Utah resident couldn’t wait to show off the amazing scenery of his home state. He convinced the producers to film in the state and show off its amazing landscape including Zion National Park.

Robert Zemeckis’ Forrest Gump is a roller coaster of American history. The film follows Tom Hanks’ character Forrest through his life. One of the film’s most iconic moments was when he attends an anti-war rally at the National Mall and reunites with his girl Jenny in the Reflecting Pool.

Redwood National and State Parks stars in another film on this list. Jurassic Park’s sequel “The Lost World” uses the forest as a backdrop for Ingen’s second Costa Rica island of dinosaurs.