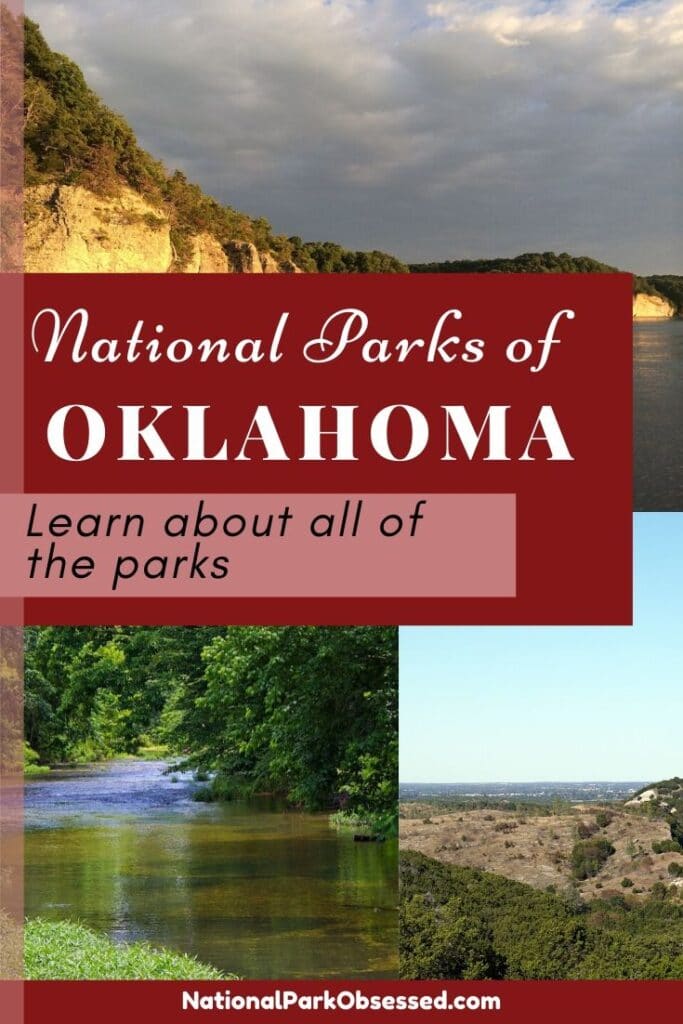 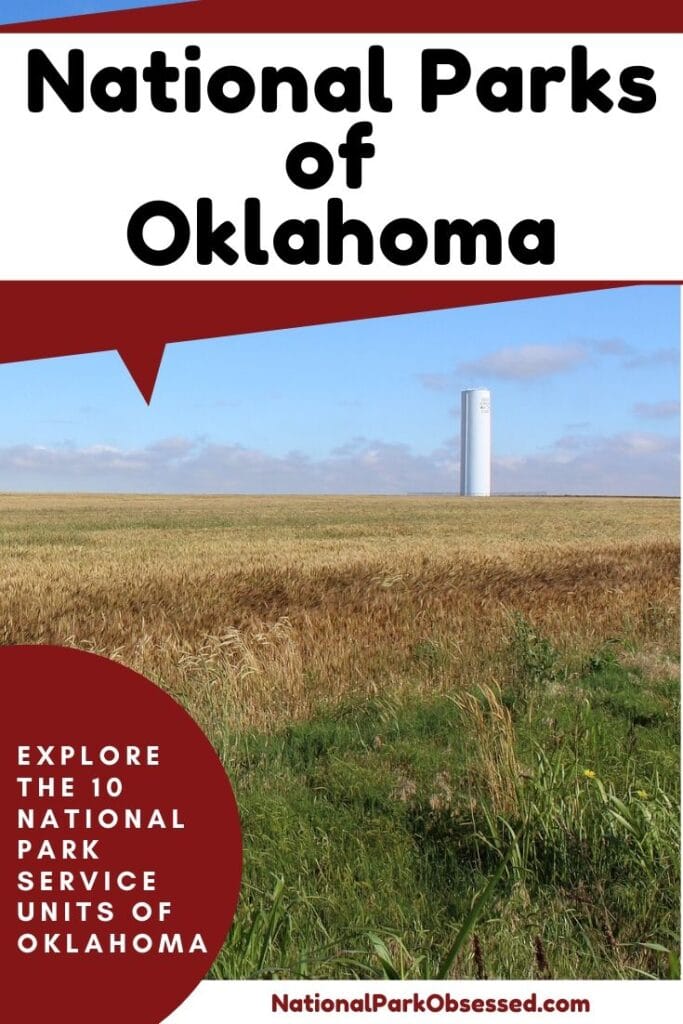 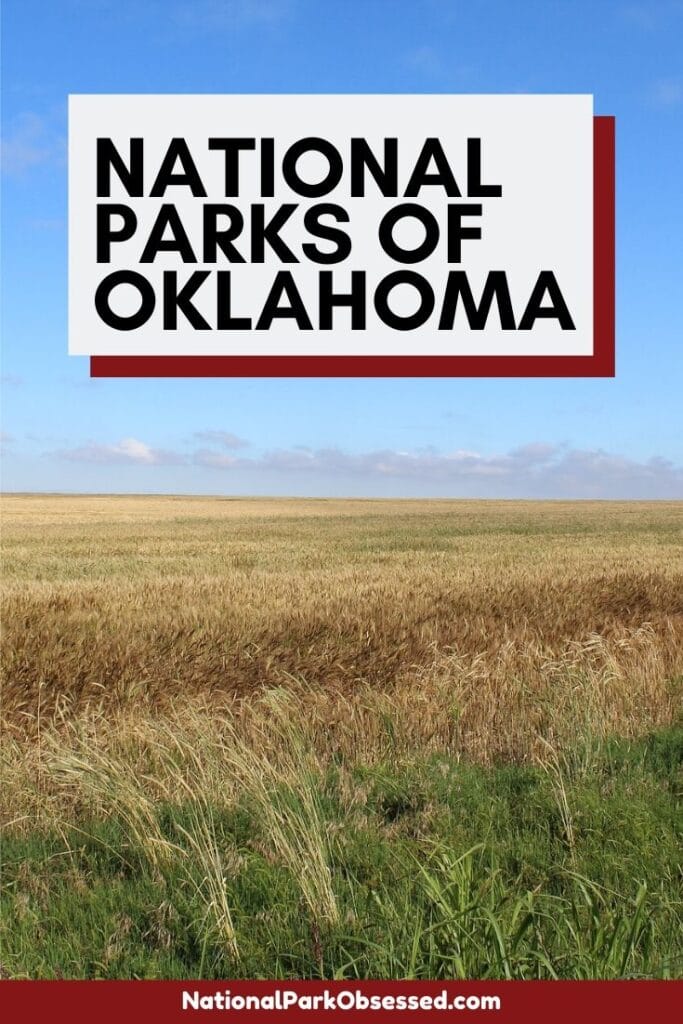 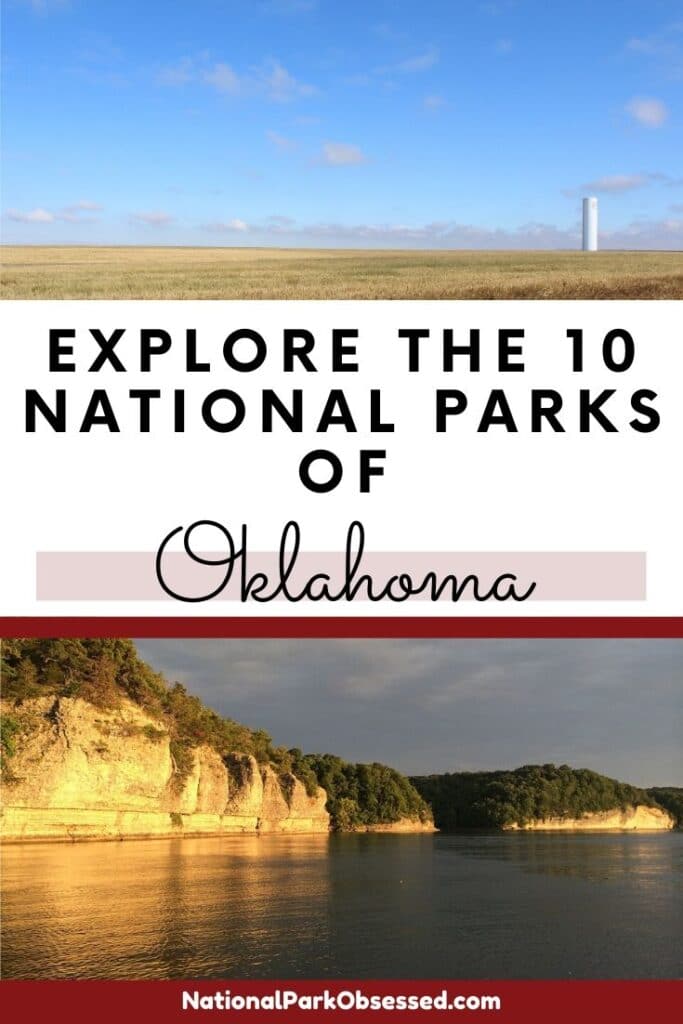 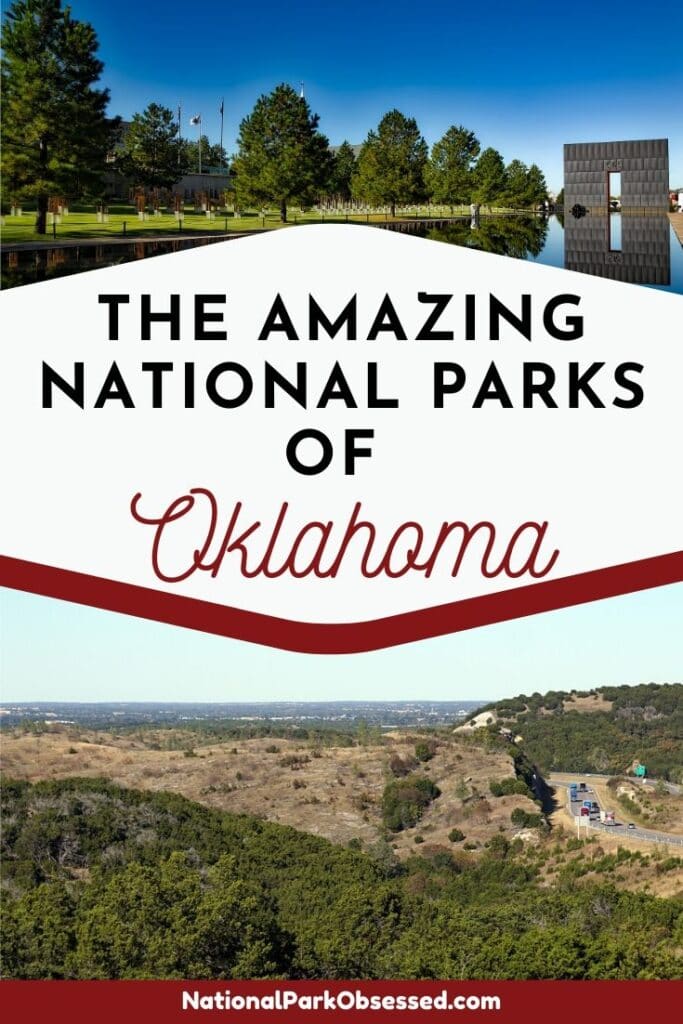 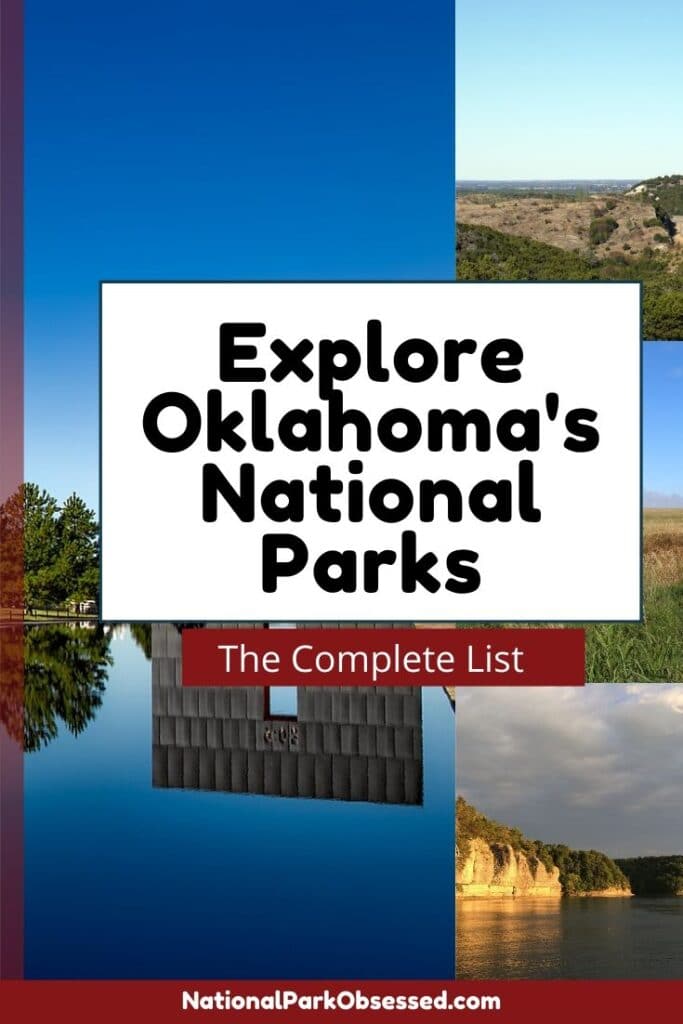 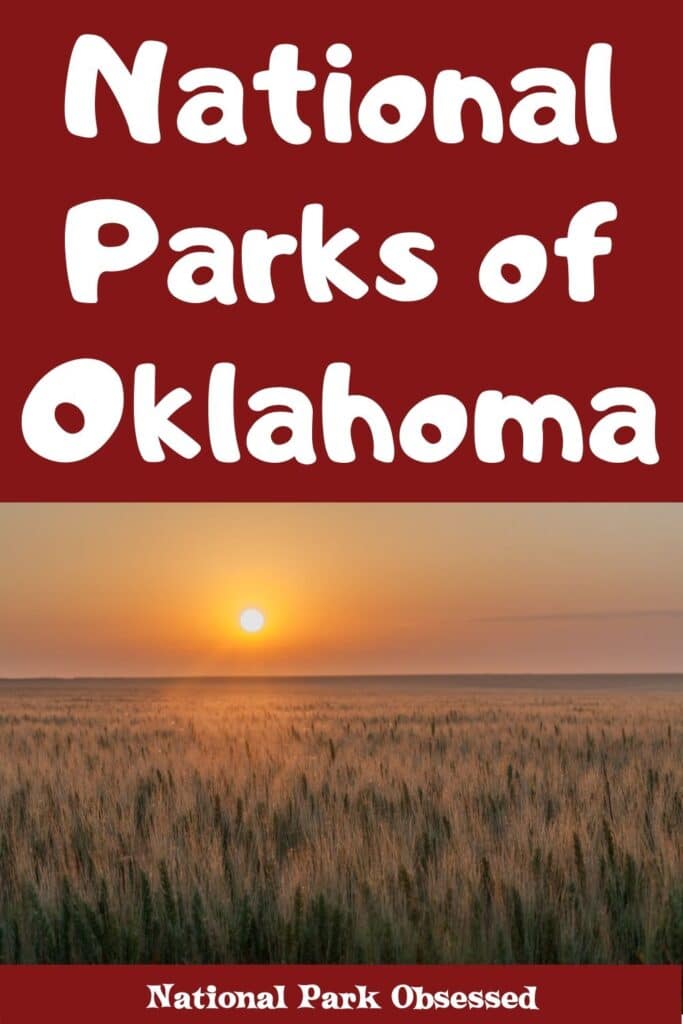 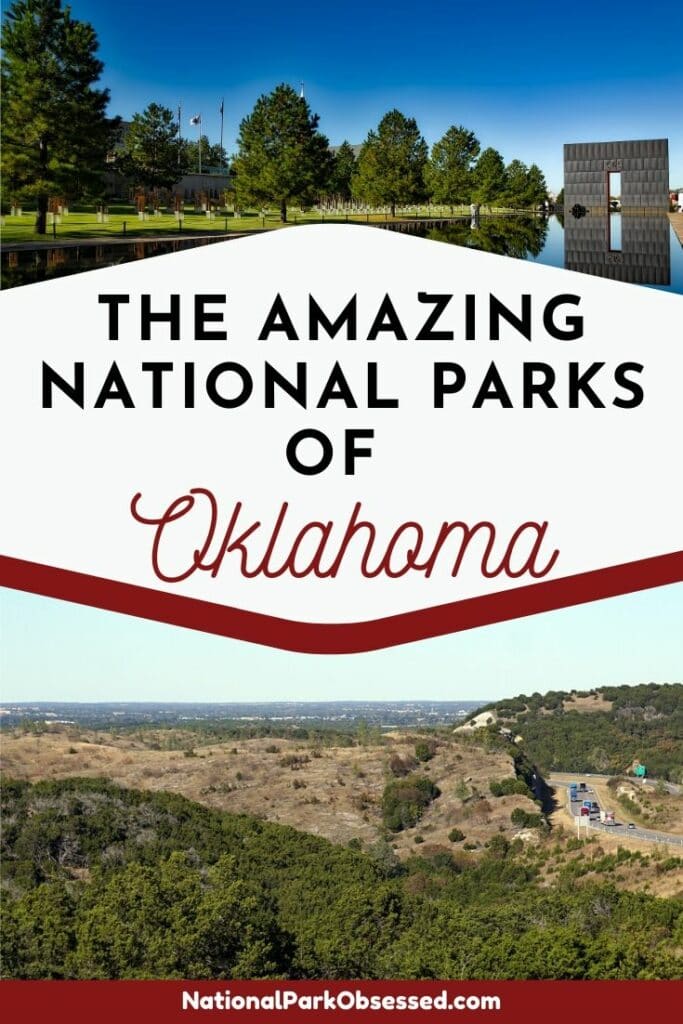 Oklahoma is part of the National Park Service’s Intermountain Region. Oklahoma’s landscape is made up of prairie’s mesas, easter forests and the remains of ancient mountain ranges. The state was a crossroads of Native American civilizations. Today over 25 different Native American languages are spoken in the state. There is currently three National Park Service Site in Oklahoma and three associated sites.

Map of National Parks in Oklahoma

Oklahoma is part of the Southwest Region.

Chickasaw National Recreation Area is located in the foothills of the Arbuckle Mountains and protects the partially forested hills, springs, streams, and lakes. When the Choctaw and Chickasaw Nationa were forced out of the southern United States they were given this area as part of the NEW Chickasaw Nation. The Chickasaw found a collection of mineral and freshwater springs. As time passed and the region was developed, the Chickasaw watched the private development of Hot Springs, Arkansas. They feared that these mineral springs would be privatized in the same manner. In 1902, the Chickasaw sold the springs to the US Government to protect the springs from the private resort developers.

Visitors to Chickasaw National Recreation Area will find a range of things to do. Boating on the Lake of the Arbuckles is one of the park’s most popular activities. There are four boat ramps for all types of boats. There are plenty of places to swim in the park. Swimming is offered in many of the lakes and along the Travertine and Rock Creeks. The park has hiking, biking, and horseback riding opportunities.

Fort Smith National Historic Site protects the 19th-century military forts. These forts were used by the United States military during the US’s westward expansion. Fort Smith was preserved for its military history from 1817 to 1871. The site was home to United States District Court for the Western District of Arkansas. This district court was presided over by Isaac Charles Parker for twenty years. Parker was nicknamed the “Hanging Judge of the American Old West” due to the number of death sentences he handed out. Parker’s court was sensationalized due to this but his court was central in the legal fights between the Indian Nationals and settlers. When the Indian Removal Act went into effect, Fort Smith was an important stop on the Trail of Tears.

Visitors to Fort Smith can explore the remaining buildings such as the jails, courtroom and exhibits on Indian Removal, and Deputy U.S Marshals. One can explore the complex history of the area and take a walk along the Arkansas River.

Washita Battlefield National Historic Site protects and interprets the Battle of Washita and the remains of one of the Southern Cheyenne villages. In November 1868, a band of Southern Cheyenne and other tribes led by Chief Black Kettle set up a winter encampment. Black Kettle and his people were in the area seeking peace. On the night of November 25th, a group of young men went against their chief’s wished and raided white settlements. The 7th US Cavalry lead by Lt. Colonel George Custer tracked these young men back to the Washita encampment. On the early morning of November 26th, Custer and his men attacked the encampment. Accounts of what happened during the “Battle” vary, but Custer did take women and children hostage and used them as human shields for his men as part of his “total war” strategy. There is plenty of debate on if this event was a battle or massacre. Depending on the source somewhere between 16 and 150 men, women and children were killed.

Visitors to Oklahoma City Memorial is can explore the open-air 3.3-acre memorial. The memorial is made up of two twin bronze gates that frame the reflecting pool. On the site of the Murrah Building are 168 glass and bronze chairs that represent the men and women killed in the bombing. The 19 smaller chair represent the 19 children killed in the attack. The Survivors’ wall has the names of the survivors on it.

Santa Fe National Historic Trail was a freight transportation route from Franklin, Missouri, and Santa Fe, New Mexico. The route runs through Missouri, Kansas, Oklahoma, Colorado, and New Mexico. The trail splits in Kansas into the Mountain Route which heads further west into Colorado before heading south and the Cimarron Cutoff which crosses the Cimarron Desert and goes through Oklahoma. The trail was established in 1822 to encourage trade between the US and Mexico.

Today, visitors to the Santa Fe National Historic Trail is an autoroute. Along the way, there are many local, state and federal sites to explore to learn more about the route and the region’s history. Autograph Rock near Boise City, Oklahoma was an important stopping place as it was one of the few year-round water sources in this region.