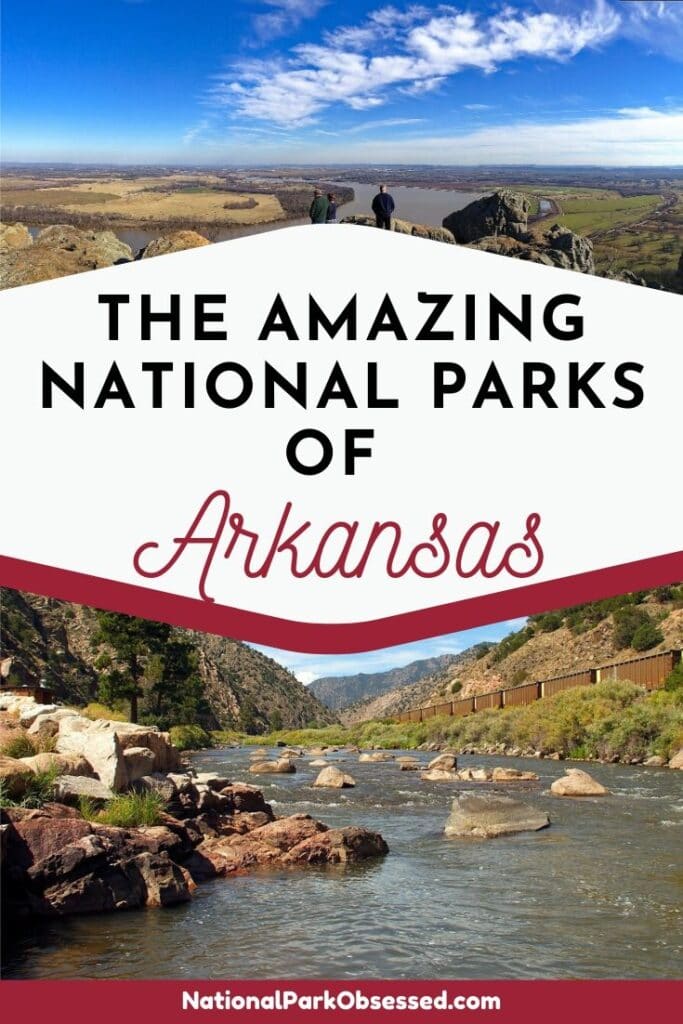 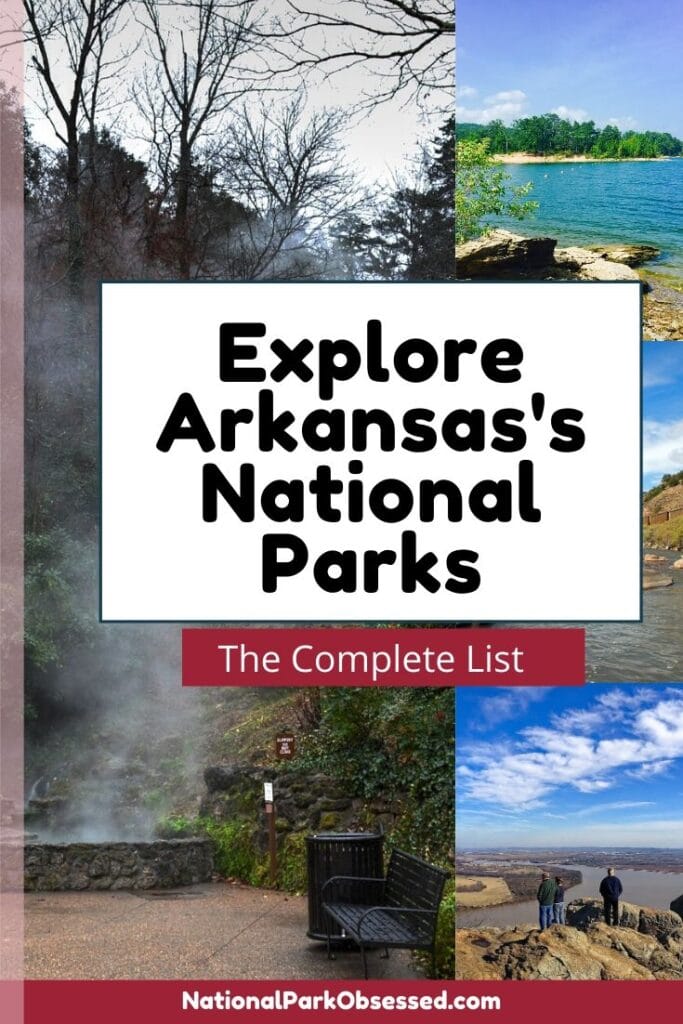 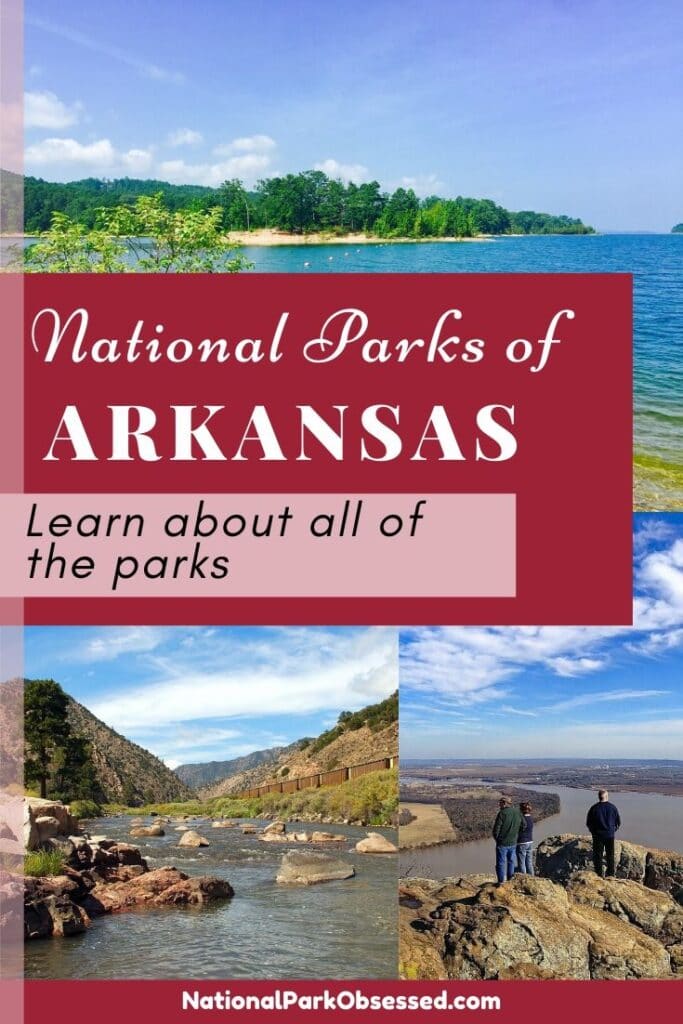 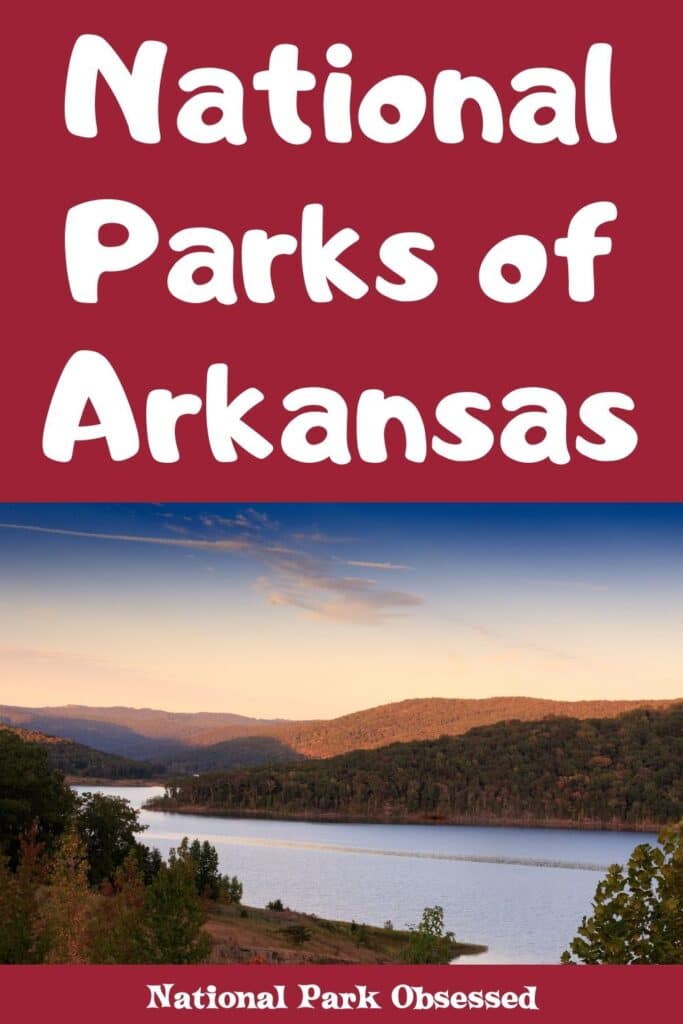 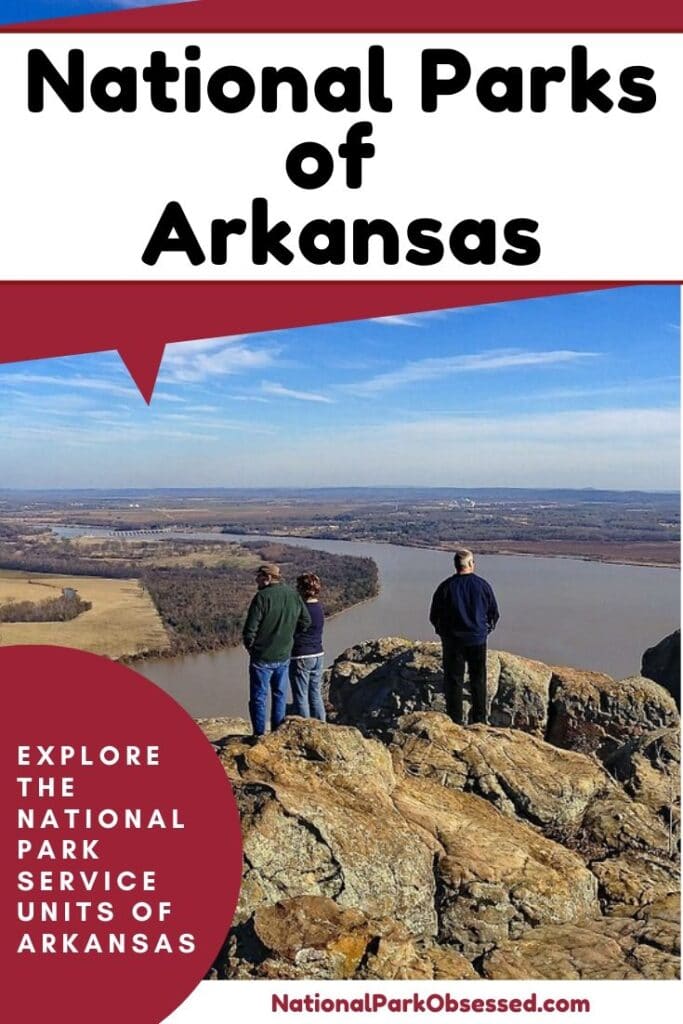 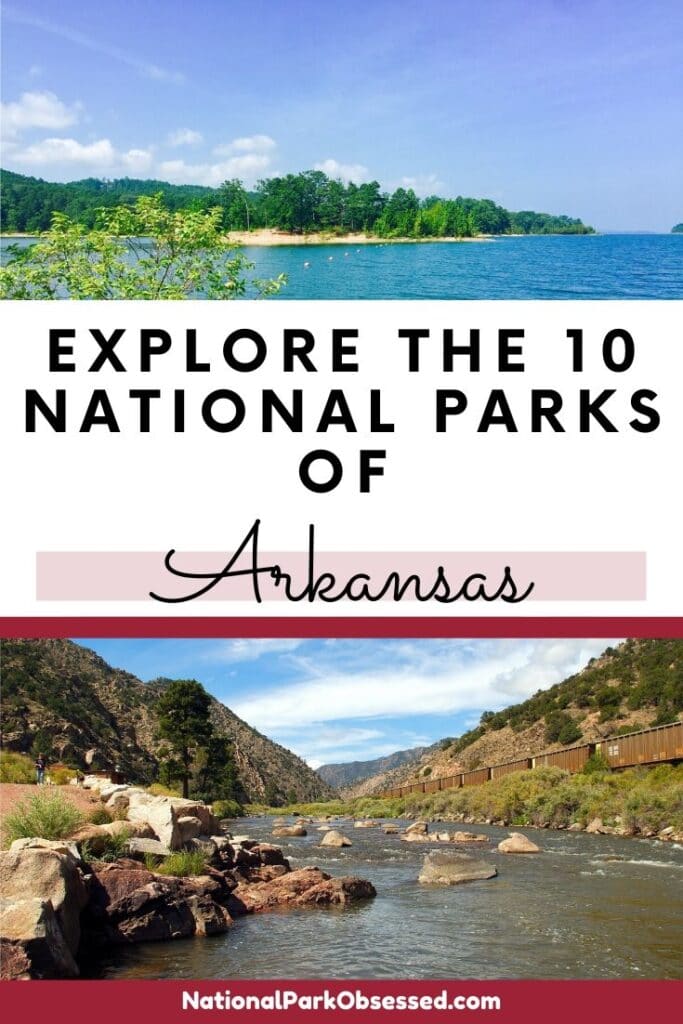 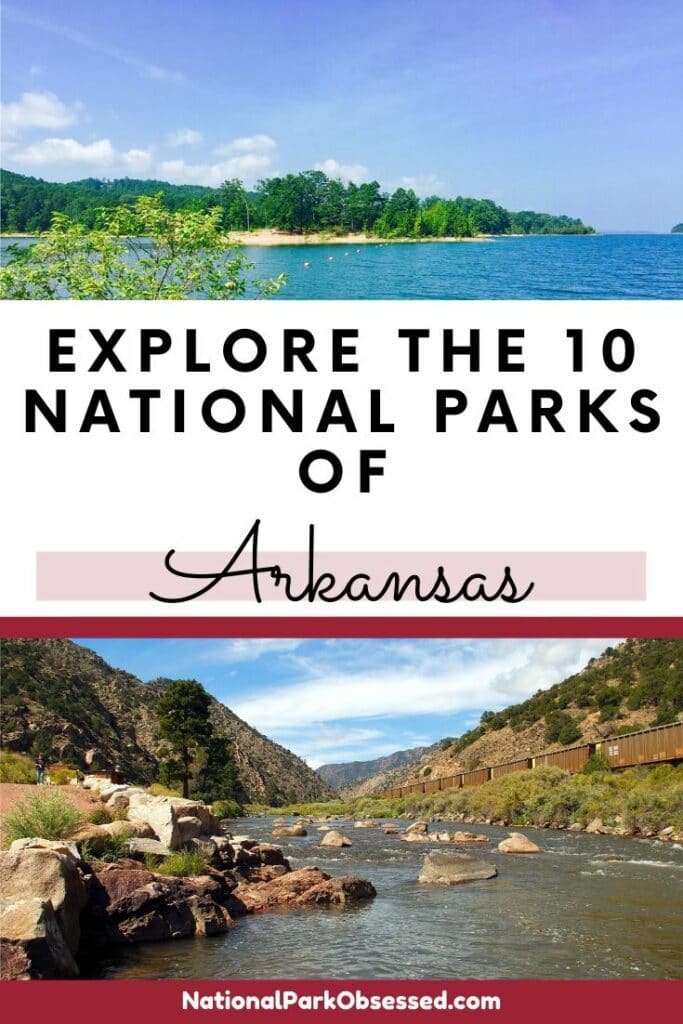 Arkansas is part of the National Park Service’s Midwest Region. Arkansas’s landscape transitions from eastern lowlands of the Mississippi River and Arkansas Delta to the Ozark and Ouachita Mountains. The state has a rich natural area and played a critical role in the Civil Rights movement. There are currently six National Park Service Site in Arkansas and 3 associated sites.

Map of National Parks in Arkansas

Arkansas Post National Memorial honors the first European settlement of the lower Mississippi River Valley at the confluence of two rivers.  In 1686, a French trading post was established by Henri de Tonti.  The fort was used to trade with the Quapaw tribe. It was named Aux Arcs and started as a wooden house.  Over time the trading post grew in size.  There was an attempt to grow crops in the area but the project failed.  The fort would fail to turn a profit before being destroyed in 1749 during the Chickasaw Wars. The fort was rebuilt closer to the Quapaw villages with a stronger military presence.  The fort would be rebuilt a second time on the opposite river bank to better respond to British attacks.  At the end of the Seven Years’ War (also known as the French and Indian War), the fort was traded to the Spanish as part of the treaty between the British, French and Spanish.  The Franch would rebuild the fort after a massive flood and would remain in control of the fort until the US purchased the fort in 1804 as part of the Lousiana Purchase.  Technically, the French-owned the fort from 1800 to 1804 but they never took control.

Today, the Arkansas Post National Memorial is a 757-acre area of protected land.  National Park Service owns 664 acres and the rest is controlled by the Arkansas Department of Parks and Tourism.  Visitors today can explore a museum close to the original fort sites.  Several archeological digs have been done in the area.  They have unearthed sections of the early forts. A partial reconstruction of the revolutionary war era fort was done in the 1960s. The area offers several paved and unpaid hiking trails.

The Buffalo National River is a 153 mile long river in Arkansas. The river starts in the Boston Mountains of the Ozarks and flows onto the Springfield Plateau before joining the White River. The first 18 miles of the river is managed by the Ozark National Forest as a National Scenic River and a National Wild River. The lower 135 miles is managed by National Park Service. The park is home to the only elk herd in Arkansas.

Visitors to the Buffalo National River find an undammed river that provides white water rafting and river floating opportunities. The water level varies based on rainfall. There are miles upon miles of hiking and riding trails to explore.

Fort Smith National Historic Site protects the 19th-century military forts. These forts were used by the United States military during the US’s westward expansion. Fort Smith was preserved for its military history from 1817 to 1871. The site was home to United States District Court for the Western District of Arkansas. This district court was presided over by Isaac Charles Parker for twenty years. Parker was nicknamed the “Hanging Judge of the American Old West” due to the number of death sentences he handed out. Parker’s court was sensationalized due to this but his court was central in the legal fights between the Indian Nationals and settlers. When the Indian Removal Act went into effect, Fort Smith was an important stop on the Trail of Tears.

Visitors to Fort Smith can explore the remaining buildings such as the jails, courtroom and exhibits on Indian Removal, and Deputy U.S Marshals. One can explore the complex history of the area and take a walk along the Arkansas River.

Hot Springs National Park has one of the most colorful histories of any National Park. The naturally occurring hot springs have been attracting humans for more than 8,000 years. Native Americans regularly used the springs. There was even a peace agreement to lay down arms to partake in the waters. The first Europeans arrived in the 1670s and the land traded hands several times until 1803. The land was included in the Louisiana Purchase. American expeditions visited the area and recognized the value of the springs. By 1807, several cabins had been built and the bathhouse industry had started. Once Arkansas become a territory in 1819, they started working on federal protection for the hot springs. In 1832, the land was given federal protection. This was the first time that land was set aside by the federal government for its use as a recreation area. As time passed bathhouses were built and the springs were advertised as a cure for any illness. A rather elaborate mob racket was formed in the 1870s. The hot water was prescription only and the prescription had to come from a doctor. Everything in the town from the doctor to the bathhouse to the mortician was designed to squeeze money out of ill people and their families.

Visitors to Hot Springs will find an urban park made up of two natural areas and the historic bathhouse row. There are several miles of hiking trails to explore. There are currently two bathhouses available for bathing. One of the other bathhouses is an excellent brewery.

Get help planning your trip to Hot Springs National Park

Little Rock Central High School National Historic Site is one of several historic sites important to the U.S. Civil Rights Movement. In 1954, the US Supreme Court declared that “separate but equal” was inherently unequal and therefore unconstitutional in Brown v. Board of Education. This ruling paved the way for the integration of African American’s into white schools across the southern United States. In 1957, Little Rock became one of the first tests of the implementation of Brown v. Board of Education. Nine African American students were enrolled at Central High School in September 1957. Arkansas Governor Orval Faubus deployed the Arkansas National Guard to “preserve the Peace” aka prevent these African American students from entering the school. For 20 days, they did just that until Present Dwight D. Eisenhower had had enough. He federalized the Arkansas National Guard and ordered that the National Guard was to enforce the orders of the federal courts and maintain law and order. 1957 was a tense school year and the nine students were harassed by students and protesters. It would be many years before the white community of Little Rock would accept the integration of their schools but integration was started.

Pea Ridge National Military Park protects the site of the Civil War Battle of Pea Ridge. The Battle of Pea Ridge was a major battle of the American Civil War. The battle took place on March 7 – 8, 1862 near Leetown, Arkansas. The battle was fought between Brig. Gen Samuel R. Curtis and Arkansas Maj. Gen. Earl Van Dorn. Pea Ridge was one of the few battles where the Confederates outnumbered the Union forces. Van Dorn launched a counter-offensive in hopes to recapture northern Arkansas and Missouri. Curtis took up a defensive position. After two days of battle, Curtis’s men forced a Confederate retreat. The battle established federal control of Missouri and northern Arkansas.

Pea Ridge National Military Park is one of the best-preserved Civil War battlefields. Visitors can explore the battlefield via hiking trails and a driving tour. About 2.5 miles of the Trail of Tears National Historic Trail runs through the park.

President William Jefferson Clinton Birthplace Home National Historic Site preserves the house where President Bill Clinton was born and lived for four years. The house is located in Hope Arkansas and was owned by Edith Grisham and James Eldridge Cassidy. President Clinton was the 42nd President of the United States. He was born on August 19, 1946, to William Jefferson Blythe Jr. and Virginia Cassidy. Clinton was named William Jefferson Blythe, III after his father. Jr. died three months before he was born while traveling for work. Virginia was living with her parents when Bill was born. She left him in the care of his grandparents, Edith and James while working in New Orleans. Once Virginia finished nursing school and married Roger Clinton Sr, Bill moved with his mother and new husband to Hot Spring, Arkansas.

Visitors can take a guided tour of the house. They are offered every 30 minutes starting at 9:00 am.