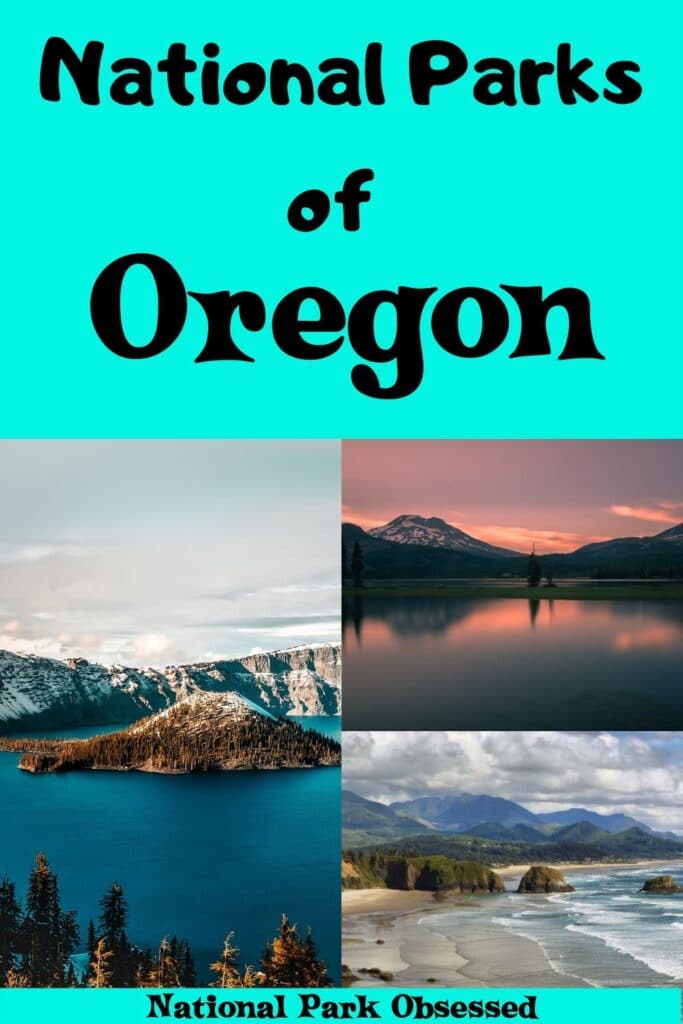 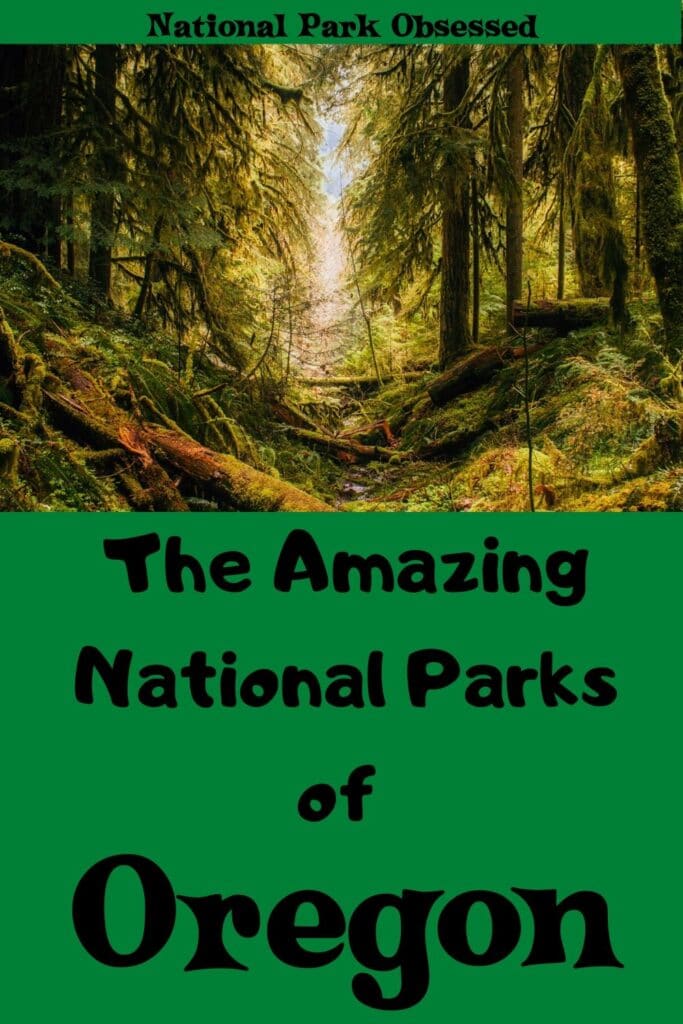 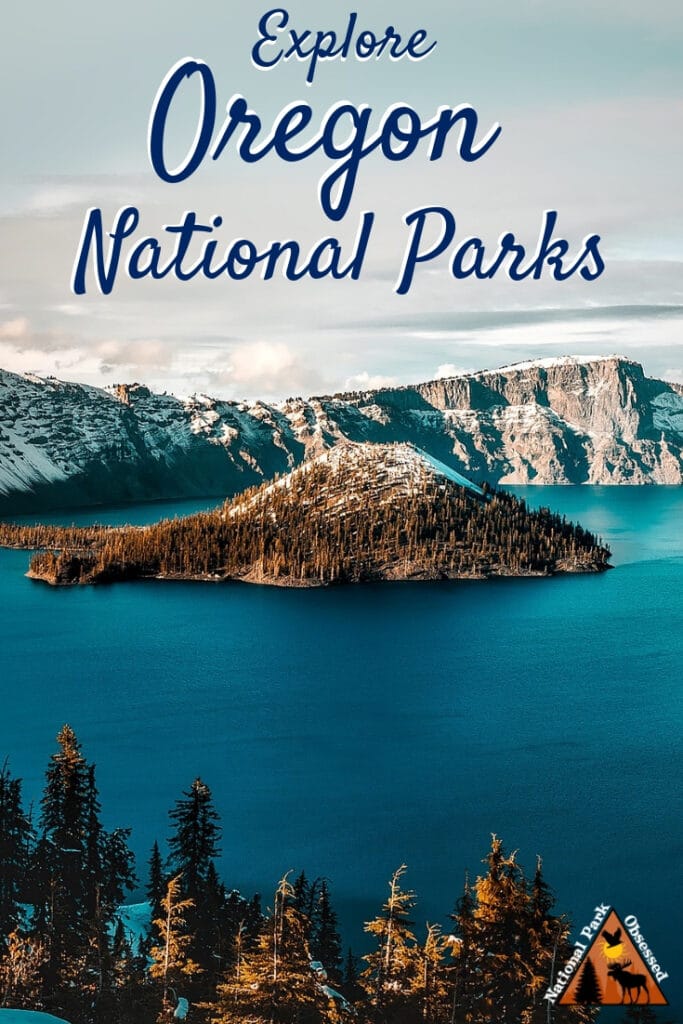 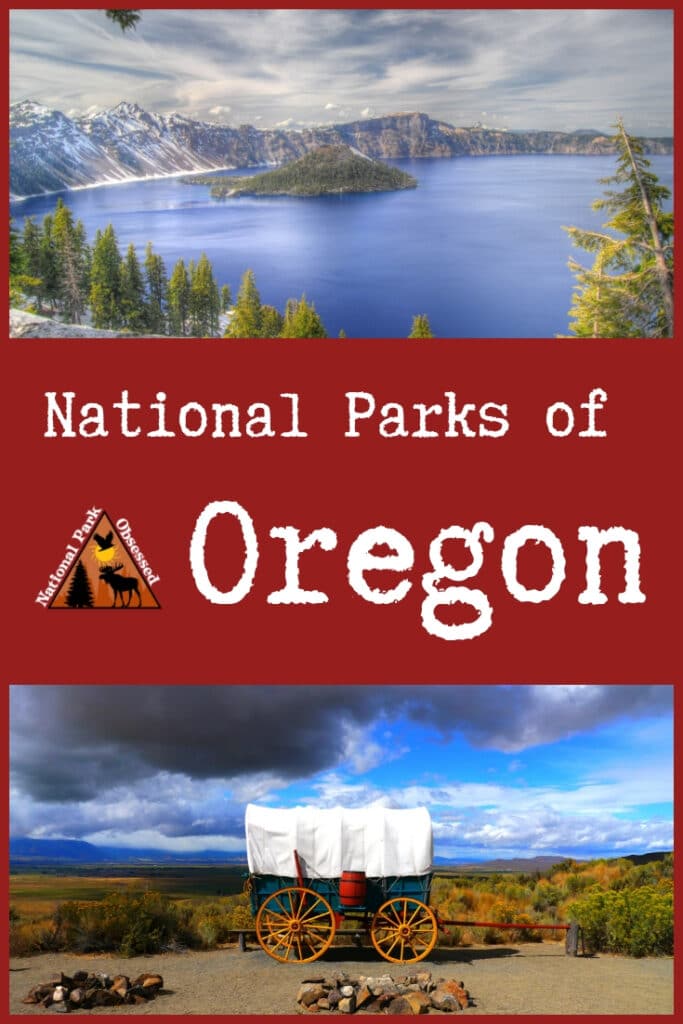 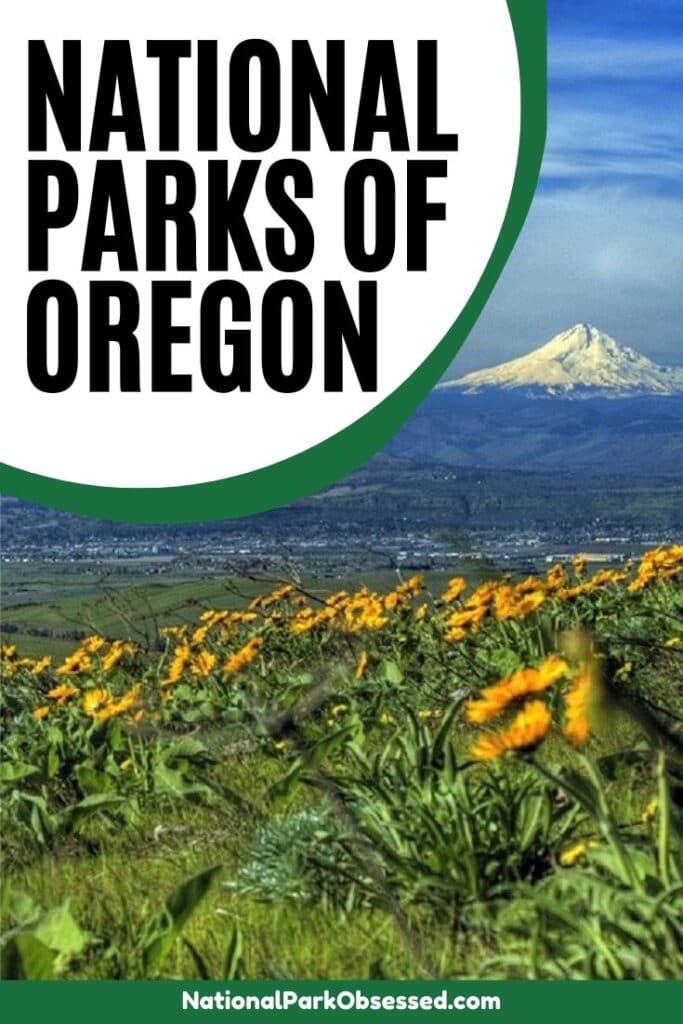 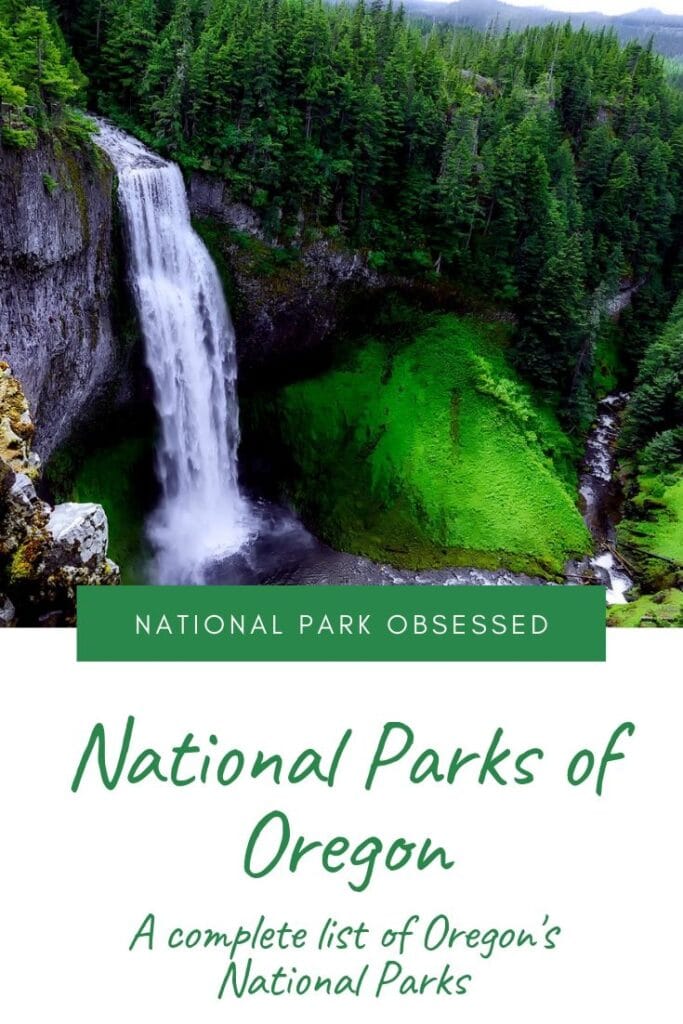 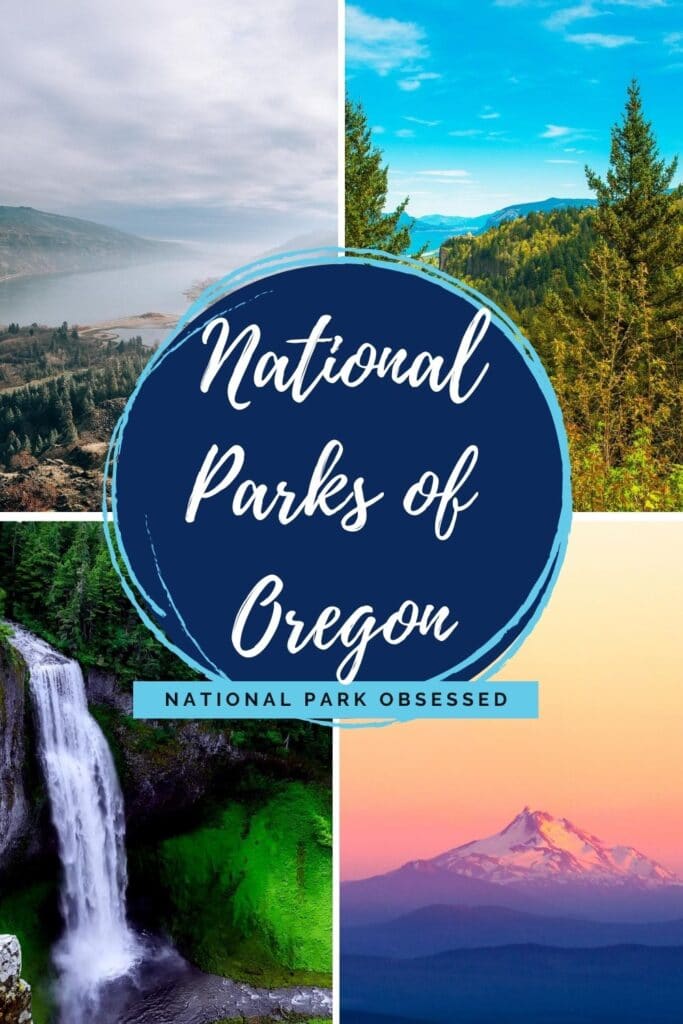 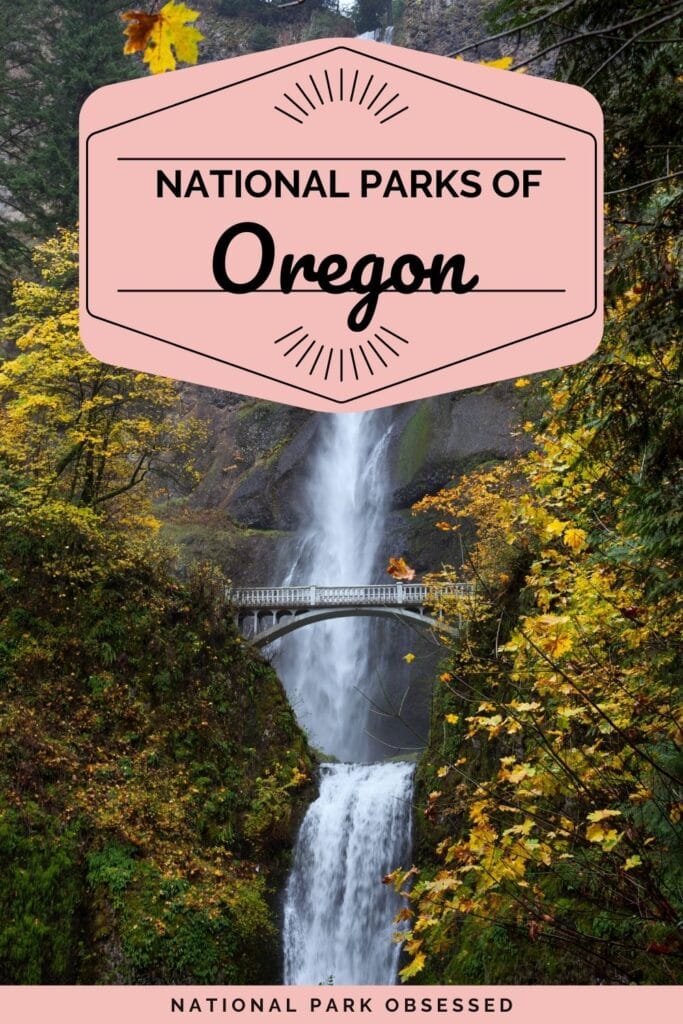 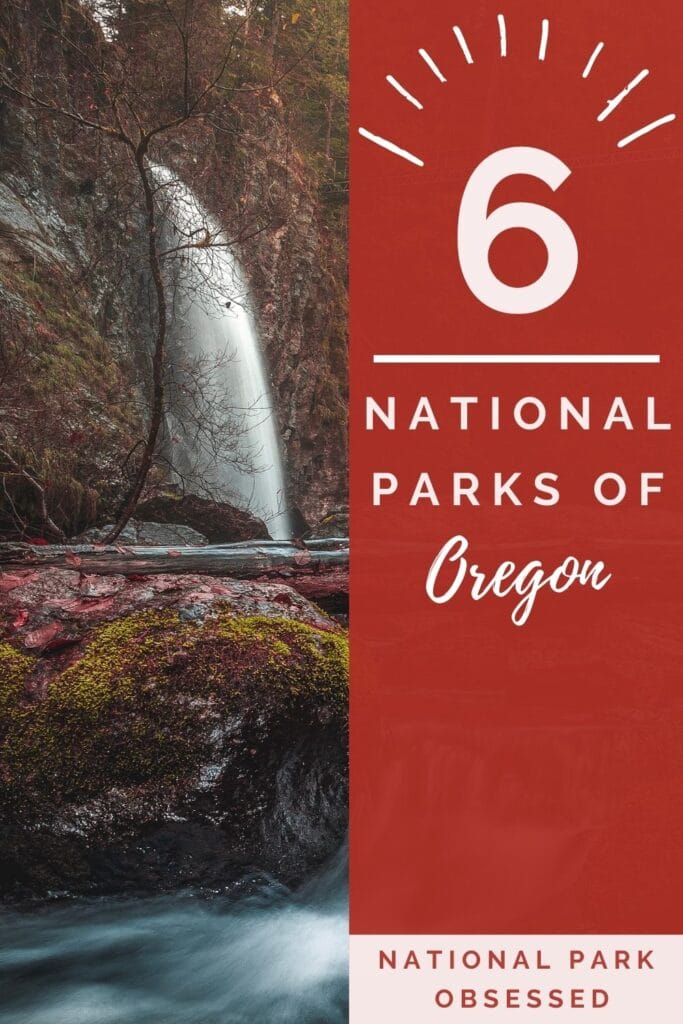 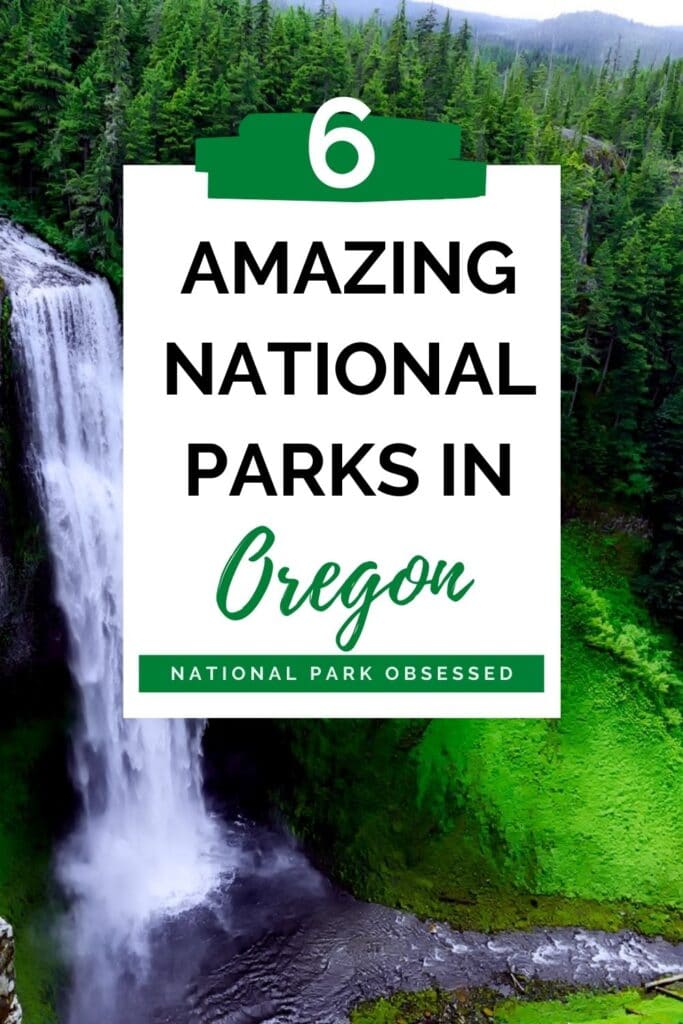 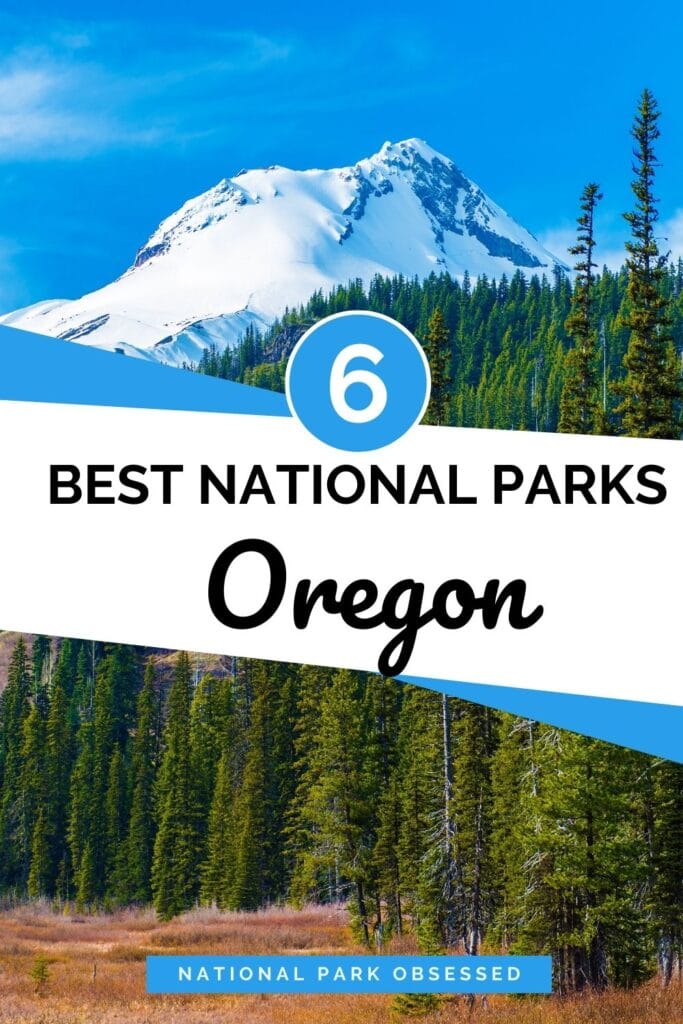 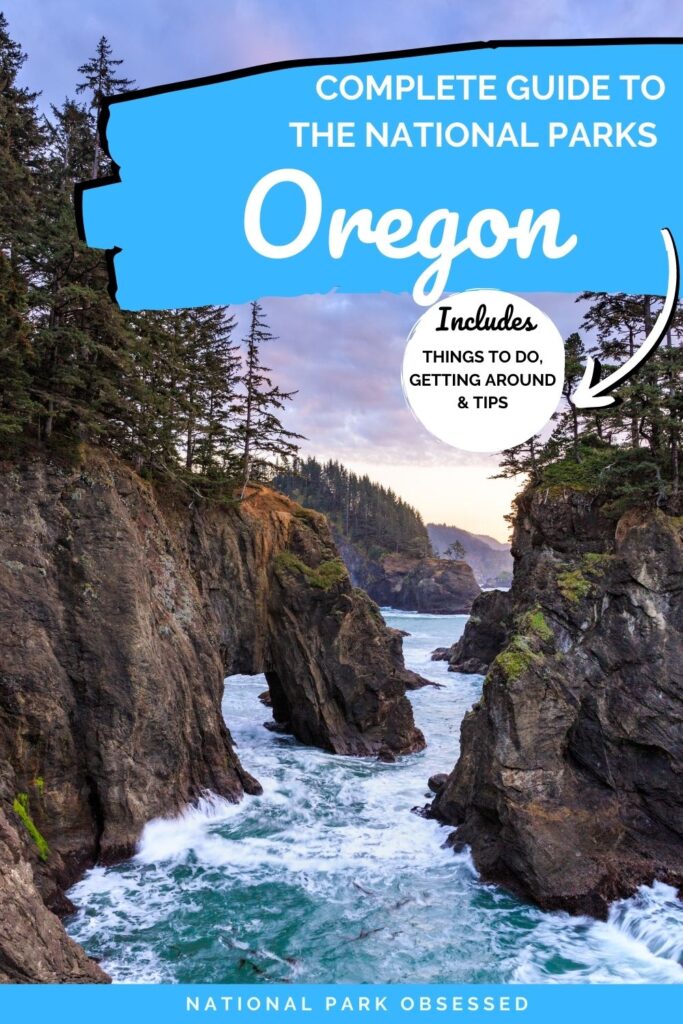 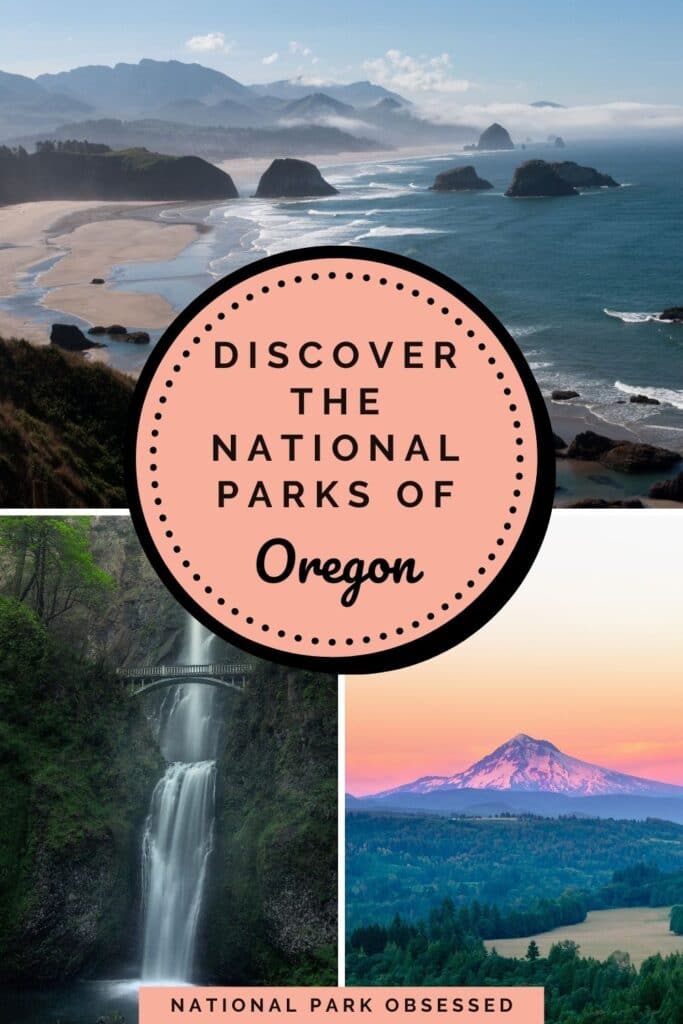 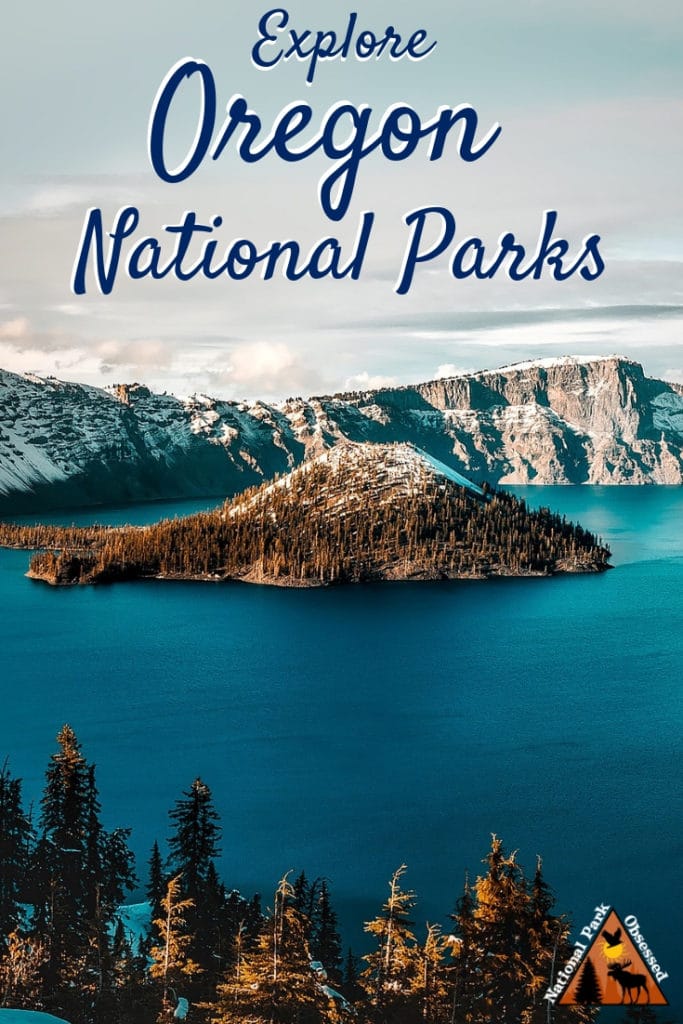 Located in the heart of the of the Pacific Northwest is a geographically diverse state. Oregon has it all – volcanoes, evergreen forests, high desert and shrubland. This mix creates some of the most interesting landscapes to explore. Despite the variation of landscape, Oregon only has 6 national park units. These units are an interesting mix of history and natural features.

Looking to add to your national park bucket list? Get the Ultimate National Park Checklist, complete with some of the most amazing things to do in all 63 USA National Parks!

Map of National Parks in Oregon

Planning to visit multiple national parks in the NEXT 12 months?

The America the Beautiful National Park Pass covers the entrance free for all 400+ national park sites, including all 63 national parks, for 12 months!

Oregon is part of the West Coast Region.

Crater Lake National Park is both a giant lake and a mountain.  Kind of, it is a giant lake in the caldera of a destroyed volcano.  About 7,700 years ago, Mount Mazama stood about 11,000 ft.  During a particularly violent eruption, Mazama blew her top off and created a large caldera.  Over time, the caldera filled with water from rain and snow.  The filled caldera is Crater Lake.  At it is 1,949 feet (594 meters) deep.

The bright blue is caused by the purity of the water.  Crater Lake has no streams or rivers flowing into the lake to bring sediment or pollution.  The lake has no native fish.  In 1888, several species were stocked.

The lake water is always cold.  During the summer, the surface can reach 60 F (15.6 C).  The park offers boat tours of the lake and a shuttle out to Wizard Island.  If you insist on swimming in the lake, one hiking trail leads below the rim to the surface of the lake.  Other park activities include hiking many trails along the rim or surrounding forest.

Entrance Fee: $30 per vehicle or free with an America the Beautiful Pass.

Fort Vancouver National Historic site is the former headquarters of the Hudson’s Bay Company’s Pacific Coast fur trading operations from 1824 until 1860.  The Fort was bustling with people from around the region.  The area was home to the first Pacific Northwest formal school, hospital, and library.  The fort was developed by John McLoughlin.

Today, the original Fort Vancouver is destroyed by fire and time, but a modern replica has been created on the site.  All structures are in their original locations.  During the summer, visitors can see weapons demonstrations and living-history programs.

Fort Vancouver National Historic Site has three units.  One is the main fort.  The second site is the McLoughlin House National Historic Site.  John McLoughlin is often remembered as the “father of Oregon.” McLoughlin was the head trader for the Hudson’s Bay Company and donated large sums of money and land to the development of the Oregon Territory.  The third site is the Pearson Air Museum.  Pearson is a small aviation museum that looks at the history of the Pearson Air Field and Vancouver Barracks.

How to get to there: Fort Vancouver is located along the Columbia River in Vancouver, WA. It is located just off I-5. The McLoughlin House Unit is located in Oregon City, OR, and just off I-205. The units are 25 miles apart.

Where to Stay: There are many options to stay in Vancouver, WA, and Oregon City, OR.

John Day Fossil Beds National Monument is made up of three units in east-central Oregon.  Each of these units protects an important geological fossil layer from about 45 million years ago and 5 million years ago.

Today John Day is a semi-desert shrubland with colorful badlands and a riparian zone in the John Day River Basin.  The area supports a range of flora and fauna from cactus to grasslands to willow trees.  Over 50 species of birds have been seen in the park along with a range of mammals such as elk, raccoons, and coyotes.

The state of Oregon bought the land in the 1930s and created state parks.  On October 8, 1975, the three state parks were combined to make John Day Fossil Beds National Monument.

Where to Stay: There are a few options in the towns of Mitchell, Dayville, Kimberly, Fossil and Antelope.

Lewis and Clark National Historical Park preserves the Lewis and Clark Expedition’s 1805-1806 winter encampment site.  The area protects a replica of Fort Clatsop and other Oregon coastal sites associated with the encampment.  These sites include the Fort to Sea Trail, Clark’s Dismal Nitch, Netul Landing, Saltworks, and Station Camp.

This site celebrated the completion of Lewis and Clark’s Corps of Discovery and is a must-visit on an Oregon Coast Road Trip.  They reached their goal of reaching the Pacific Ocean.  Once here, they spent the winter before heading home to share their discoveries.  They built a small fort called Fort Clatsop for the winter.  While there, they developed relationships with the indigenous people before heading back east.  When they left Fort Clatsop, they turned the fort over to the local tribe.

How to get there: The Visitor Center is located off Highway 10 near the Lewis and Clark River.

Where to Stay: There are many hotel options in Warrenton and Astoria, OR.

The park is headquartered in Spalding, Idaho.  It was created on May 15, 1965.  Management of the 38 sites is split between NPS and several other federal and state agencies.

There are four sites in Oregon. These are Dug Bar, Joseph Canon Viewpoint, Old Chief Joseph’s Gravesite, and Lostine Campsite.

How to get there: There are 38 different sites spread out between Montana, Idaho, Oregon, and Washington. Look at the park map to figure out the best routes to the sites.

Where to Sta: Many of the towns near the sites offer accommodation options.

Hidden under the Siskiyou Mountains is a unique cave system.  Oregon Caves are not your typical cave.  Instead of being formed in limestone, it is formed in marble.  Only a handful of US caves are made in marble.  While the marble was formed over 160 million years due to pressure and heat, the care is estimated to be a couple of million years old.

This amazing cave is protected by the Oregon Caves National Monument and Preserve.  This monument preserves and protects the Oregon Cave system and the biodiversity of the Siskiyou mountains.  Visitors to Oregon Caves can take guided tours of the cave along with a range of hiking. Guests can spend the night at the historic Chateau at Oregon Caves.

Oregon Caves National Monument and Preserve was created in 1909.  The site was transferred to NPS in 1931.

Things to do: Cave Tours, Hiking, Wildlife Viewing, and Hunting

How to get there: The Caves can be reached via OR-46.

Where to Stay: There is lodging available in the monument at the Chateau at the Oregon Caves and in the nearby the town of Cave Junction.

The California National Historic Trail is a massive 5,000-mile trail and runs through 10 different states.  This trail retraces the overland routes over 250,000 emigrants took to reach the fertile farmlands and famed gold fields of California in the 1840s and 1850s.

Unlike some of the other trails of the National Trails System, the California Trail isn’t a single hiking trail. It is a disconnected series of hiking trails, roads, and sites.  Many of the US highways follow the wagon trail the settlers created as they rushed to California.  Emigrants had a choice of routes across the United States.  These trails start in Missouri and Nebraska. They then run through Kansas, Colorado, and Wyoming before splitting into Idaho and Utah.  They go through Nevada and into California and Oregon.

How to get there: The route runs from Missouri and Nebraska to California and Oregon. The various trail routes are approximately followed by various Highways and Interstates.

Where to Stay: There are lots of options for lodging along the trail.

The Ice Age Floods National Geologic Trail will massive auto/hiking trail that follows the geological effects of the last ice age.  The trail branches out and sections run through the states of Washington, Oregon, Idaho, and Montana. The trail was designated in 2009 and much of the trail is still being formally developed.

At the end of the last ice age, a sheet of ice blocked several important rivers such as Clark Fork and Columbia.  These ice dams caused the water to back-up and created massive flooding. The effect of this flooding can be seen in massive canyons such as Columbia River Gorge and Wallula Gap.

How to get there: The sites are located through Oregon, Montana Idaho, and Washington.

Things to do there: Hiking, Auto Tours, Museums,

Roughly 400,000 people packed up their lives into covered wagons to follow the Oregon Trail.  Several stops along the Oregon Trail are their own national park sites such as Scotts Bluff National Monument, Fort Laramie National Historic Site, Hagerman Fossil Beds National Monument, and Fort Vancouver National Historic Site.  Many other sites are within a couple of hours drive of the trail.

How to get there: The sites are located in every state the trail runs through.

Entrance Fee: There may be nominal fees at  trail-related federal, state, or locally owned historic sites and interpretive facilities.

There are 6 National Parks in Oregon and they received 943,000 visitors in 2020 and generated over $105 million in tourism economic benefits. The majority of visitors visited Crater Lake National Park.

Oregon is home to 254 State Parks.

How many national parks are in Oregon?

What are the names of the national parks in Oregon?

Here are the names of the national parks in Oregon.

Why is Mt Hood not a national park?

Mt. Hood is part of Mt. Hood National Forest and is under the management of the US. Foresty Service. There was a push in the 1940s to get the national forest declared a National Park but it was difficult to get support during WWII and the logging industry opposed the move. The initiative failed and there hasn’t been a serious push since.

Is Crater Lake the only national park in Oregon?

Yes, Crater Lake is the only national park in Oregon. Although there are 5 other NPS units with various other titles.

Final Thoughts on the National Parks of Oregon