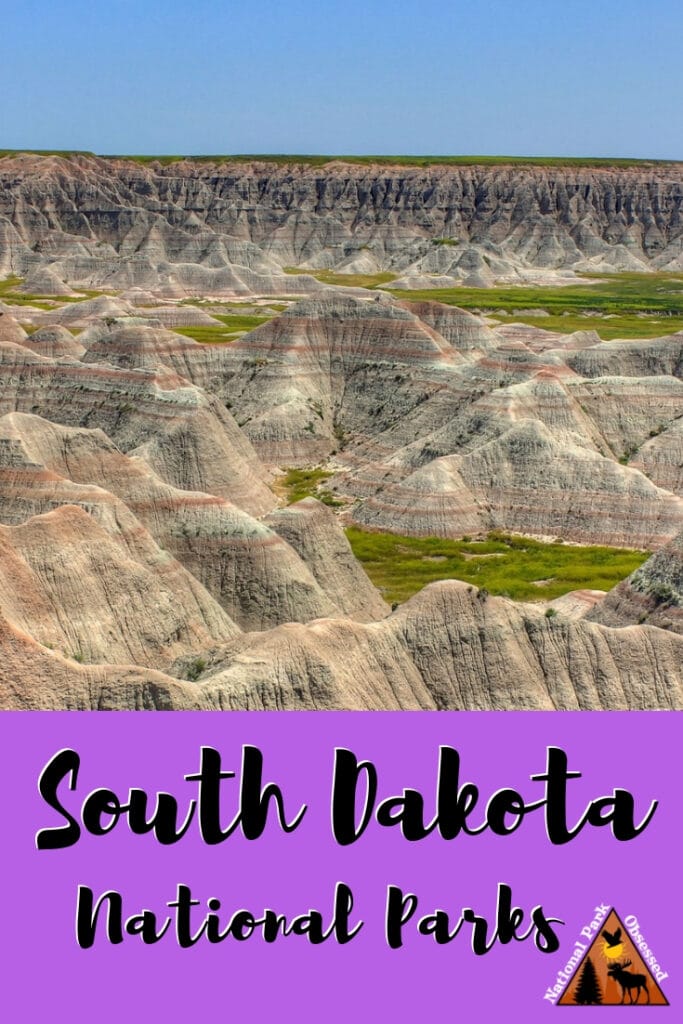 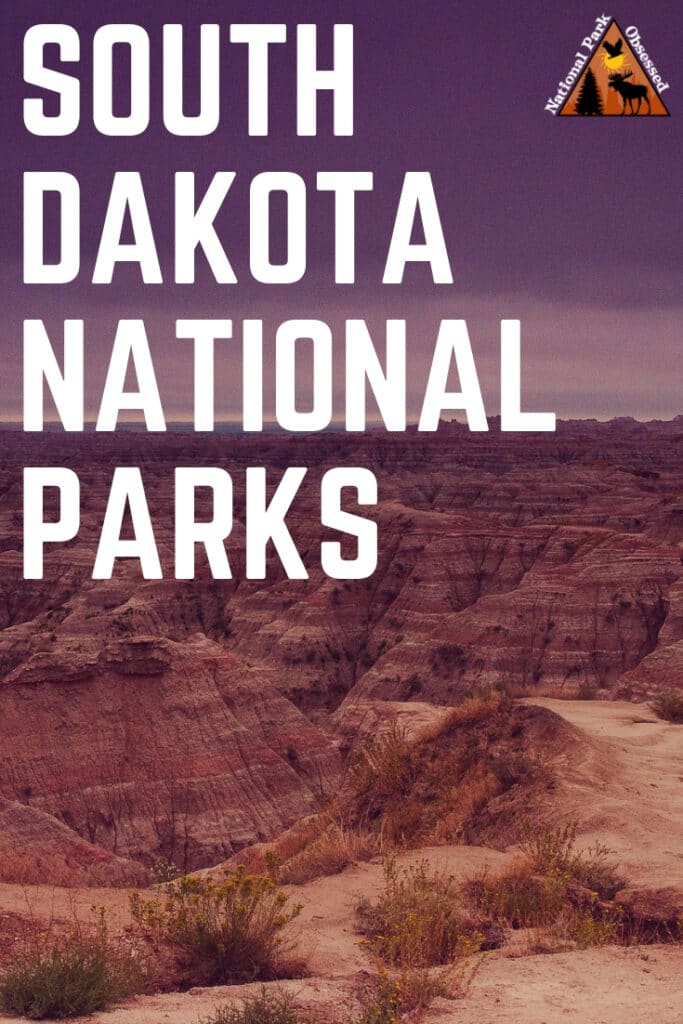 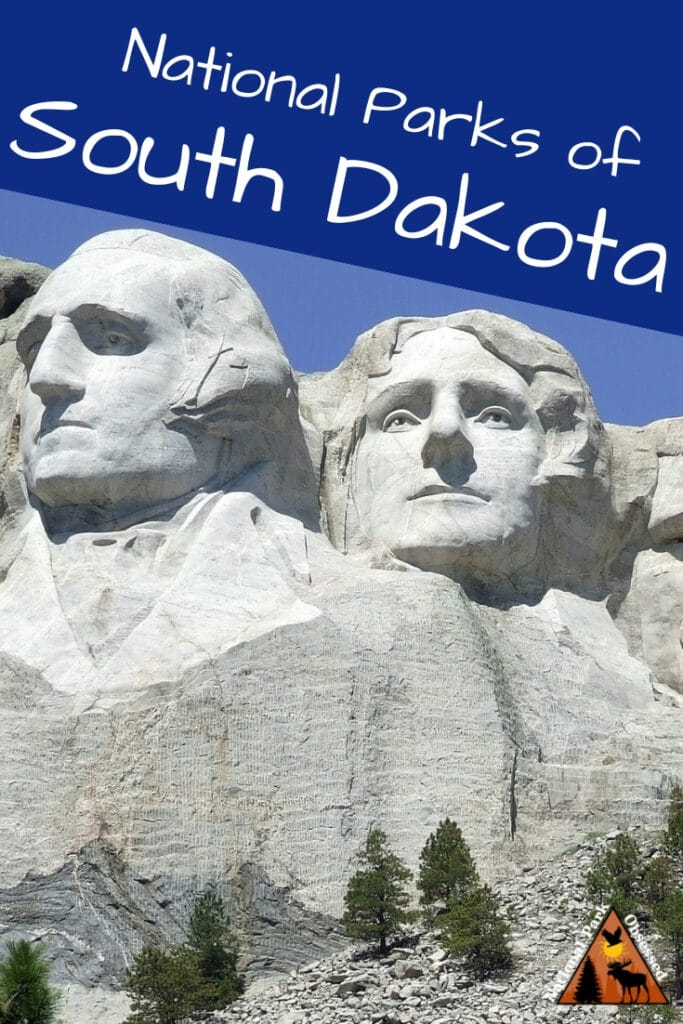 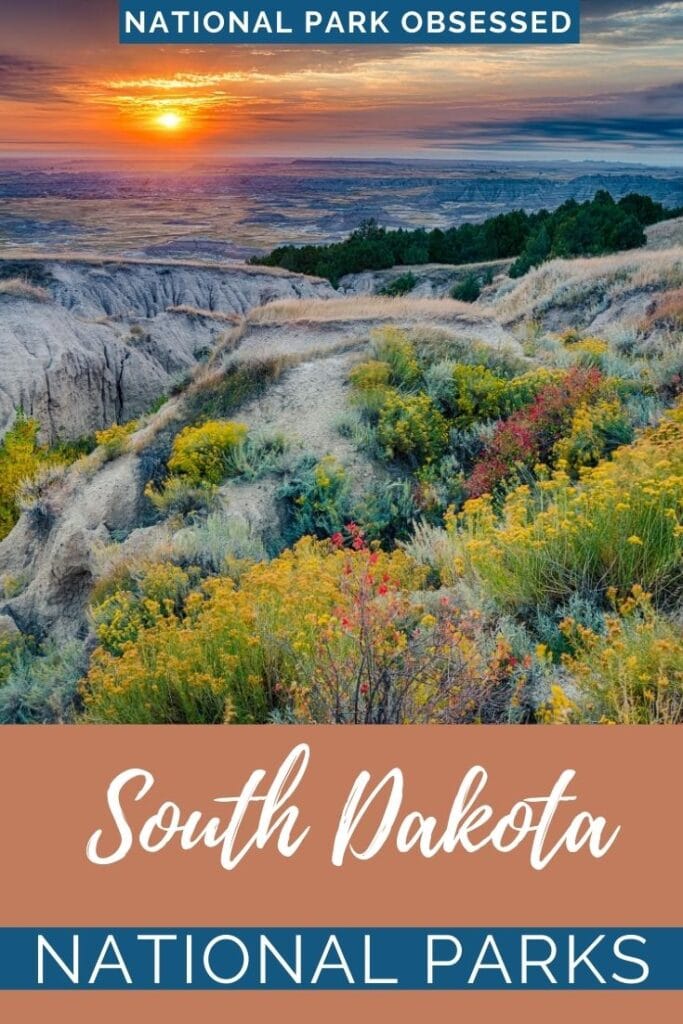 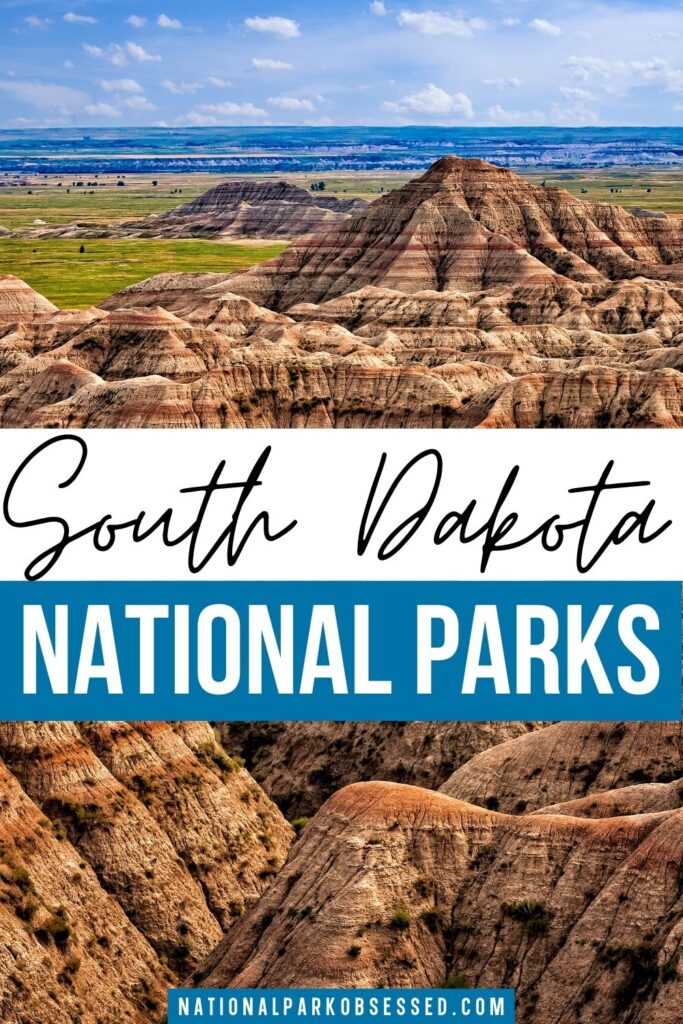 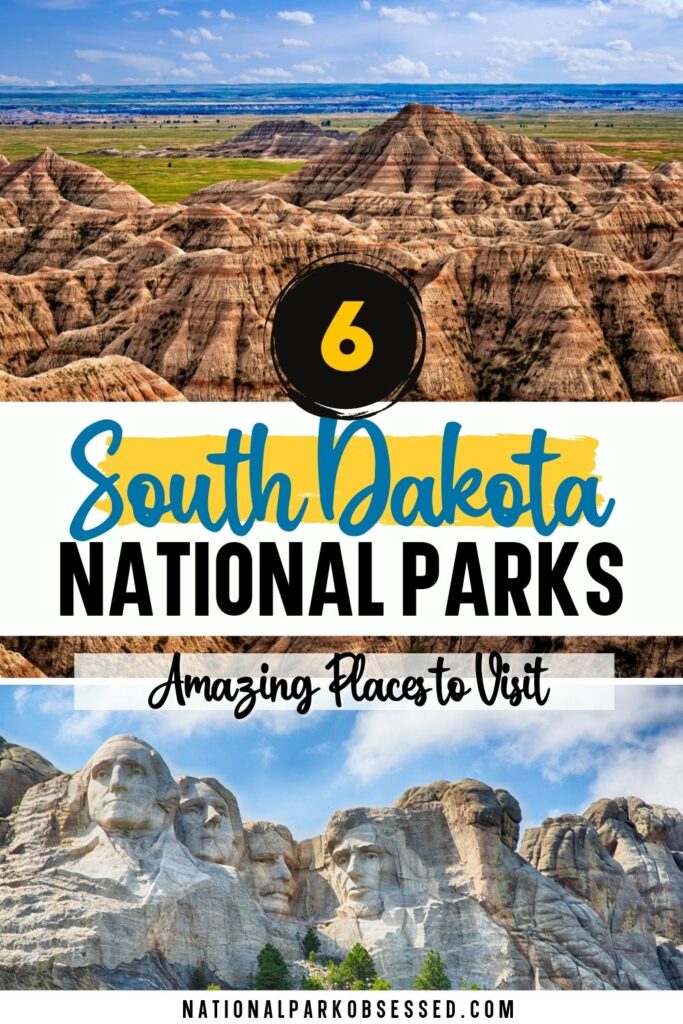 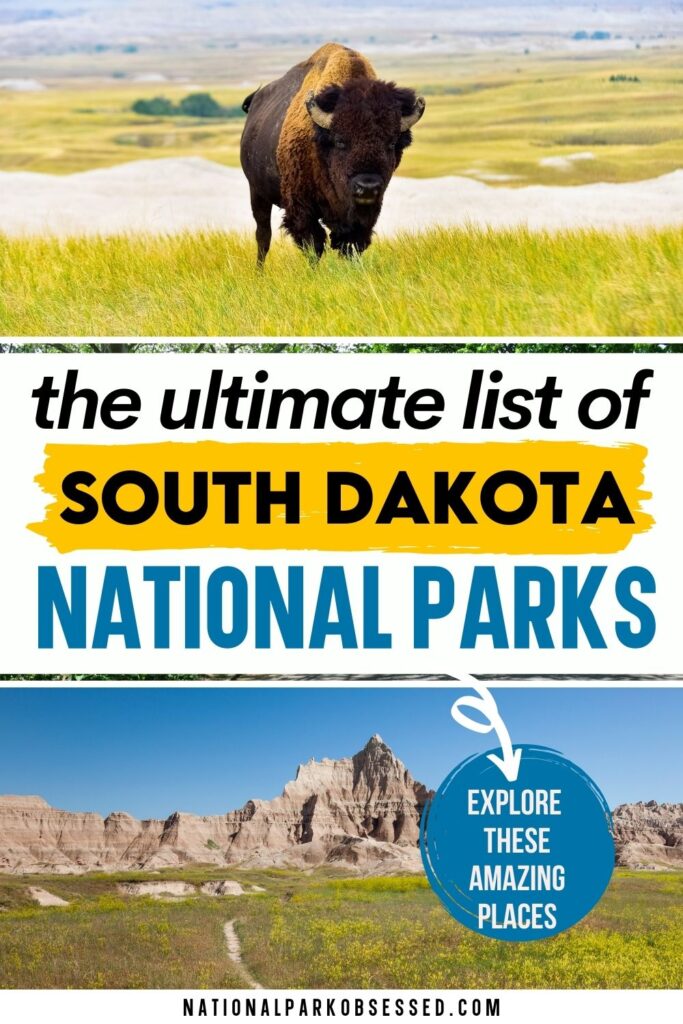 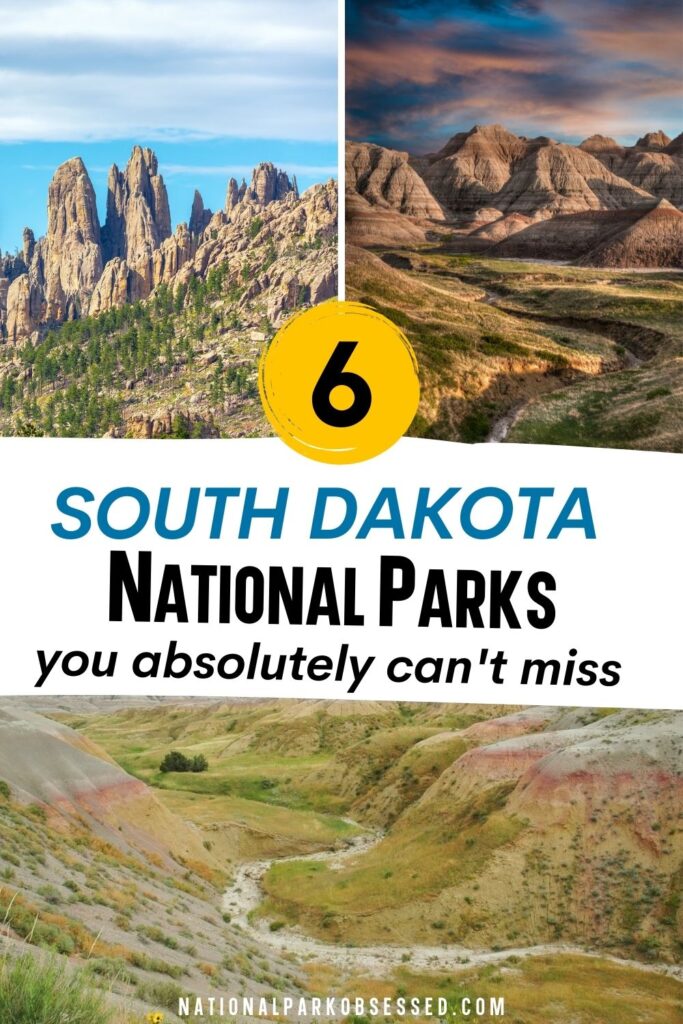 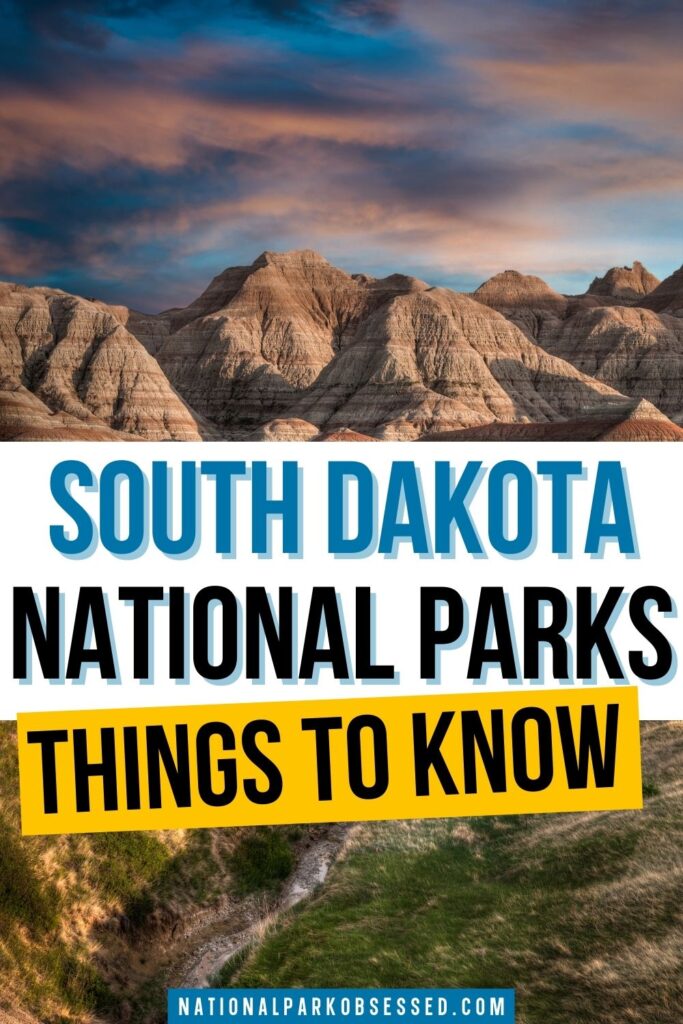 The state of South Dakota has a lot to offer. Between the Great Plains, the Black Hills, and Badlands National Park, each region of South Dakota offers a unique set of outdoor adventures. There is no shortage of opportunities for adventure seekers. The Missouri River also runs through the state, making it the perfect place for fishing enthusiasts. South Dakota is an excellent destination for those who are looking to reconnect with nature or spend time with family in a quiet setting. Let’s explore the 6 National Parks in South Dakota.

In this South Dakota guide, we will cover:

Badlands National Park is located just east of the famed South Dakota Black Hills.  The Badlands is a special place where the landscape limited development.  The landscape is rugged terrain full of spires, eroded buttes, and pinnacles.  This landscape hides a secret.  The area is one of the richest fossil beds in the world.  Fossils of hornless rhinoceros, three-toed horses, deerlike creatures, and saber-tooth cats have been found.

The park is split into two units.  The north unit is managed by NPS and the south unit is managed by NPS with the Oglala Lakota tribe.  Most visitors will spend time in the north unit were hiking trails, scenic drives and most visitor services are.  It isn’t uncommon for visitors to find fossils in the park.  Please leave them where you found them.  The southern unit is a sacred site to the Oglala Lakota tribe.  The 1890’s Ghost Dances and the tribe’s requests that visitors not touch or remove any objects tied to trees.

How to get there: Badlands is about 75 miles east of Rapid City. The park can be reached via I-90 and Highway 240.

Where to Stay: There are options at Wall and Interior, SD >> Check prices of nearby hotels on Booking.com or Hotels.com

Entrance Fee: $30 per vehicle or free with an America the Beautiful Pass.

Jewel Cave National Monument doesn’t look like much on a map.  The site is 1,273 acres (1.98 sq miles) in size yet the real wonder of this monument is hidden beneath the surface.  There is 200.3 mapped miles of cave in Jewel Cave National Monument.  Jewel Cave is currently the third largest cave in the world (and the second largest cave in the United States).  The cave is only accessible via a ranger-guided tour and there are two hiking trails in the park.

Jewel Cave gets its name from the calcite crystals.  This formation cove the cave along formations such as flowstone, draperies, and popcorn make this a special cave.  There are two main cave tours.  One is the Historic Lantern Tour with follows the original cave discovery route. The second is the Discovery tour which takes you down the caves great room.

How to get there: Jewel Cave is 13 miles west of Custer, SD along Highway 16.

Where to Stay: Custer, SD offers a range of hotel and lodging options. >> Check prices of nearby hotels on Booking.com or Hotels.com

Entrance Fee: Free, but cave tours are an additional charge not covered by the America the Beautiful Pass

Minuteman Missile National Historic Site is an unimposing site.  It is one of the smaller National Park Service Units.  The site is only 15 acres but they are important 15 acres.  Stand at the doors of the visitor center and look around.  The landscape looks much the same as it did in the 1950s.  However, for about 30 years starting in the 1960s, this barren landscape was home to 150 Minuteman Missiles and 15 launch-control centers.  These missiles were part of the Cold War’s nuclear arms race.

It was a time of great paranoia between the United States and the USSR.  And all it would take was 2 sets of young men to turn a few keys to launch all 15o missiles towards the USSR.  With the missiles away, the USSR would launch their own arsenal and both counties would have destroyed each other.  Thankfully, the fear of mutually assured destruction kept the missiles safely stored in their silos.

In the 1990s, Strategic Arms Reduction Treaty was signed and the Soviet Union fell. The missiles were decommissioned and most the silos were filled in.  It was decided to save underground missile silo D-01 (Delta One) and launch facility D-09 (Delta Nine).  These two sites plus a visitor center make up Minuteman Missile National Historic Site.  This site was established by November 29, 1999.

Things to do: Historical Tours

Where to Stay: The best place to stay in around Wall, SD. >> Check prices of nearby hotels on Booking.com or Hotels.com

Entrance Fee: Free, guided tours are an additional charge not covered by the America the Beautiful Pass.

Visitors will find the river wild and untamed much as Lewis and Clark saw on their expedition to the Pacific Ocean.  It is possible to launch canoes and kayaks to explore the river. Head to Ponca State Park and Niobrara State Park for visitor services.

How to get there: Missouri River can be reached from US 81 from Yankton, SD or US 52 via Wagner, SD.

Where to Stay: If not camping, then stay at Yankton or Wagner, SD. >> Check prices of nearby hotels on Booking.com or Hotels.com

Mount Rushmore National Memorial is one of the most famous statues in the United States.  It is one of the iconic images of America.  Mount Rushmore is the original “Saw on Instagram.”  The entire purpose of the site was to increase tourism to the region.  This massive sculpture was designed by Gutzon Borglum.  Borglum came up with the sculpture after being approached by historian Doane Robinson.

Borglum started work on the sculpture in October 1927 with the help of his son.  The plan was to depict Presidents George Washington, Thomas Jefferson, Theodore Roosevelt, and Abraham Lincoln from head to waist.  These four Presidents were selected by Borglum for their role in preserving the Republic and expanding the nation. Construction lasted until October 1941. The project ended due to lack of funds and Borglum had died in March 1941.  Lincoln Borglum oversaw the final stage of work after his father’s death.  In the end, only the heads were finished.

Where to Stay: Custer,SD has a range of lodging and food options. >> Check prices of nearby hotels on Booking.com or Hotels.com

Entrance Fee: Free but parking is $25. Parking fees are NOT covered America the Beautiful Pass.

Wind Cave National Park contains the 7th longest cave in the world. Wind Cave was the cave to be designed a national park in the world.  Wind Cave has 143.15 miles of mapped cave and is the world’s densest cave system.  Visitors should check out the three-dimensional maps in the visitor center to understand the size and complexity of Wind Cave.

Wind Cave gets its name from the airflow into or out of the cave.  If a high-pressure system is moving into the area.  Air will rush into the cave.  When a low-pressure system is present, air rushes out of the cave. Wind Cave is less than 30 miles from Jewel Cave, yet it is highly unlikely that these two caves are connected.  Jewel Cave has a different pressure and air doesn’t flow in and out of Jewel Cave the same way as Wind Cave. Wind Cave contains 95% of the world’s box work (a unique cave formation).

Visitors shouldn’t just focus on the cave when in Wind Cave.  Above ground is a network of hiking trails thru a natural mixed-grass prairie.  Bison, coyotes, and pronghorns are found throughout the grasslands.

Things to do: Hiking, Cave Tours

Where to Stay: Custer, SD is a little far but is really the best option for lodging near the park.>> Check prices of nearby hotels on Booking.com or Hotels.com

Entrance Fee: Free but guided tours are an additional charge not covered by the America the Beautiful Pass.

Lewis and Clark National Historical Park preserves the Lewis and Clark Expedition’s 1805-1806 winter encampment site.  The area protects a replica of Fort Clatsop and other sites associated with the encampment.  These sites include the Fort to Sea Trail, Clark’s Dismal Nitch, Netul Landing, Saltworks, and Station Camp.

This site celebrated the completion of Lewis and Clark’s Corps of Discovery.  They reached their goal of reaching the Pacific Ocean.  Once here, they spent the winter before heading home to share their discoveries.  They built a small fort called Fort Clatsop for the winter.  While there, they developed relationships with the indigenous people before heading back east.  When they left Fort Clatsop, they turned the fort over to the local tribe.

Entrance Fee: Free but various attractions along the trail may charge an entrance fee.

How many national parks are in South Dakota?

Does South Dakota have any National Parks?

What’s the name of the National Park in South Dakota?

Yes. No. Let’s go with it’s complicated. Mount Rushmore is a national park but it isn’t a National Park. National Park Service considers the 423 units they manage to all be national parks not matter what their title is.

RELATED POST: What is the difference between a National Monument and National Park.

Is Lewis and Clark National Historic Trail part of the National Park System?

The Lewis and Clark National Historic Trail is not an official until the National Park System. It is an associated unit, meaning that NPS helps with the management, but it isn’t part of the 423 units.

What other national parks are near Mount Rushmore?

Final Thoughts on the National Parks of South Dakota