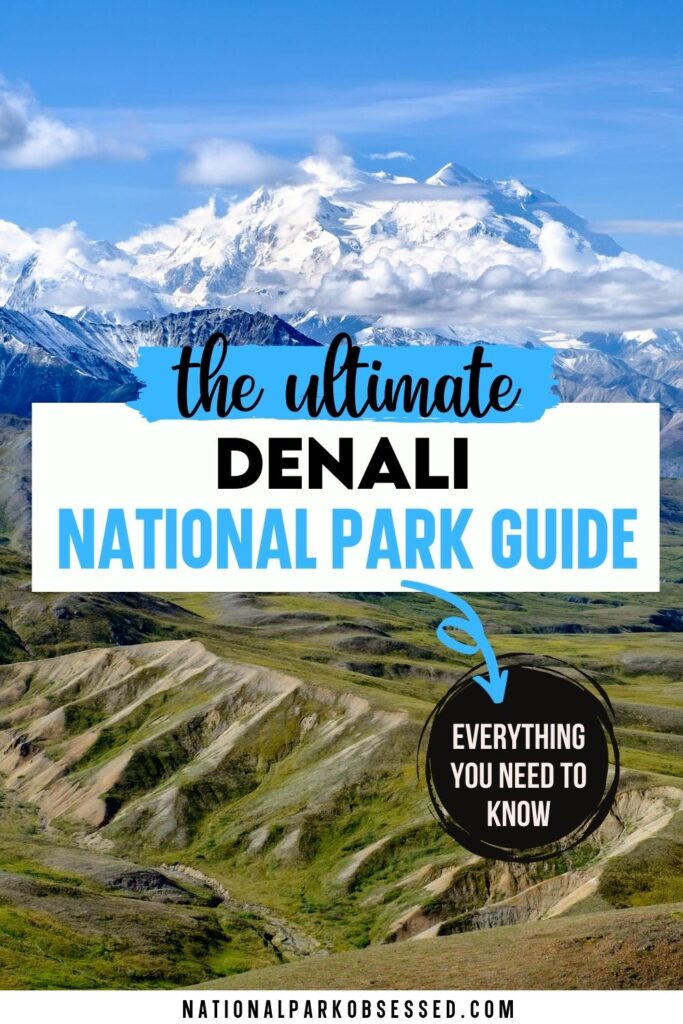 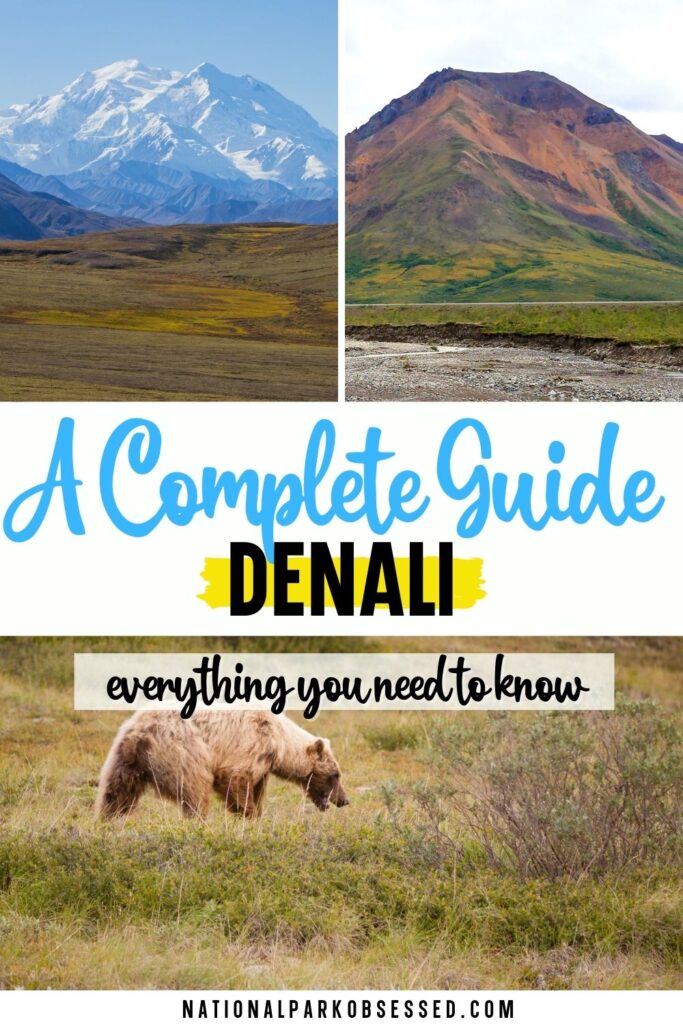 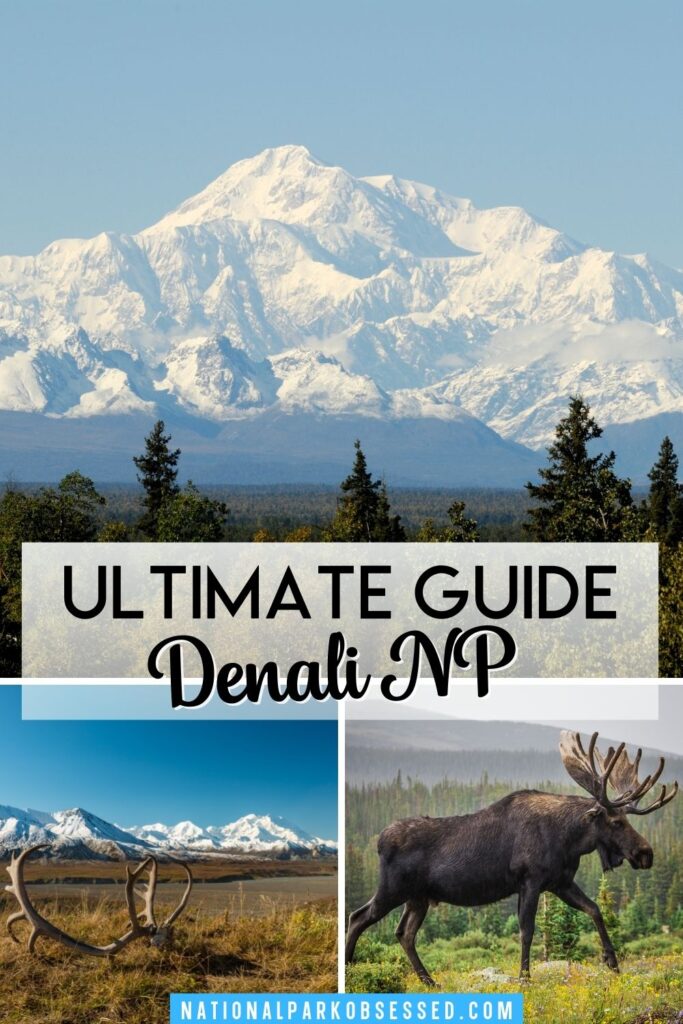 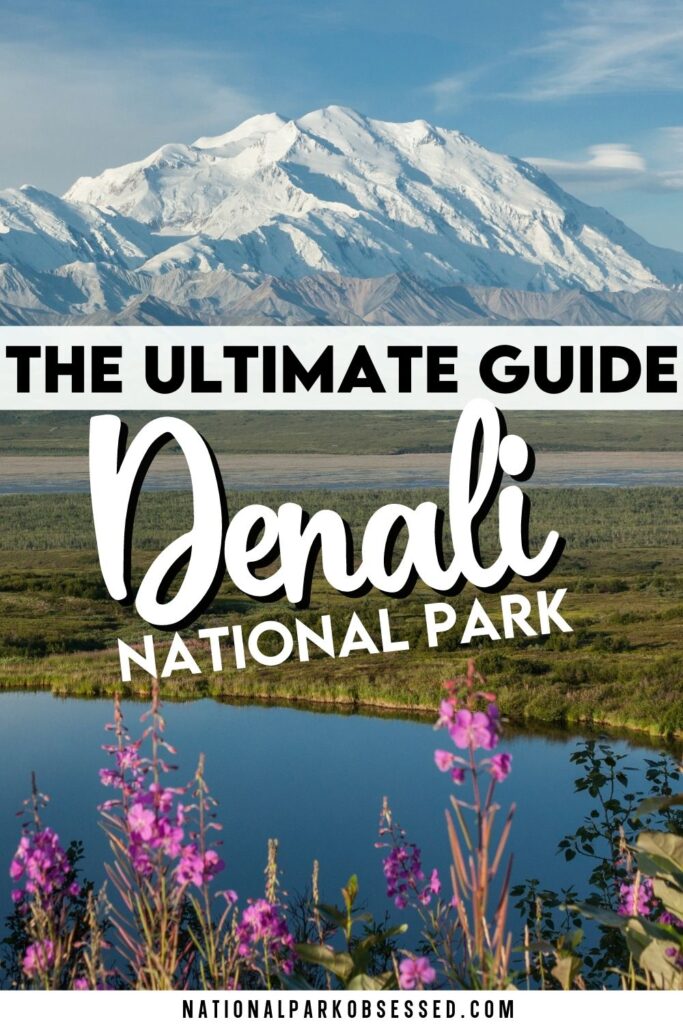 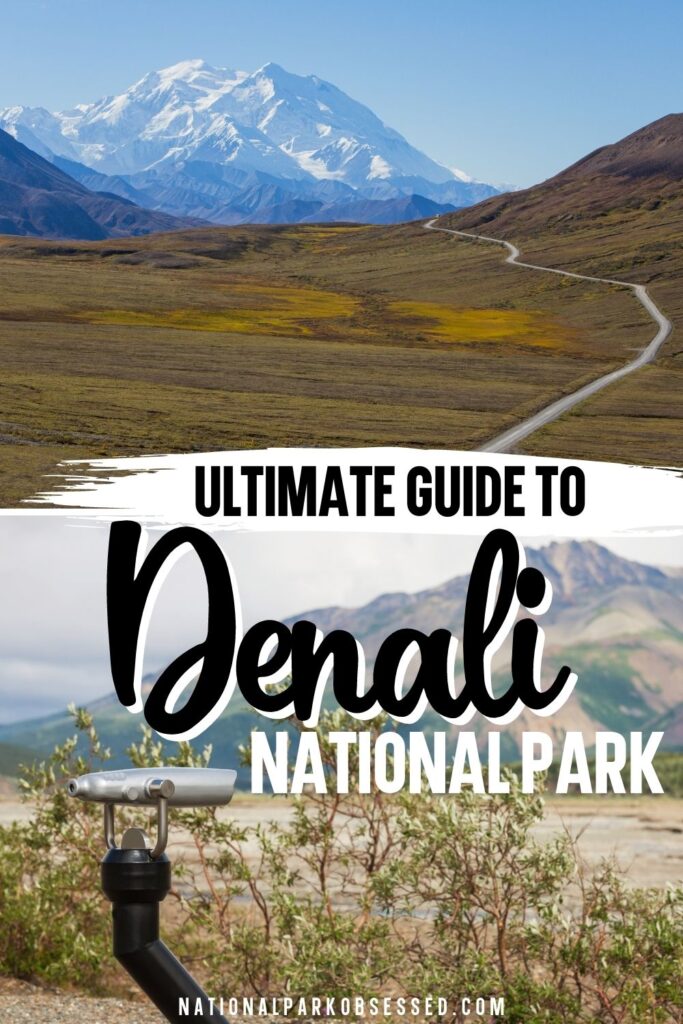 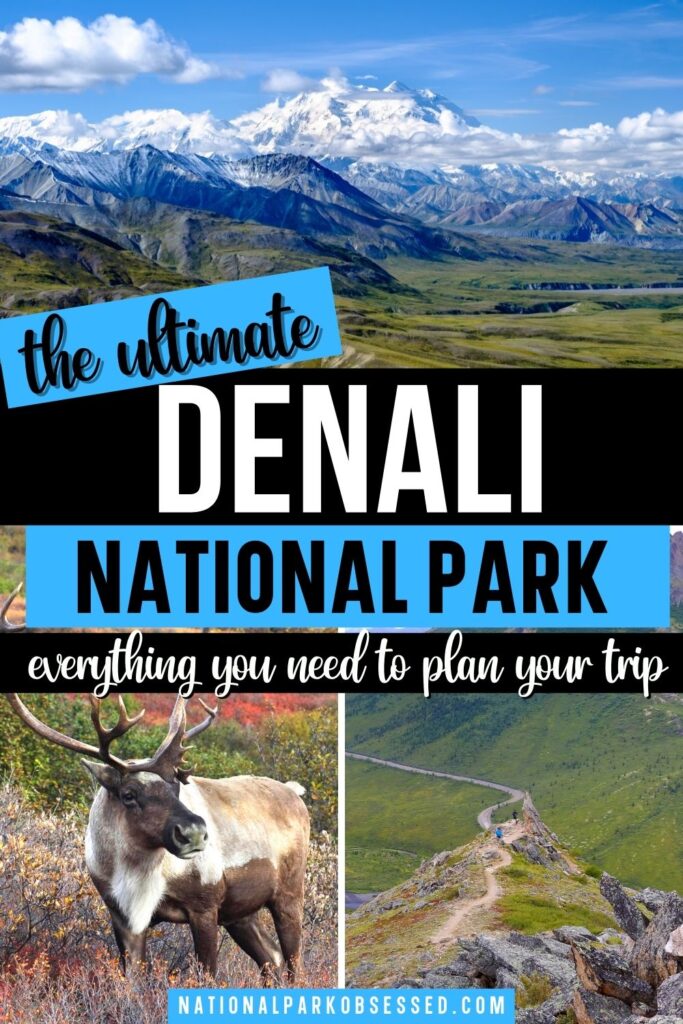 Denali National Park and Preserve is located in interior Alaska.  The Park and Preserve are two separate national park service units that are managed together.  They had slightly different rules and regulations but for the most part, are one and the same.  The units are named for the great mountain in the park.  Denali stands at 20,320 feet and is the highest mountain in North America.  The park was founded to protect the Dall sheep and their ecosystem from overhunting.

Update of the 2022 Summer Season in Denali – Due to the Pretty Rocks Landslide, the Denali Park road will be closed at Mile 43. This means that all park services past mile 43 (Eielson Visitor Center, Igloo Campground, Wonder Lake) will be closed. Additionally, the 2022 Denali Road Lottery is canceled. All Transit Buses and Tour Buses are limited to mile 43.

The Quick Guide to Visiting Denali National Park and Preserve

Funniest 1-Star Review: Couldn’t WAIT to see all the wildlife, saw 1 bear way in the distance and a couple of Dell Sheep that could have been dots of snow at the top of the hill. Total waste of time. It was a 6 hour tour and was so boring I fell asleep (along with half the others on the old bus) for a couple of hours. Didn’t even see a butterfly!

How much does Denali National Park Cost?

An annual Denali National Park Pass costs $45 but it is not recommended you buy this pass. For an extra $35 you can get an American the Beautiful Pass. This $80 pass offers free admission to all 116 fee-charging National Park Units.

When is Denali National Park Open?

Yes, pets are welcome in Denali National Park but are limited to developed areas such as roads, parking areas, picnic areas, and campgrounds. Pets are not allowed on the trails or in the wilderness within the park. Please review the Denali Pet Policy before bringing your dog to Denali.

Denali Visitor Center – May to September

Eielson Visitor Center – May to September

Denali Bus Depot – May to September

When was Denali National Park Created?

Denali National Park and Preserve was created on February 26, 1917, as Mount McKinley National Park. The original park boundaries included just of a portion of the current park.

We protect intact, the globally significant Denali ecosystems, including their cultural, aesthetic, and wilderness values, and ensure opportunities for inspiration, education, research, recreation, and subsistence for this and future generations.

When to Visit Denali National Park

Denali is busiest from May to September.

Denali National Park is located in interior Alaska and has a subarctic climate. The park has long winters and short summers. The summers are cool and damp with unpredictable weather. Snow can happen at any time of the year.

How to Get to Denali National Park

Where is Denali National Park Located?

Denali National Park is one of the easiest National Parks in Alaska to visit. The park is located in interior Alaska along the Parks Highway between Fairbanks and Anchorage, Alaska.

Below you’ll find my quick guide for getting to Denali, here is my detailed guide for how to get to Denali National Park.

Fairbanks has year-round service from Alaska Airlines and Delta. During the summer, there are flights from most major airline hubs including Chicago, Dallas, Denver, and San Francisco.

Anchorage has year-round service from Seattle, Atlanta, and Los Angeles. During the summer season, there are non-stop flights from 14 different states and several other countries such as China, Germany, and Russia.

Unless you live in Alaska, driving to Denali National Park will involve driving through Canada. You will need a passport and it’s a LONG drive.

The Alaskan Railroad offers service to Denali National Park year-round as part of their service of Anchorage to Fairbanks. From mid-May to mid-September, there is daily service. During the rest of the year, there is weekend and midweek service. Here is the Denali Train schedule. The train ride is 7 hours from Anchorage and 4 hours from Fairbanks.

The Alaskan Park Connection Motorcoach offers bus service between Anchorage and Denali from June to mid-September.

What kind of rental car do you need for a Denali National Park Road Trip?

Unless you are driving the Denali Road Lottery, any rental vehicle you would like will work to drive from Anchorage or Fairbanks.

I book most of my rental cars through RentalCars.com. They have a great selection of rental cars from most major agencies and the best prices – check prices here.

Things to do in Denali National Park

Denali National Park doesn’t have a huge number of maintained hiking trails but its trails showcase some of the amazing landscapes of this park. There are 20 hiking trails in Denali. Here are some of my favorite –

Unlike many other national parks, off-trail hiking is allowed and encouraged in Denali. Visitors can hike anywhere they would like in the wilderness areas of the park.

IMPORTANT: Do NOT stamp your government issued passport.

There are 2 official stamps in Denali along with a handful of bonus stamps in the park.

Here are all the locations where you can find the Denali National Park Passport Stamp.

Denali Visitor Center is located at Mile 1.5 Park Rd, Denali National Park, AK 99755. It is open from May 15 to September 20. Stamps located here:

What is the best way to see Denali?

The best time of year to visit Denali National Park is early June to mid-September. The 92-mile park road is usually fully open and the weather is usually pleasant and the shuttle bus system is operating.

How many days do you need in Denali?

Ideally, you need two days to explore Denali. The bus tour into the park takes between 6-12 hours so its a full-day adventure. The second day gives you time to do some hiking and see the dog sled demonstration.

Is going to Denali worth it?

Yes, it is. The Indigenous peoples of the area knew the mountain was special and early explorers had similar experiences and advocated for the creation of the park. Think about it this way Alaska got its first National Park 42 years before becoming a state of the United States. That is how special of a place Denali and the surrounding area.

What is the best month to see Denali?

Can you explore Denali on your own?

Sort of. It is impossible to explore the interior of the park without using the shuttle bus system but you can easily explore on your own once you get inside the park. Visitors to Denali can hike anywhere they would like.

Where should I stay in Denali without a car?

I recommend staying at one of the cruise ship passenger-focused hotels. These hotels have regular shuttles into the park and some of the park tours offer pick-up at these hotels. These include Denali Bluffs Hotel, McKinley Chalet Resort, Denali Park Village and Denali Grizzly Bear Resort.

How long is the bus ride in Denali?

The bus ride in Denali is from 4.5 to 12 hours depending on how far you would like to go into the park. There are different tour and shuttle bus options depending on what you want to do.

What is the difference between Denali State Park and Denali National Park?

Can you see Northern Lights from Denali?

Yes, you can see the Northern Lights in Denali National Park. Nothern light season starts in early September to late April. The Northern Lights are only visible once the sun starts to dip below the horizon long enough to get dark.

Is there cell service in Denali?

Cell service in Denali National Park is very limited. There is only cell service access along the first 3 miles of the park road. Beyond those 3 miles, there isn’t reliable cell service by any carrier.

Are there Ubers in Denali?

There is a 2017 article about the first Uber driver in the Denali area. I cannot find any information on if he is still operation or if others have joined him. But cell service can be spotty within the park so I wouldn’t rely on uber to get to and from your hotel to the visitor center.

Do you need a car in Denali National Park?

Check out nearby National Park Service Sites (accessible by air from Anchorage):

Check out nearby National Park Service Sites (accessible by air from Fairbanks):

Do you have any questions about Denali Natonal Park or need help planning your National Park trips. Let me know in the comments or join me in my National Park Trip Planning Community!

Pin for Later: Visiting Denali National Park and Preserve: The Complete Guide for 2022