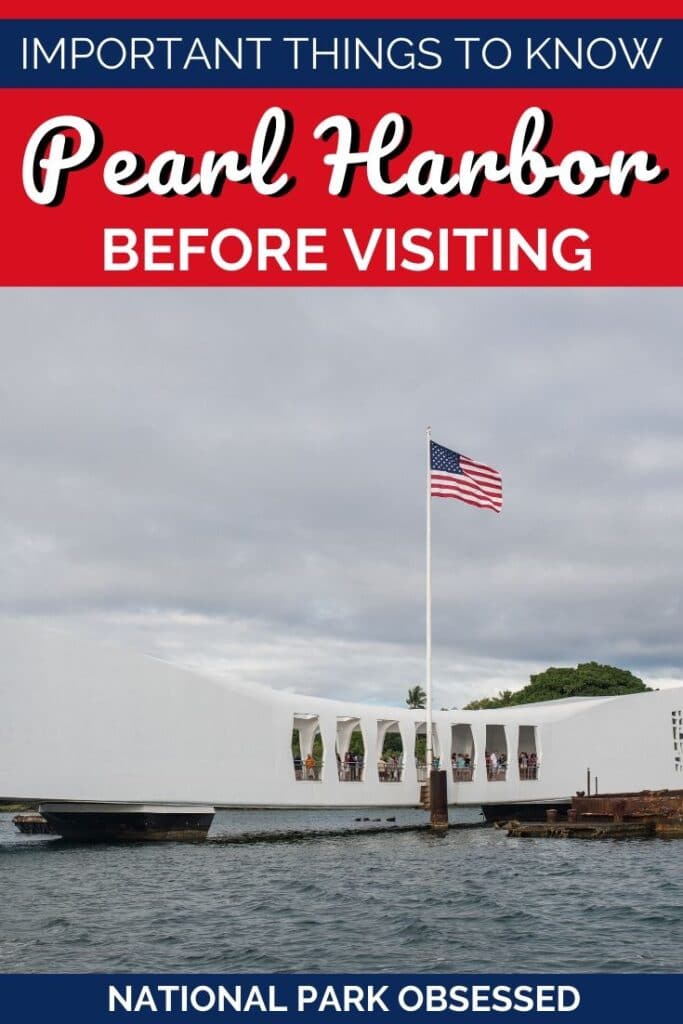 Hawaii is a great vacation spot.  The islands offer a ton of fun under the sun. The white beach and volcanos make it easy to forget that Hawaii plays a significant role in United States history.  The islands were the sight of one of the most infamous events in United States history.   In the early morning of December 7, 1941, the Empire of Japan launched a surprise attack on the U.S. military bases on Oahu.  This attack was one of the largest and deadliest attacks on American soil.  The attack drug the United States into World War II.  Every tourist to Oahu should take time to visit Pearl Harbor.  Here are 10 things to know when visiting Pearl Harbor.

How to get to Pearl Harbor

Pearl Harbor is located about 9 miles from Honolulu near the Daniel K. Inouye International Airport.  The memorial is located just off the H3, H201, and H1 interchange.

If you have a rental car, then there is easy access to the memorial. It is a quick 20-minute drive from downtown (assuming normal traffic conditions).   There are several parking areas at the memorial.  Parking is free and regularly patrolled by security.

Pearl Harbor National Memorial is easily reached by public transportation. TheBus is the City and County of Honolulu’s transit service. Bus routes 20 and 42 provided regular service from the Waikiki and downtown Honolulu area directly to the Pearl Harbor Visitor Center.  Expect a bus trip to take an hour plus each way.  The bus costs $5.5o per person for a 1-day pass.

A taxi or rideshare to the Pearl Harbor Memorial starts at $20 each way depending on the time of day and your hotel location.

If you want to make your trip to Pearl Harbor Memorial as easy and simple as possible, check out these amazing Pearl Harbor Day Trips:

Spend the day at Pearl Harbor

Make Pearl Harbor National Memorial a day trip from Honolulu.  Pearl Harbor is more than just the USS Arizona Memorial.  It is a complex of museums and memorials that explores both the events of December 7, 1941 and World War II.

There are museums surrounding the visitor center with the option of going to Ford Island. There is an exhibit about the events leading up to Japanese attack and a second exhibit covers the events of the attack and includes first-person accounts of the attack.   There are several other memorials around the site such as the Waterfront Submarine Memorial.  The USS Bowfin Submarine Museum & Park detail the history of Submarine warfare and provide the opportunity to climb aboard the USS Bowfin.

If you take the bus to Ford Island, it is possible to visit the USS Missouri (a class BB-63 battleship).  The USS Missouri is a significant battleship as it was where Japan officially surrendered and ended World War 2. The Pacific Aviation Museum Pearl Harbor features authentic planes from WW2.  Most have been restored but a few are in the restoration process. 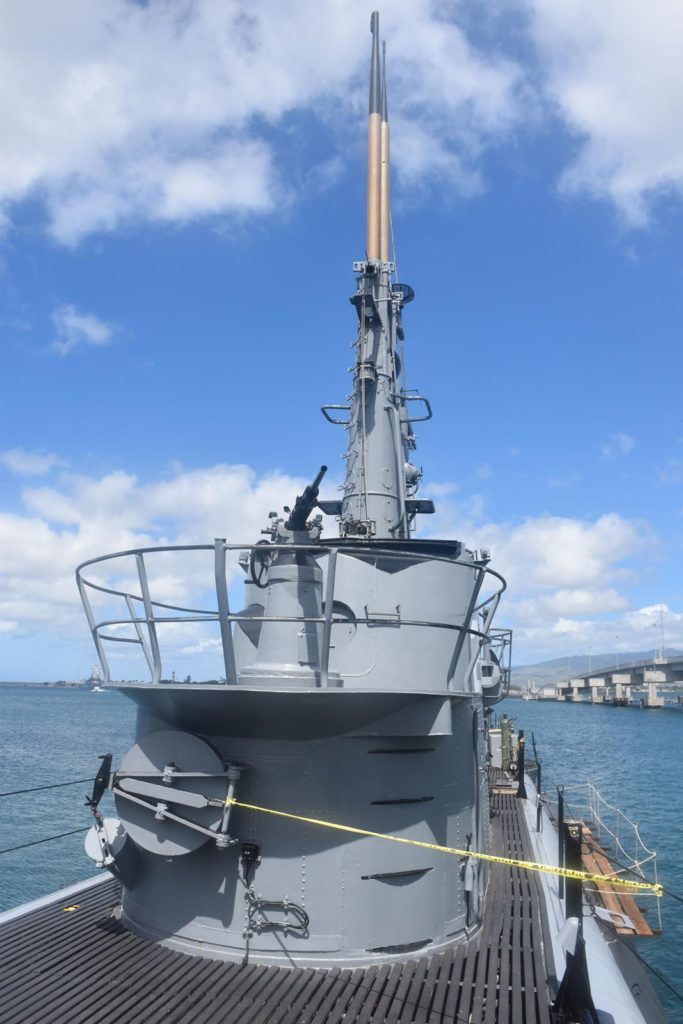 ***Visitor access to the USS Arizona Memorial is currently suspended due to necessary repairs.  Boat tours of Battlefield row are still being offered. As of July 1, 2019, NPS access to the memorial is expected to resume in Fall 2019.  An exact day has not been announced.  I read a couple of news articles that state the memorial would be re-opening shortly before the memorial ceremony on December 7, 2019.  I could not confirm this beyond those news articles.

If you know exactly what day you will be visiting the USS Arizona Memorial, make your reservation in advance.  You can make your reservation up to 2 months in advance at recreation.gov.  Tickets are free, but there is $1.50 process fee.  Tours often sell out fast so book as soon as you know (if you are planning on spending the day and can’t get a ticket don’t despair or change your itinerary just yet. See my next tip.) 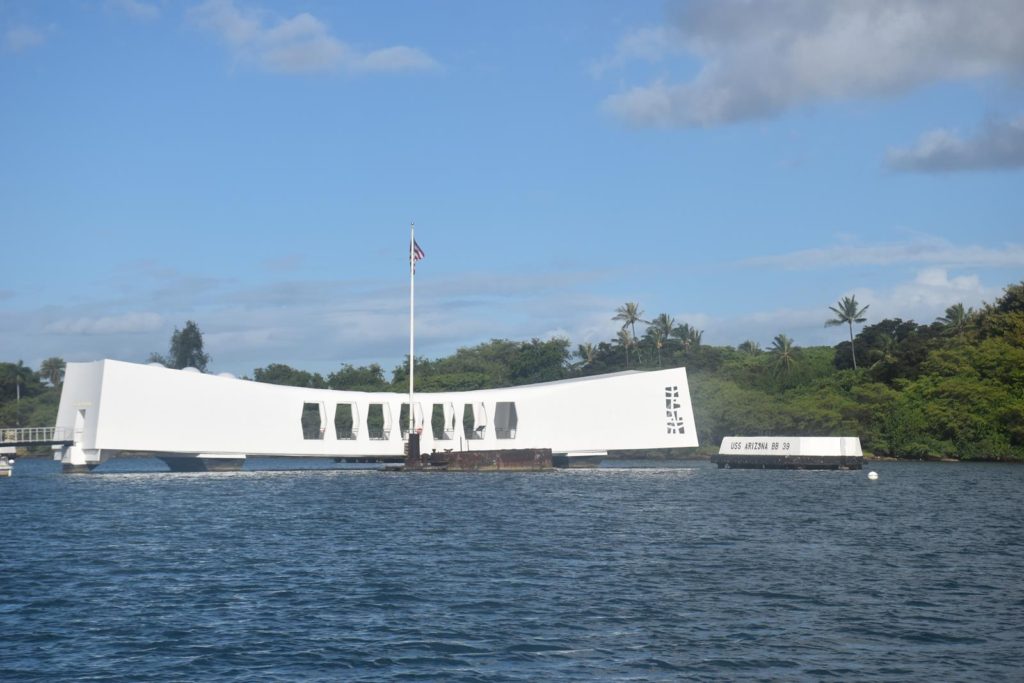 There are several reasons for this.  The most important is if you have not made a reservation for the USS Arizona Memorial. There are  1,300 walk-in tickets available every day. They are first come, first serve. The tours start at 7:30 am and run until 3:00 pm. They start handing these tickets out at 7:00 am sharp. The line for the tickets can begin forming as early as 5:00 am.  I got there around 6:45 am, and the earliest tour I could get on was 8:15 am. These tickets are usually gone by mid-morning. 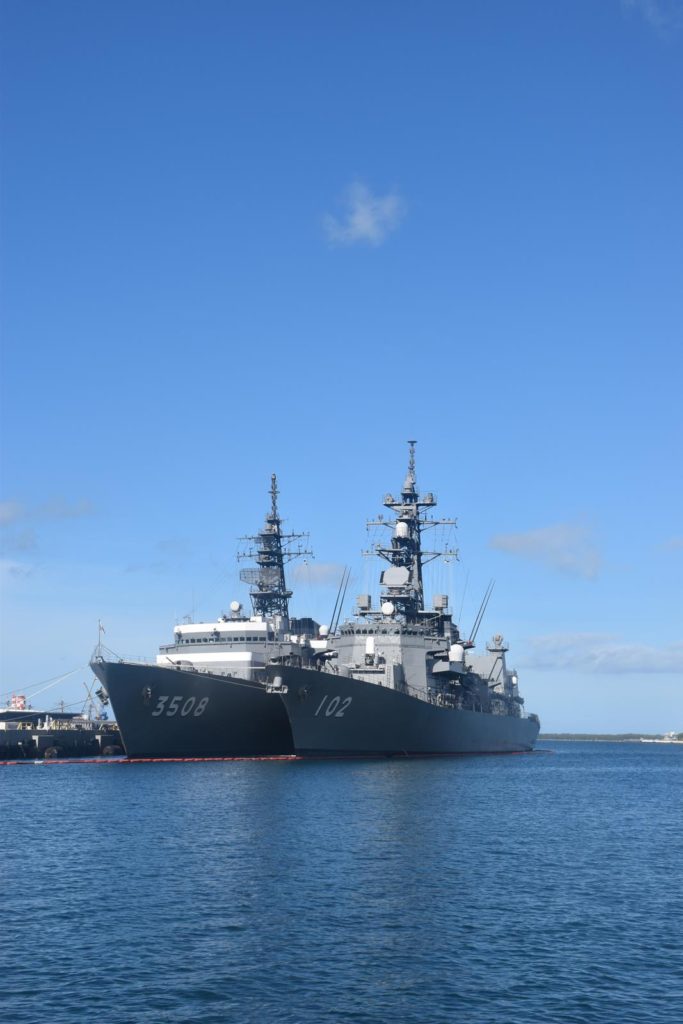 Purses and backpacks are not allowed in Pearl Harbor Visitor Center.  They are serious about no bags.  You are allowed to bring in a wallet (it must fit in a pocket, so no large wallets like many ladies carry). You are also allowed to bring in a camera and bottle of water.  Don’t bother bringing anything else.    If you choose to drive, leave everything else (sunscreen, spare batteries, etc.) in your car.  There is an onsite bag check.  For $4.00 they will store your bag while you visit the memorial. 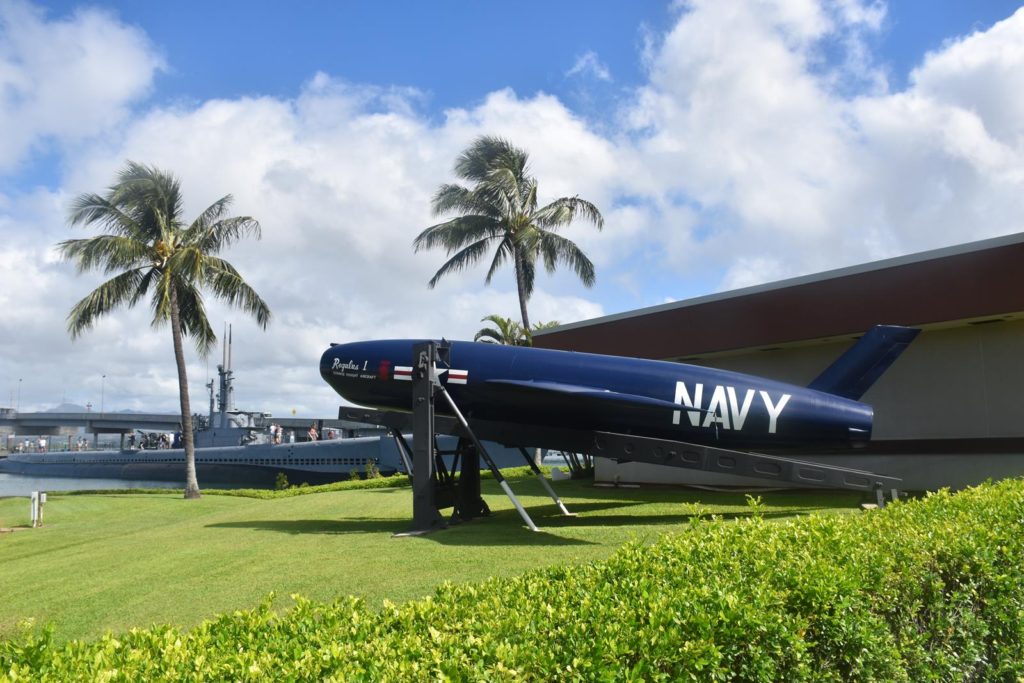 Buy Something From the Gift Shop 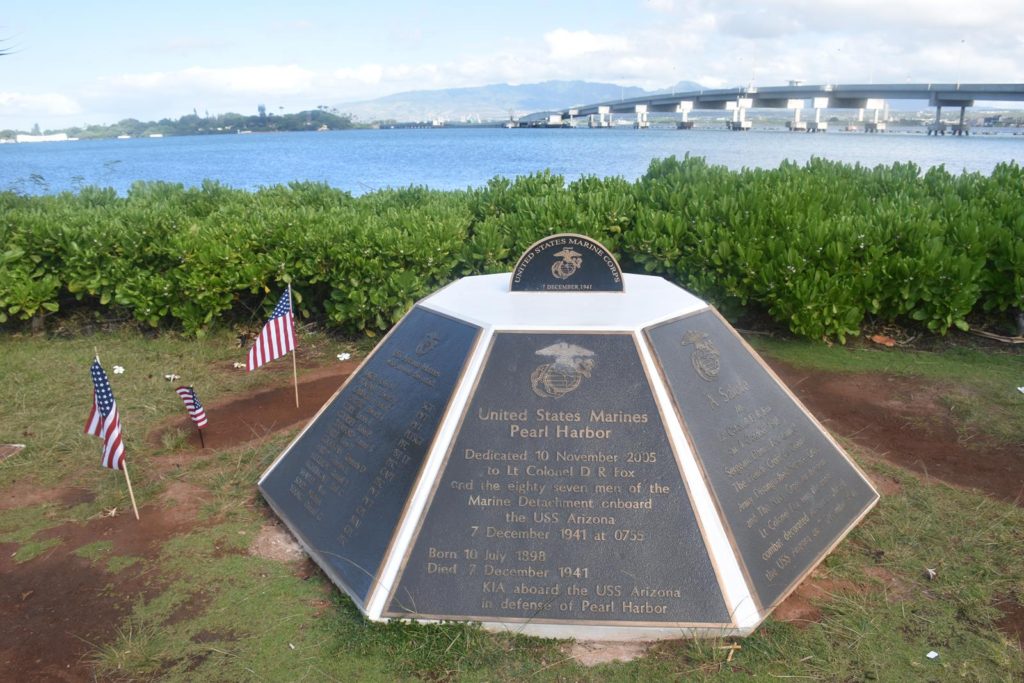 It’s Hawaii, you should be wearing sunscreen all the time, but nothing is worse than a sunburn while on vacation.  Most of the Pearl Harbor site is outside.  The weather can go from cloudy to sunny in an instant (plus its still possible to get a sunburn while it’s cloudy).  It is just better to be safe than sorry.  I would put sunscreen on before I enter the site then reapply every 3-4 hours during the day.  I would recommend getting some coral reef friendly sunscreen.  Regularly sunscreen has been shown to damage coral reefs.  There are lots of new lines of biodegradable sunscreens are available.

Please don’t wear your swimsuit.  This is a war memorial that honors the men and women who died during the 1941 attacks as well as those who died during the WWII Pacific Campaign.  The USS Arizona is a graveyard. Most the men who died on the ship are still entombed within her.  There is no published dress code but keep it respectful.   Shorts of a decent length and short sleeves are acceptable but keep it tasteful. 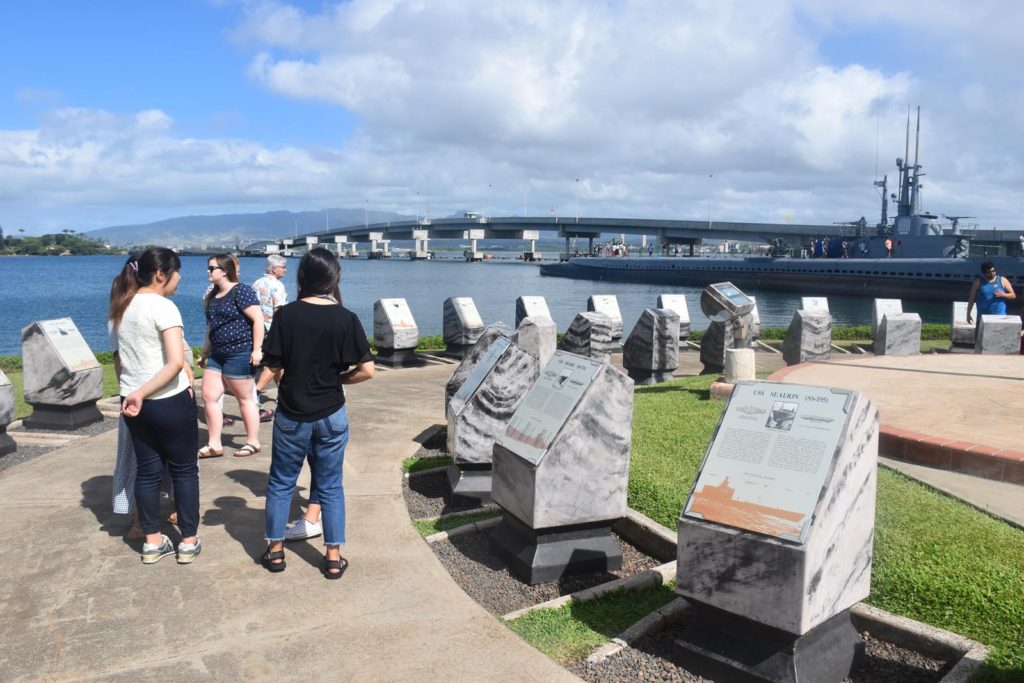 Micheal Bay’s movie on Pearl Harbor starring Ben Affleck and Josh Harnett takes significant liberties with the actual history of Pearl Harbor.  The whole movie is basically a love triangle with explosions that is very loosely based on a little history. 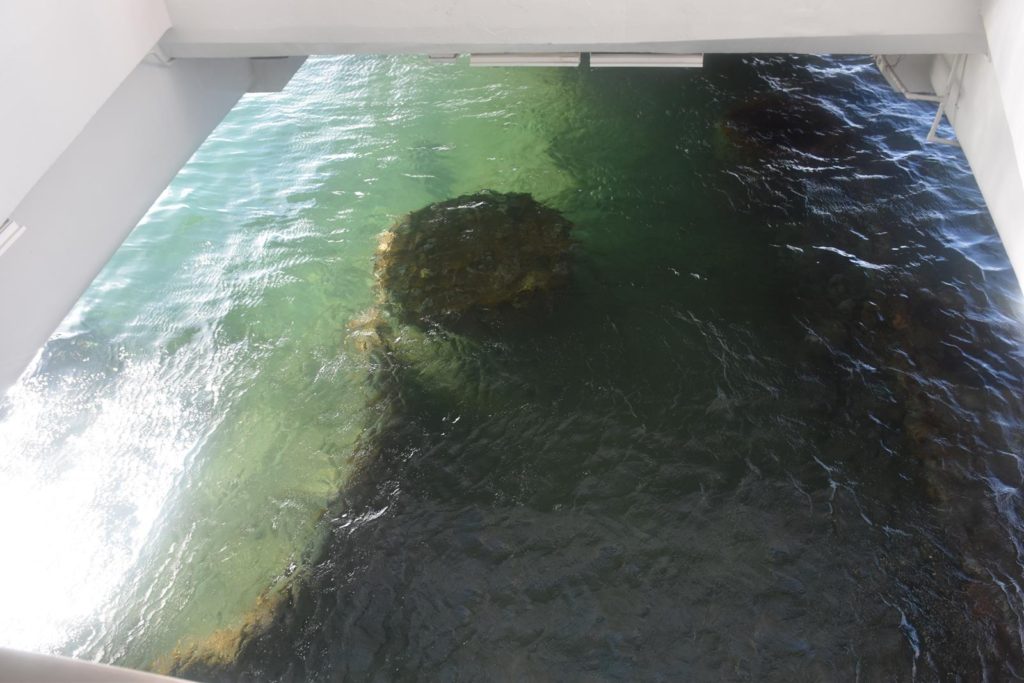 Pearl Harbor brought the United States into World War II.  It effects to the United States is felt event to this day.  Pearl Harbor brought about a sense of national unity that wasn’t seen again until the September 11, 2001, terrorist attacks.   That sense of national unity wasn’t all patriotic.  In the months after the attack, thousands of Japanese-Americans were rounded up and placed in internment camps throughout the United States.  Ironically, many young Japanese-Americans would go on to fight in the European theater.  Those units were some of the most decorated units in the European theater.

Pearl Harbor should be a place of remembrance for the men and women who died in during the war as well the dark side of the internment camps.

Do you have anything to know when visiting Pearl Harbor? 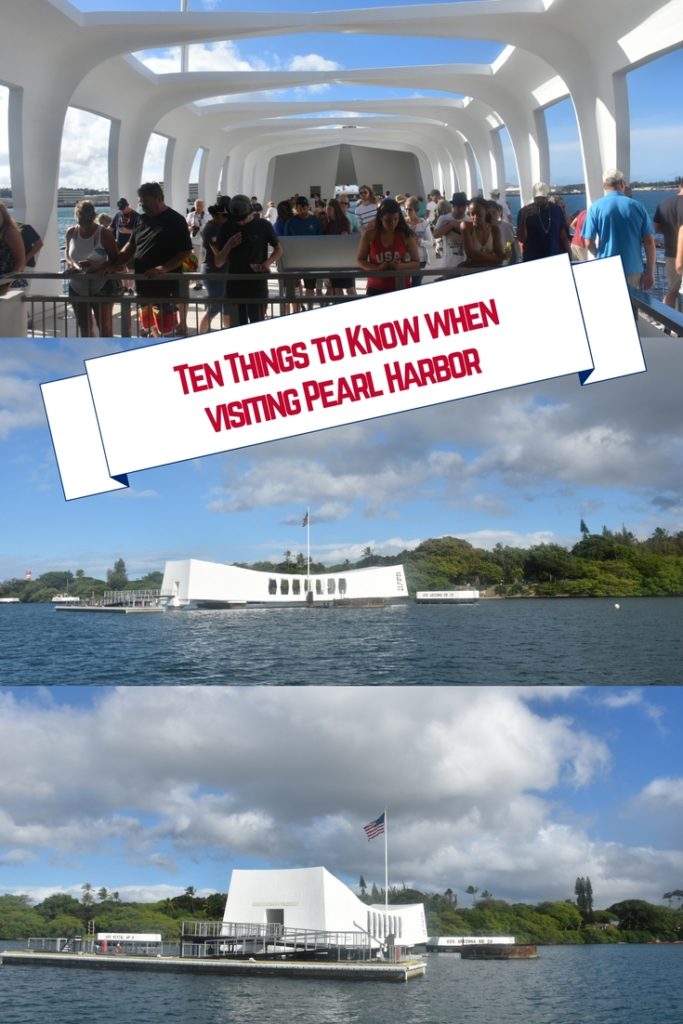