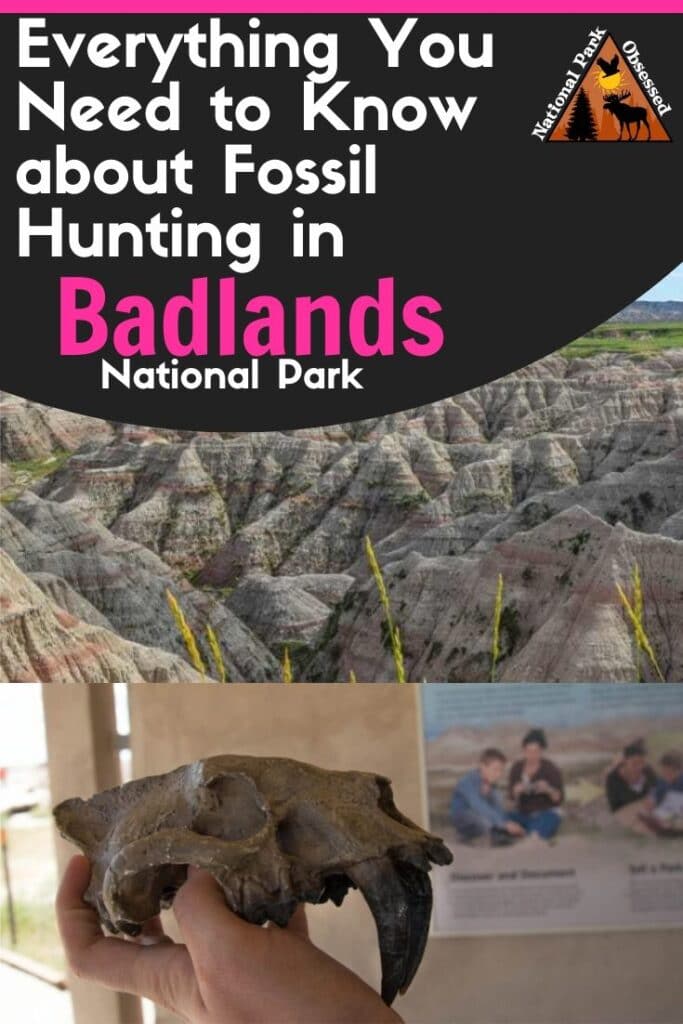 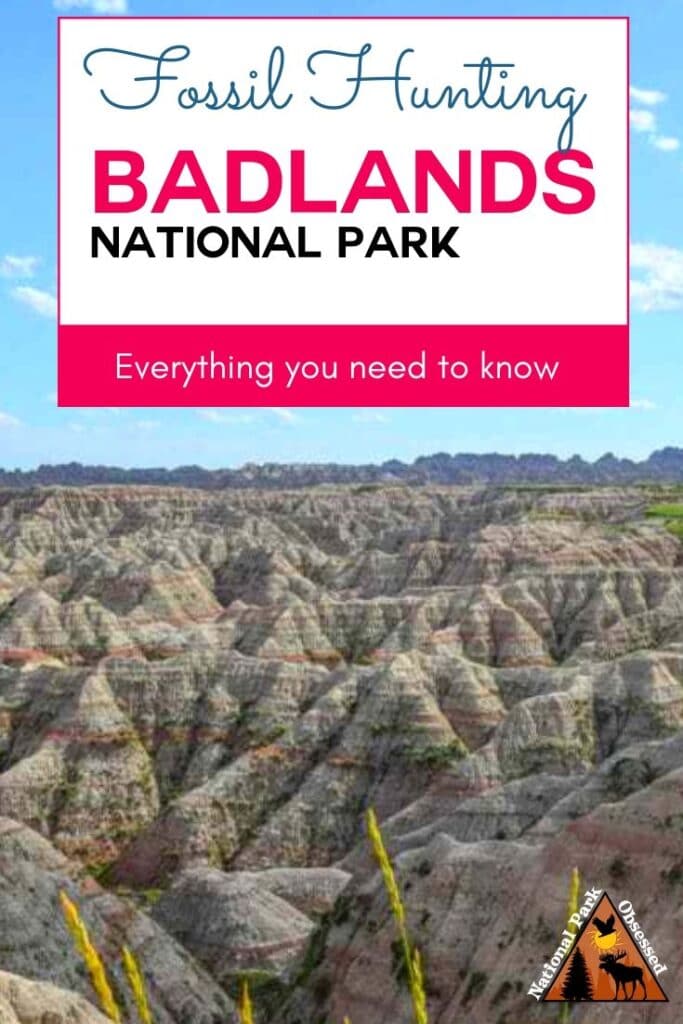 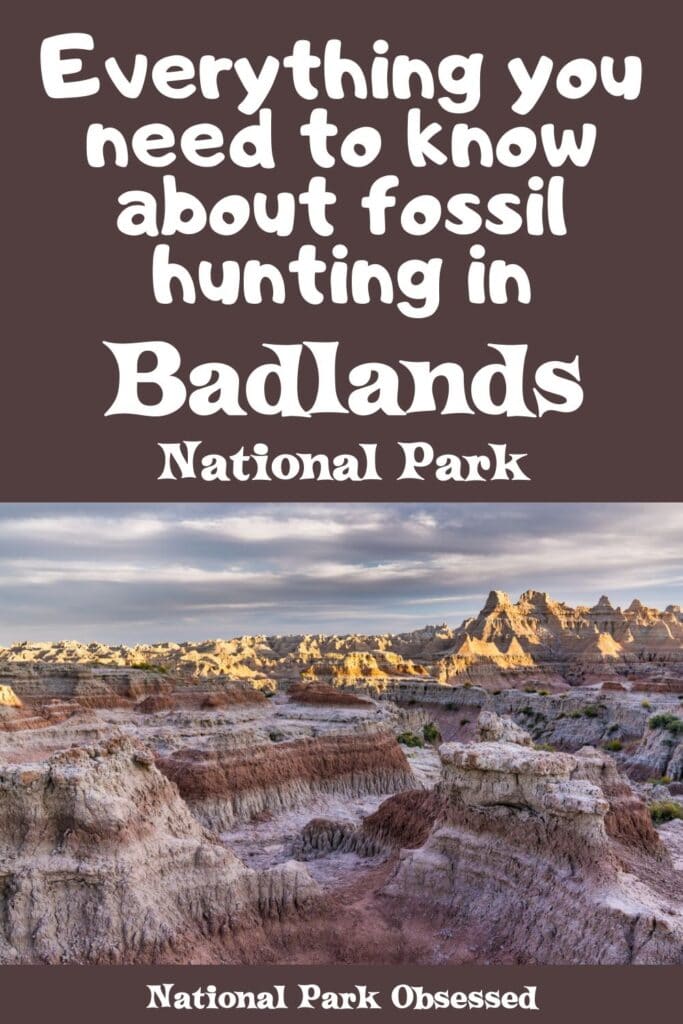 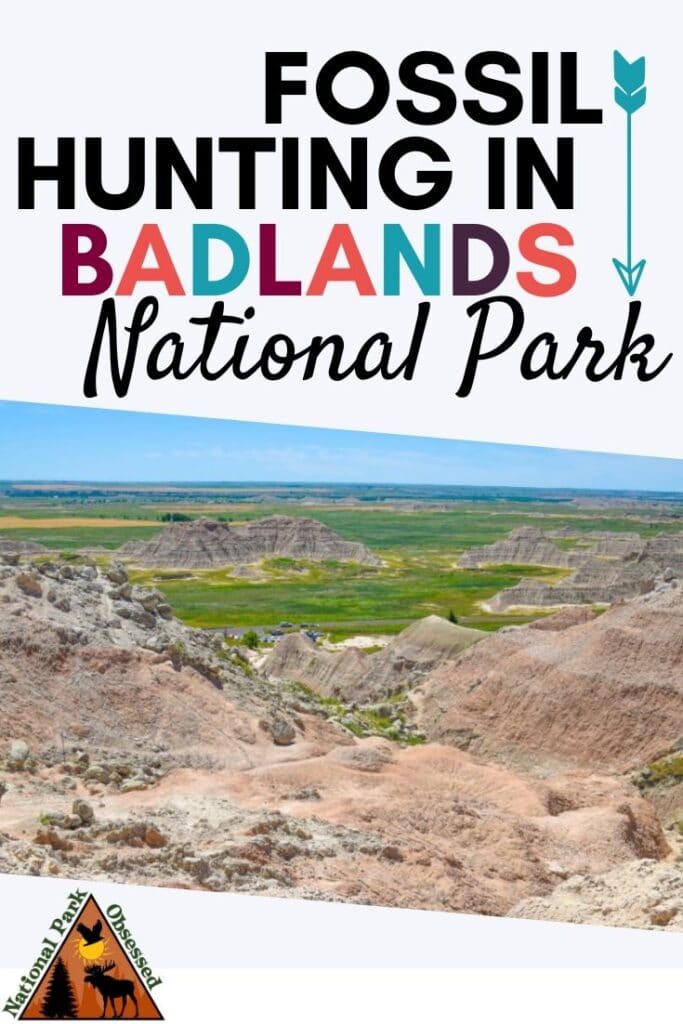 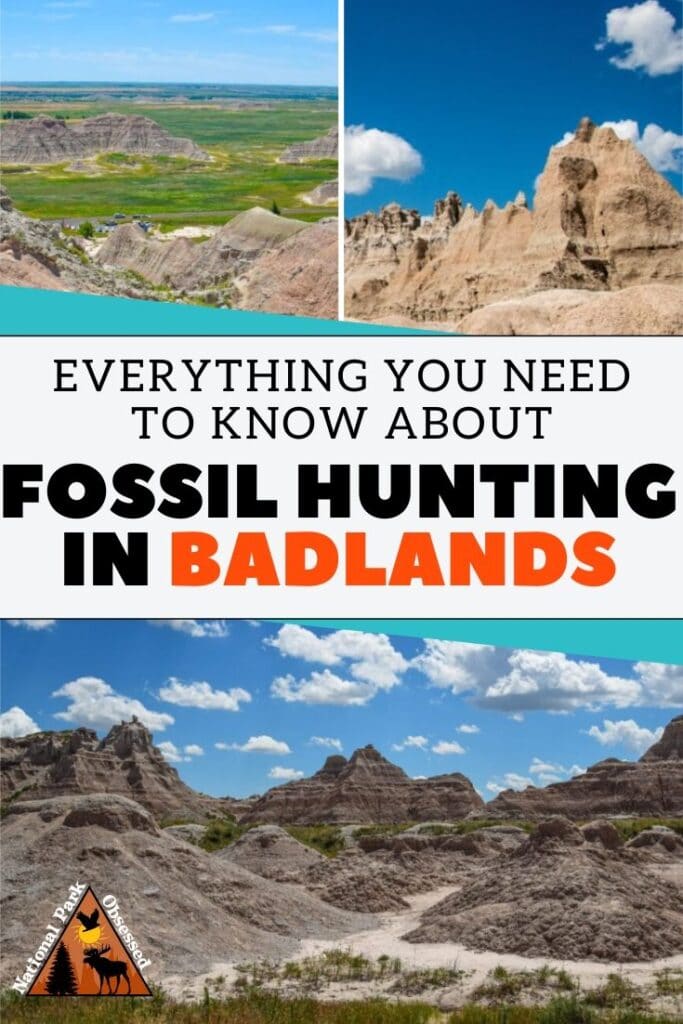 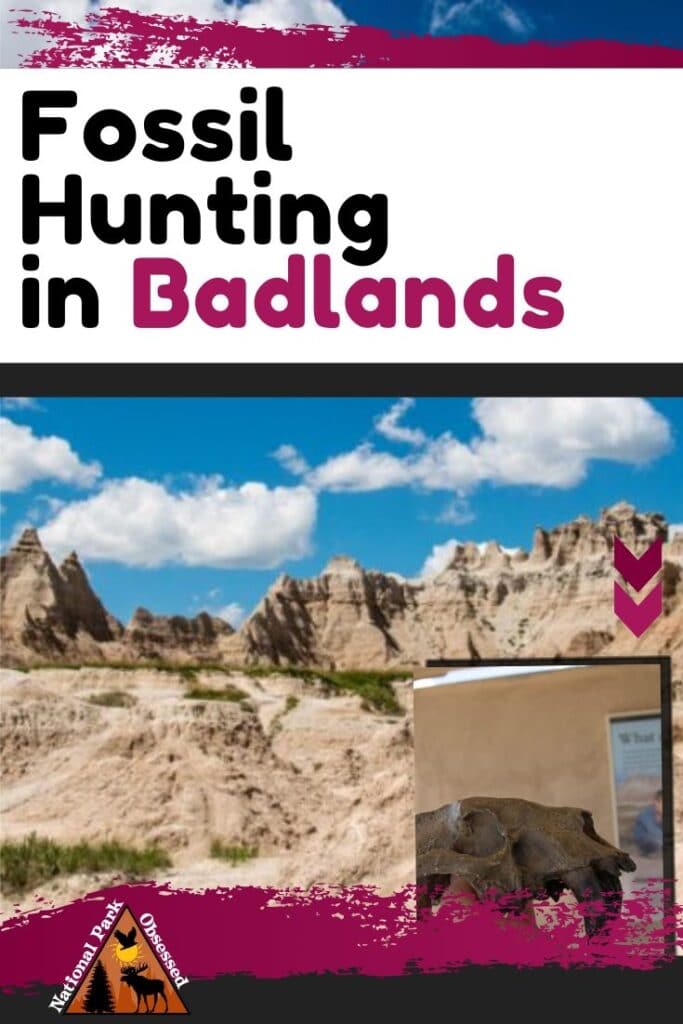 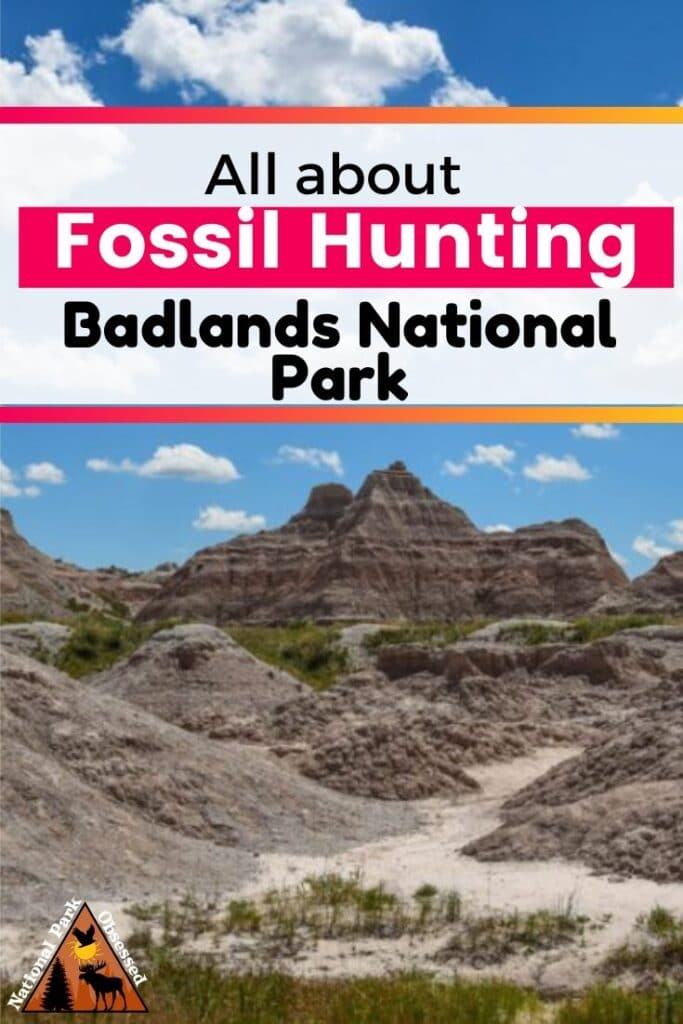 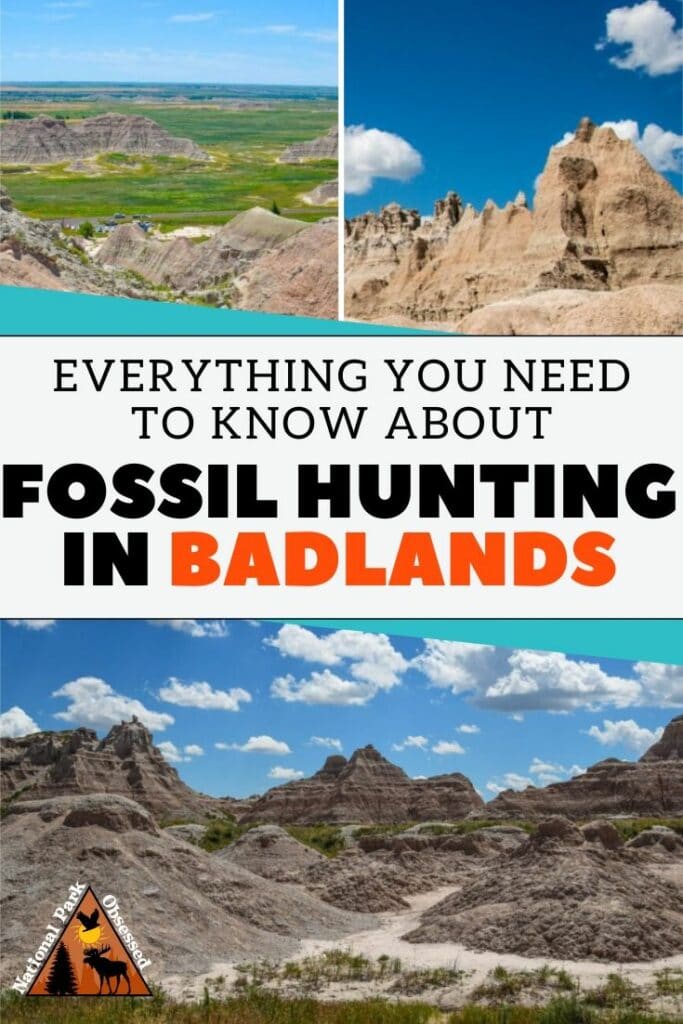 Did you ever dream of being a Paleontologist?  I know I did. Even if someday my job would be replaced by technology that would bring the dinos back to life, then the dinos eat all the humans. No biggie. Dreams die a painful death when you realize most Paleontologists work at a university and might get to dig a couple of months a year (if they are lucky).  Over the years, the United States has been home to thousands of fossil dig sites.  I picked one of the best fossil formations to try my luck at being a paleontologist.  I went fossil hunting in Badlands National Park, South Dakota.

Getting to Badlands National Park?

Badlands National Park is located in southwestern South Dakota.  The park is just west of the famed Dakota Black Hills.  My visit to Badlands NP was part of my South Dakota road trip and was my 31 national park in my quest for all 61.

The closest airport to Badlands is Rapid City Regional Airport. It is located about an hour away from the park entrance. The next closest airport is Casper/Natrona County International Airport (CPR) which is 263 miles west of Badlands. Additional airports are much further away.

South Dakota is well known for its fossil.  The state is the home of the most complete and largest T-Rex fossil ever found. Her name is Sue.  She can be seen at the Chicago Field Museum.   Finds like this are rare and the exception rather than the rule in fossil discovery.

Public fossil hunting is allowed in South Dakota. Keep your eyes peeled, it is possible to find fossils just lying on the ground or on an exposed rock face.  That being said, if it’s on public land it either belongs to the state of South Dakota or the United States. Unless you have permission from the landowner, staging your own dinosaur fossil dig isn’t allowed.  It is disappointing you can’t have your own South Dakota Fossil dig, but that is life.

Badlands National Park protects an exposed area of geological formations.  Each layer represents an era of history.  The Badlands started as an inland sea that over millions of years transitions to a swampy floodplain.  As more time passed, the land transitioned into a forest and then into the barren landscape that is eroded by wind, water, and ice.

Most of the badland fossils come from the swampy floodplain era. This layer is greyish and is called the Chadron Formation.  Most of the deposits are between 34 and 37 million years old.

The entire park is a fossil site that is open to the public.  As mentioned earlier, it is one of the best places to discover fossils.  You can’t just bring a shovel and dig.  You have to let the wind and water reveal the fossils.

There is a team of Paleontologists who dig up fossils, but most fossils are found by you and me.  Park visitors especially those under the age of 10 seem to find most the fossils.  Badlands has several hiking trails but park guests are encouraged to hike anywhere.  Ask any park ranger and the stories of discoveries abound.  Kids are the ones who are scrambling up and down the buttes.  Their exploration is why they are the ones to discover the fossils.

If you find a fossil, take a picture of it.  Note the location.  If you can get a GPS location, that is amazing.  But get as much info as you can.

To aid with the investigation, preservation, and recovery of the fossils, Badlands has a form for visitors to fill out should they find a fossil. I am not joking there really a form.  Park Service will send a paleontologist out to investigate all fossil reports.  If you are really lucky, you might make an epic discovery.

It happed to Kylie Ferguson. She was visiting the park with her family and while completing her Junior Ranger program found a few bones outside Ben Reifel Visitor Center.  She reported them to park staff.  As the find was near the visitor center, park staff left the fossil in place and allowed erosion to expose the rest of the find.  The park expected to find a sheep-like animal but what they got was an almost perfect sabretooth cat skull.  The skill also proved that the cats were cannibals.

Kylie got a 3D printed copy of the skull and a second trip back to Badlands.

Another story involved a park visitor finding a backbone near one of the picnic area.  He left the park without reporting it and then decided it was important to report.  He returned and when Rangers went to examine the find they found more fossil and started digging.  What started as four-day dig turned into a massive multi-year paleontologists dig.

Fossil discoveries in Badlands vary.  Most visitors find a small piece of bone or maybe some teeth.  Those small pieces can lead to bigger finds.  Until you explore the badlands, you don’t know what you could find. Who knows?

The majority of found fossils in Badlands National Park are not from the dinosaurs. The dinosaurs walked the earth between 243 and 233.23 million years ago. The fossils found in Badlands tend to range from 34 and 37 million years old. Commonly found fossils include parts of ancient alligators, Dinictis (saber-tooth cat), ancient camels, ancient rhinoceros, larger rodents, and small rodents.

Best Time of Year for a Fossil Hunting Vacation?

If you are looking to find fossils the best time to search is right after a rainstorm.  Fossils tend to stand out while the ground is wet after a rainstorm.  The three highest months of precipitation is May, June, and July.  Even then rainstorms are not an everyday occurrence. June is the wettest month and it only gets 3.12 inches of rain on average.

I got up for my first full day in Badlands National Park.  I was looking forward to going to fossil hunting in the South Dakota Badlands.  I was planning on a 10-mile hike along the Castle Trail from the Door and Window Trail parking lot to Fossil Exhibit Trail parking lot.

The first mile or two of my hike was through the mixed grassland.  A short uphill hike led me to Saddle Pass.  This is the start of the badlands.  I took a short break here and explore the rocks.  I was looking for two things.  One I was seeing if I could discover any fossils. The second was to see if I could locate a rattlesnake that had been hanging around in the area.  I wanted to take his portrait.  He decided not to grace me with his presence.  Most likely he was still out on his morning hunt.  No luck on finding any fossils but I was hoping it would rain before the end of my hike.

After heading down from the pass, I was surrounded by the badlands.  I was solo hiking so I wasn’t willing to head super far off the marked trail.  I kept the trail insight or just over the top of one dunes.    It was hard work hiking up and down the dunes looking for little pieces of bone that look like rocks.  I probably doubled my hiking distance.

I loved seeing all the geological layers.  Hiking in badlands lets you get up and close to each layer.  Each color is a look into the past.  It is a time capsule waiting to reveal its secret.  The rain and wind work in tandem to help reveal their secrets.

As I Fossil Exhibit Trail parking lot, I noticed two male Bighorn Sheep about 300 yards from me.  I quickly swapped to my 75-300 mm lens.  I checked where the wind was coming from and slowly and deliberately moved to get a better angle for photographs.  I kept an eye on the Bighorn’s body language as I moved.  They were relaxed until I heard from behind me.

“Look there are some sheep!”

I glance behind me to see where the yelling is coming from.  A kid is running at a full sprint from the parking lot into the badlands.  He sprints past me and sure enough, the sheep turn tail and run.

I just shook my head and headed into the parking lot so I could eat lunch on a picnic table.  As I hike up the short incline.  As I do, the kid’s mother sees me.  The smarts off to me with “Thanks, a lot for scaring those sheep off.”

I really wanted to give her a piece of my mind.  I controlled myself, a bit.  I tell her it’s his fault for running at the animal.  It’s the truth.  Those Bighorns were fine with me.  I was non-threating and their posture was relaxed until the kid showed up.

I finished my hike and arrived at the Fossil Exhibit Parking lot. In my two hours of searching in the badlands, I hadn’t found any fossils.  But I did help remove some litter from the park.  I wish that wasn’t a common occurrence.

During the summer, the park rangers do a program on badland fossils at the Fossil Exhibit Trail.  I stayed for that program.  It was about an hour and the ranger shows fossil and explains the history of the badlands.  You are allowed to touch all the fossils and fossil replicas.  As the program ended, a lightning storm rolled in.  I knew I was in trouble.  Hiking 5 miles in the rain is one thing.  Hiking in an arid landscape with a lightning storm where I am the tallest object is another thing.

I got back to my car as the lighting and rain increased. I was soaked in the short 5 ft walk to my car.  I decided it was nap time and crossed my fingers and hoped the rain would clear for the star viewing program that evening.

I did several more hikes in hoping to find some fossils, alas, my badland fossil hunting expedition was an epic failure.

Have you ever been fossil hunting in Badlands National Park?  Did you find anything?

Ted - there is this book - The White River Badlands: Geology and Paleontology (Life of the Past) by Benton et al. 2015.

My father has a PHD in Geology. Through him, I have always had an interest in Geology and/or fossils. My 9 year old daughter seems to like Geology.

Is there a book that could be recommended on fossil hunting in the Badlands?

I don't know of a book that is specific to fossil of the Badlands. There are some great books on the geology of the parks but those are all general books.