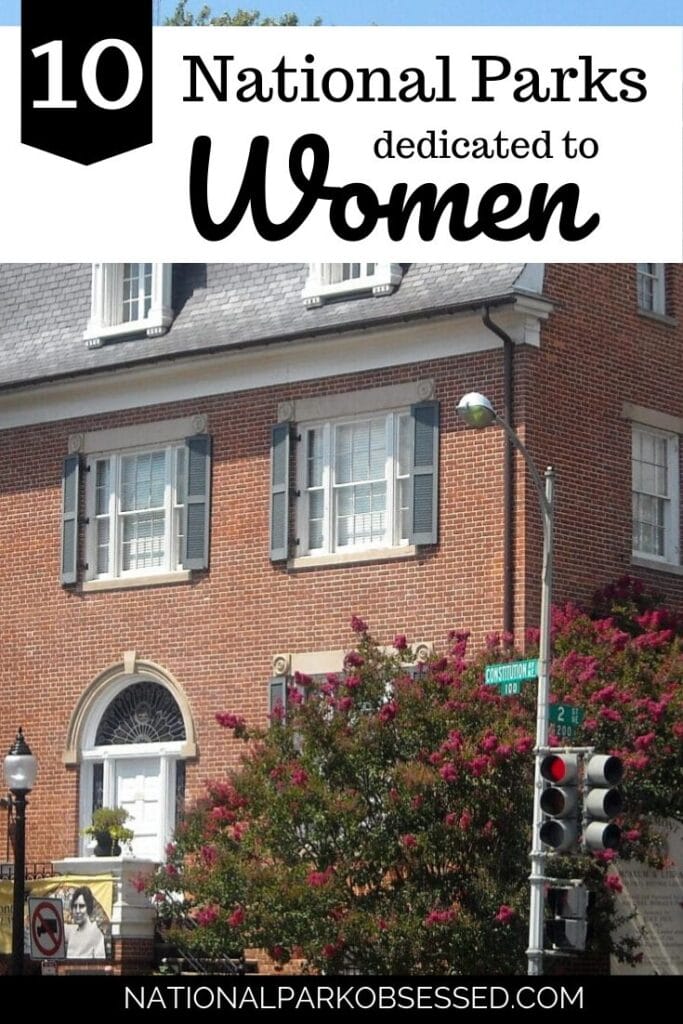 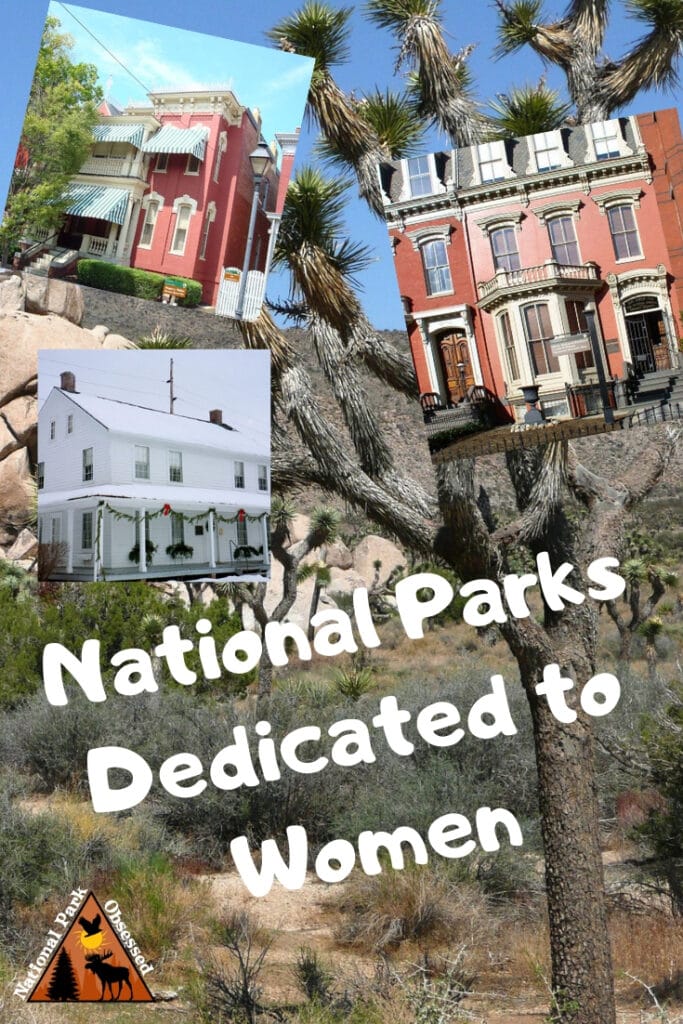 When you think of national parks, one can think of a range of places.  If you are like me, the first ones to jump into mind are spectacular natural wonders.  Yet about half of all National Park Service sites were created specifically to protect the human history of the United States.  Almost every park examines its human history but not all were created to specifically protect its human history.  When you look at the list of sites, a few things jump out.  You will find sites dedicated to forts, military battles, and people. Women have a rich history in the United States.  Their fingerprints can be found through history if you know where to look.  Many of their stories have been lost to a previous time where the role of women was restricted.  There are currently 419 National Park Service sites in the United States, only 10 sites are dedicated to women.

Sites on this list are sites specifically focused on women or dedicated to a specific woman in history.  There are many sites where women played an important role in the site but the site is not dedicated to them.  These can include the Oak Ridge Unit of the Manhattan Project National Historical Park.  Women were in charge of monitoring the enrichment of uranium during World War II. Another site is the Lowell National Historical Park, the workforce of the textile mills was mostly young women.  These are just a few sites where women played a significant role. Also not included on this list are national parks where women spearheaded the movement to protect them. We will be doing a separate list to honor these women.

National Parks Dedicated to the fight for Women’s Rights

Women’s Rights National Historical Park honors the early women rights activists.  Over an afternoon of tea, five women were lamenting their role in society.  Lucretia Mott, Mary Ann M’Clintock, Martha Wright, Elizabeth Cady Stanton, and Jane Hunt decided it was time to hold a convention on women’s rights.  They didn’t delay.  10 days after than afternoon tea, the Seneca Falls Convention was held.  This two-day convention was held on July 19-20, 1848 in Wesleyan Chapel.  This convention created the Declaration of Sentiments and laid the foundation for the fight for women’s rights in the United States.

Women’s Rights National Historical Park is located in Seneca Falls and Waterloo, New York.  The site is made up of four historical sites –  the remains of the Wesleyan Chapel, Elizabeth Cady Station House, M’Clintock House, and the Richard Hunt House.

The house is named in honor of Ava Vanderbilt Belmont and Alice Paul.  Belmont was a wealthy donor who provides the funds to buy and renovate the house.  Alice Paul was the leader of the National Woman’s Party.  She led events such as the Silent Sentinels, for two and half years women protested outside the White House for the right to vote. Paul lived and worked in the house for many years.

The Belmont-Paul Women’s Equality National Monument is located in Washington, DC.  Guided tours are offered Wednesday through Sunday at 9:30 AM, 11:00 AM, 2:00 PM, and 3:30 PM.  The site is closed on Monday and Tuesday.

Harriet Tubman is the only person to have TWO national park service sites dedicated to their life.  Harriet Tubman was born a slave in 1822 in Dorchester County, Maryland.  She was beaten many times as a child.  One of those beating inflicted a serious head injury which would cause dizziness, pain and excessive sleeping throughout her life. At the age of 27, she escaped to Philadelphia. Once there, she started returning to Maryland and helping other slaves escape to the Free States and after 1850 to Canada.    Over 11 years, Tubman helped at least 130 other slaves escape to freedom. She personally led about 70 of them to freedom.

During the Civil War, she served in a range of roles from cook and nurse to armed scout and spy.  She guided the Combahee Ferry Raid and liberated over 700 slaves.  After the war, she joined the women’s suffrage movement until illness forced her retirement.  She died on March 10, 1913, as an American Hero.

Harriet Tubman Underground Railroad National Monument covers 480 acres of land in Cambridge, Windy Hill and Preston, Maryland.  The monument is made up of three main sections.  The Harriet Tubman Byway is an auto trail that follows Tubman’s early life and her work rescuing slaves.  The Harriet Tubman Museum and Education Center is dedicated to her story and further research into her life.  The final site is the Blackwater National Wildlife Refuge.  She often used the area to hide out when rescuing people from slavery.

Harriet Tubman National Historical Park is located in Auburn and Fleming, New York.  The park consists of three main sites – Harriet Tubman Residence, Tubman Home for the Aged, and Thompson Memorial African Methodist Episcopal Zion Church.  Harriet Tubman moved into the Residence in 1859 and lived here for most of her free life. The interior of the home is not currently open to the public.  Tubman created the Tubman Home for the Aged to provide a home for indigent and elderly African-Americans.  She operated the home until her health forced her to become a patient.  The original house was demolished but was rebuilt in 1953.  The Home for the Aged is available for tours from Tuesday to Saturday. The Thompson Memorial African Methodist Episcopal Zion Church was the church she attended and helped her run the Home for the Aged.  The Church is currently undergoing renovation to make it structurally sound.

Maggie L. Walker National Historic Site protects the home of Maggie L. Walker. Maggie Walker was the first woman to serve as president of a bank in the United States. Walker was the daughter of former slaves.  She was educated in the Richmond Public Schools.  She became spent a few years as a teacher before leaving to take care of her family.  As her family grew up, she started devoting her free time to developing a business empire. In 1902, she founded a newspaper and chartered a bank.  She was a very successful businesswoman.  Her bank merged with other Richmond banks and she continued to serve as chairman of the board of directors.  She was an early member of the NAACP and supported African-American education and business interests.

Maggie L. Walker National Historic Site is located in the Jackson Ward neighborhood of Richmond, Virginia.  Tours of the house are offered daily from the visitor center. Her home still has most of Walker’s belonging and furnishings.

Mary McLeod Bethune Council House National Historic Site preserves the legacy of Mary McLeod Bethune.  Bethune was an educator, civil rights activist, and humanitarian.  She was the daughter of former slaves.  She had planned on being a missionary but she found another calling.  She founded a private school for African-American students and helped start the United Negro College Fund.  Her work led to her being appointed to President Franklin D. Roosevelt’s Federal Council of Negro Affairs.  Bethune called this Council the Black Cabinet and they were public policy advisors to the President.  Bethune was the only woman on the council.  She shared the struggles of the African American community and worked to better the lives of African-Americans.  She was the “First Lady of the Struggle.”

Mary McLeod Bethune Council House National Historic Site is located in Washington, DC.  Bethune lived here from 1943 until 1955. The three-story Victorian townhouse was also used as the headquarters for the National Council of Negro Women.  The home is open to the public and is a museum.

Clara Barton National Historic Site interprets the life of Clare Barton.  Barton is best known for founding the American Red Cross.  Barton was an outspoken woman ahead of her time.  She was the first woman to receive equal pay as a clerk for the US Patent Office.  Barton never set-up to be a nurse.  She was in the right place at the wrong moment.

During the early outbreaks of violence in the American Civil War, Barton was looking for a way to serve her country.  She started helping by providing nursing care to wounded men.  She started collecting medical and aid supplies.  She worked to collect and distribute the supplies.  She learned all her nursing skills in the field after battles such as Second Bull Run and Antietam.

After the war, she went to Europe and worked with the Red Cross society during the Franco-Prussian war.  After she returned to the United States, she worked to sound the American Red Cross.  She gained support by arguing that the organization would do more than just respond to wars.  It would provide assistance in natural disasters as well.

The Clara Barton National Historic Site consisted of Barton’s Glen Echo home.  This resident was the early headquarters of the American Red Cross and home of Barton for the last 15 years of her life.  Eleven rooms have been restored to the original design.

Rosie the Riveter-World War II Home Front National Historical Park examines the history of the American home front effort during World War II.  The park looks at the role of women and African-Americans during the war.  With most men away at war, women and African-Americans were needed to step up and fill the workforce in ways many never dreamed.  In particular, women were recruited to work in shipyard and factories like never before.  Women built planes, tanks, and ships throughout the war.  Many of these women worked hard and proved their worth.  They did jobs that needed to be done and after the war, many of them refused to go back into the traditional roles.  They led the way to women being accepted in all aspects of the American workforce.

Eleanor Roosevelt National Historic Site commemorates the accomplishments of Eleanor Roosevelt.  Eleanor Roosevelt was the wife of President Franklin D. Roosevelt.  She developed a public life separate from that of her husband and focused on social work and human rights.  She is credited for reshaping the role of the First Lady.  She gave regular press conferences, wrote newspaper columns, gave speeches, and even publicly disagreed with her husband’s political policies.  Eleanor Roosevelt never gave up her fight for human rights.  She was the first US Delegate to the United Nations General Assembly.  She was the first Chair of the United Nations Commission on Human Rights and helped develop the Universal Declaration of Human Rights.  She served as PresidentJohn F. Kennedy’s Chair of the Presidental Commission on the Status of Women.

Eleanor Roosevelt National Historic Site protects 181 acres of land in Hyde Park, New York.  This land was once part of the Roosevelt family estate.  Eleanor Roosevelt called this small area of the estate Val-Kill and used it for entertaining family, friends, and political leaders.  The site preserves and interperts her amazing work.

I’ve read a lot of International Women’s Day posts this week and this one is by far the best. What an interesting take?? I learnt so much and one of these sites is just an hour from where I live!