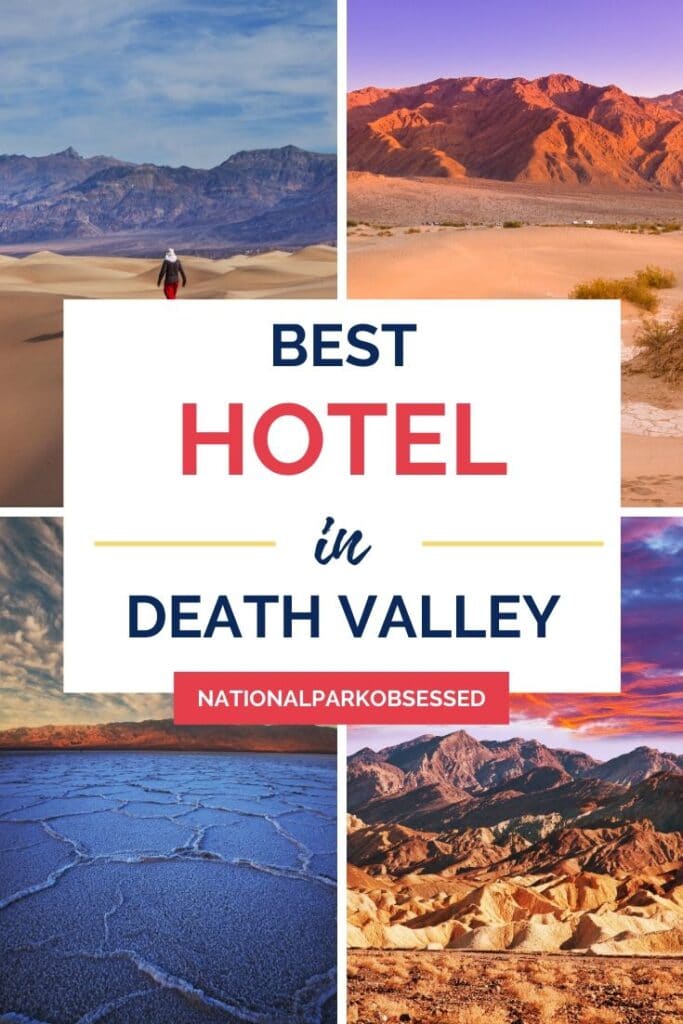 Imagine walking out of your hotel room and having this panoramic view of mountains and sand dunes.  There are a few places in the world were this is possible.  One of those special places happens to be in Death Valley National Park.  Death Valley Stovepipe Wells Village is a small hotel nestled between the Mesquite Flat Sand Dunes and Cottonwood Mountains.  This quaint historic hotel located in the heart of the valley is uniquely placed to showcase some of the best parts of Death Valley.  The area offers scenic views and excellent hiking and showcases some of the best parts of Death Valley.

Stovepipe Wells was founded in 1906 as a stopping point between the mining towns between Rhyolite and Skidoo.  It was one of the few locations in the area miners named “Death Valley” to get water.  This source of water allowed a small traveler rest stop to develop.  It started as a camp with tents that provided food, drink, and lodging developed.  In 1925, entrepreneur Bob Eichmann starting building Stovepipe Wells and a scenic toll road thru the valley.  His development help transition Death Valley from a mining area to tourism hot spot.

Today, Stovepipe Wells Village is still a stopping point for travelers in Death Valley.  The village offers a hotel, campground, gas station, and a restaurant.

Stovepipe Wells Village is located along California Highway 190.  It is a 2.5-hour drive to Las Vegas and about 4 hours from Los Angeles.  There is no official public transportation in or around the park.  However, a bus company called Bundu Bus Company appears to be able to drop you off in the park on their shuttle runs from Las Vegas to Yosemite.  But their website is a little confusing and I get some 400 errors when I tried to scout out the time table.

Please note, if you get dropped off by the Bundu Bus, I would recommend getting a jeep from Farabee’s Rental Jeeps in Furnace Creek so you have transportation around the park.  Check out my review of Farabee’s Jeep Rentals. 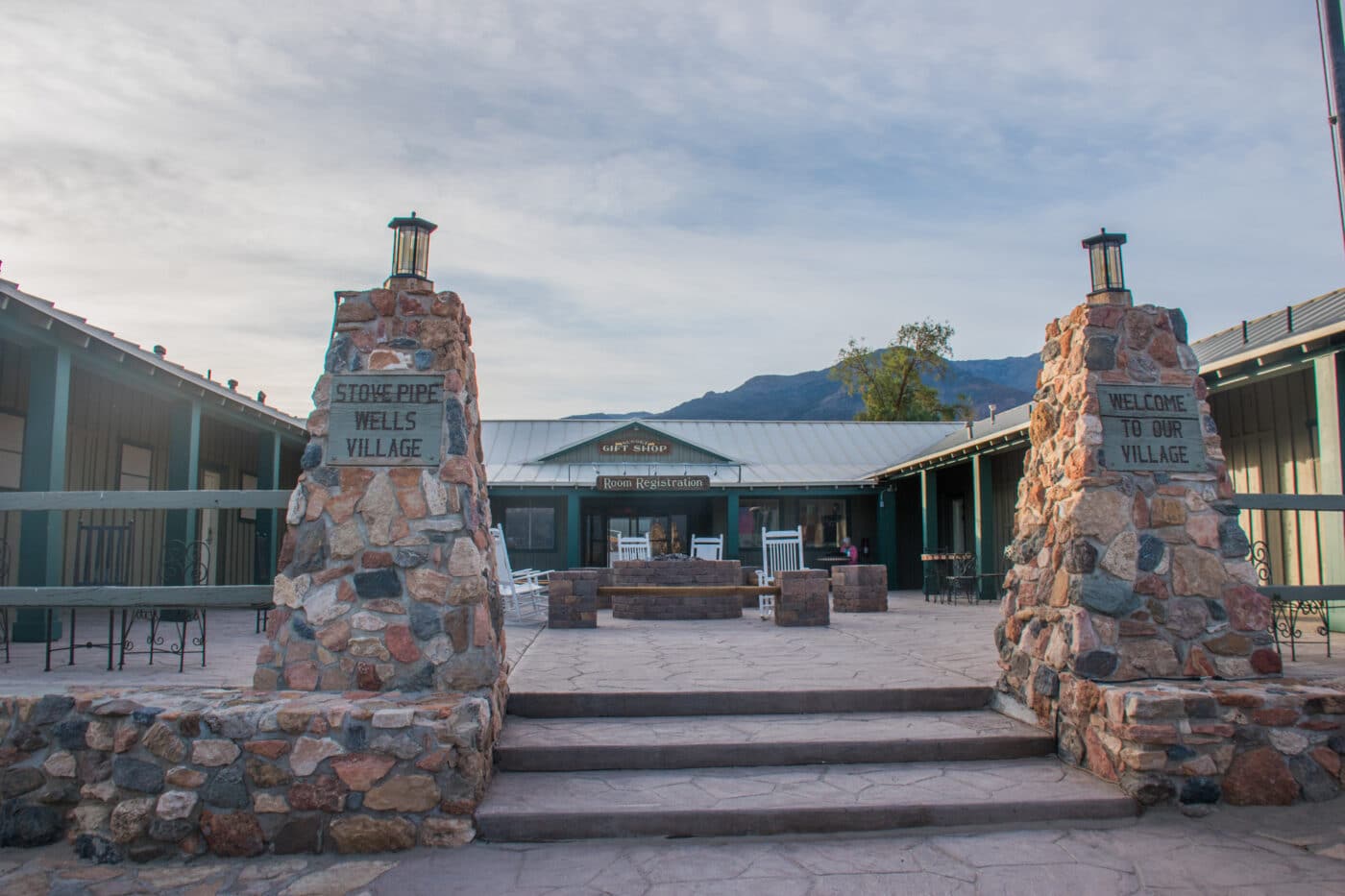 Disclaimer: Thank you to Death Valley Stovepipe Wells Village for hosting my stay. They provided me with two nights of accommodations during my trip to Death Valley National Park.  All opinions are 100% mine.

I spent two nights at the Stovepipe Wells Village in a deluxe room with two queen beds during my trip to Death Valley.  I checked in around 3:30 p.m after day checking out some of the sights in the park.  I was a little tired and ready for a nice hot shower and a night not sleeping in my tent or rental SUV.  Check-in was quick and the front desk staff gave me directions to my room.  With the exception of the patio rooms, all the hotel rooms have parking just outside the rooms. 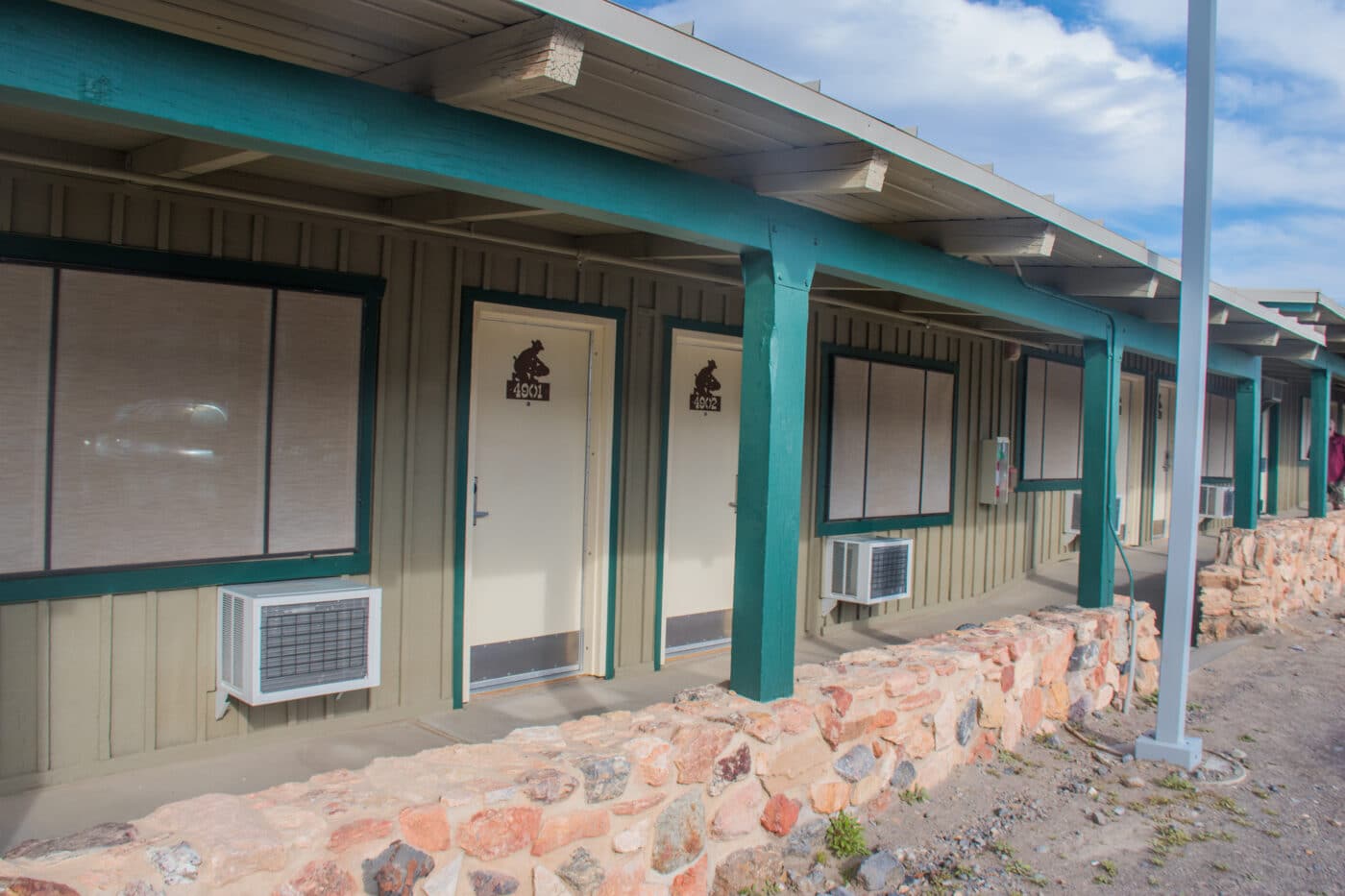 The first thing I noticed when I walked into the room was how bright it was without the lights on.  The windows are outfitted with solar shades.  It lets a soft light in but keeps the harsh glaring light out. This help keep the rooms cool despite the temperature outside.  The room was just a tad on the hot side when I walked in, but it only took a couple of mins for the air conditioner to cool the room down to a comfortable temperature.

The room has a modern look while keeping with the western feel.  It features Native American geometric patterns, photos of Death Valley, and wood furniture. The room comes with a small refrigerator and a coffee maker.  I was so excited when I opened the refrigerator and found a cold bottle of water.  That was such a welcome relief after four days of lukewarm water while camping. 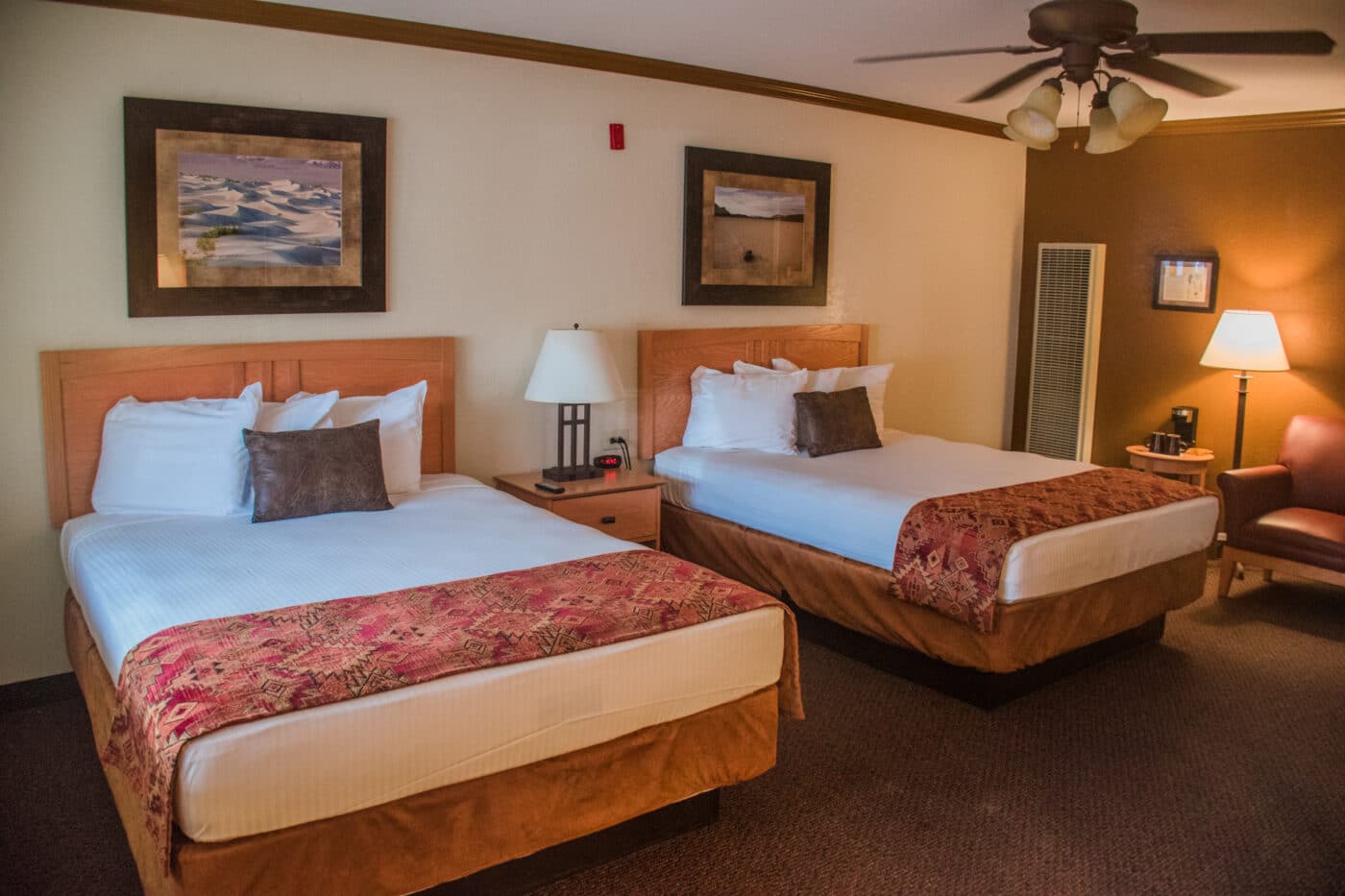 All the wall decorations relate to Death Valley.  While the pictures of the Death Valley highlights were a nice touch, I loved the framed pages of the “Handbook for Desert Survival.”  I learned about how to make solar still to collect atmospheric water. I hope I never have to use that knowelge  The other frames held pages from plant ecology of Death Valley, California. I learned all about phreatophytes plants. 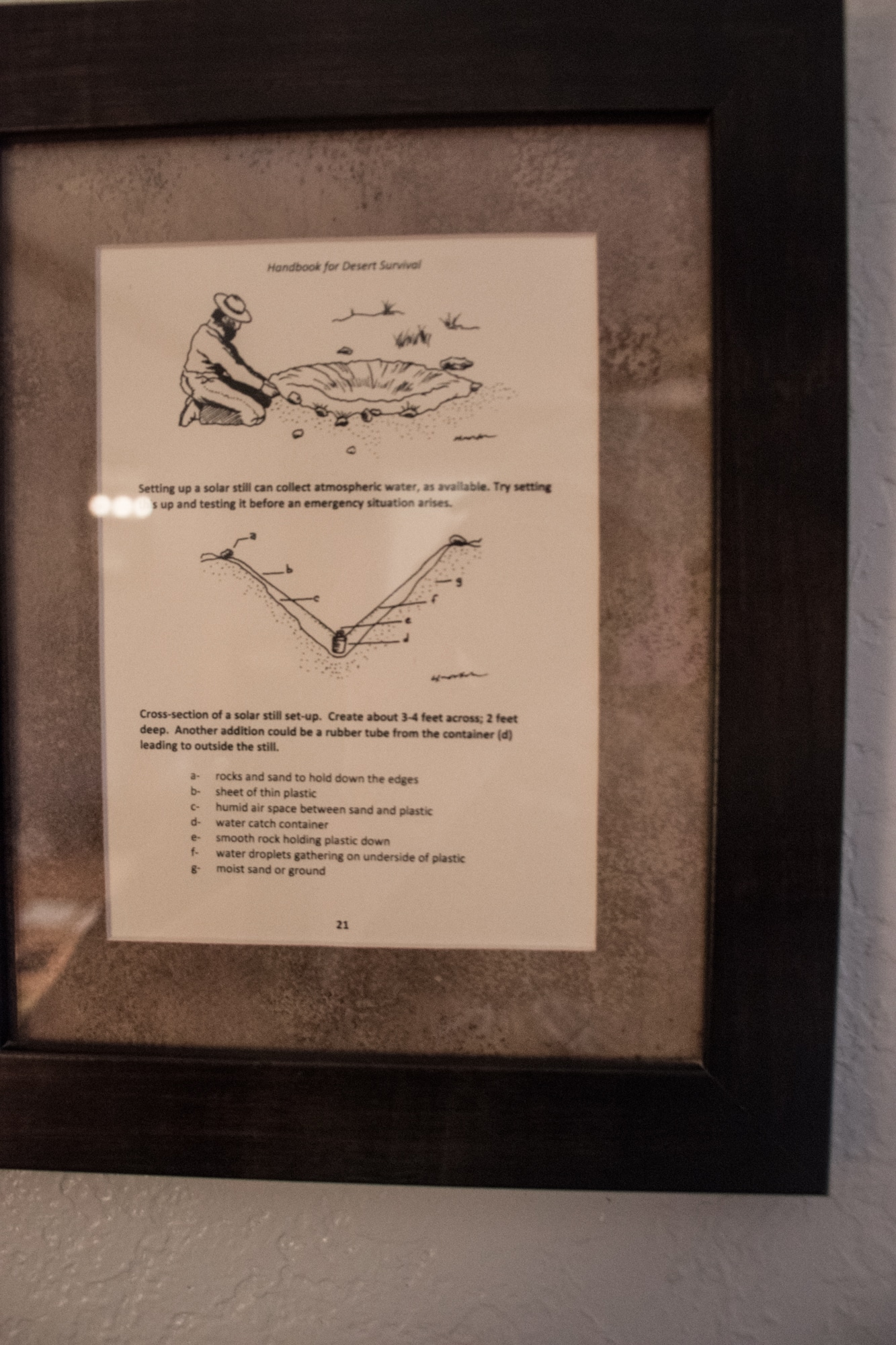 The bathroom was a real treat.  It has an outer sink area comes with a granite counter top and had all the standard amenities. The shower has slate tile and a spacious shower stall.  I loved that Stovepipe Wells uses refillable soap, shampoo, and lotion containers.  It is really nice to see they are trying to reduce plastic waste in the bathrooms of their hotels.  The only thing I will fault is the water took a long time to get warm.  That was disappointing given that they are in an environment where water is an uber precious resource. 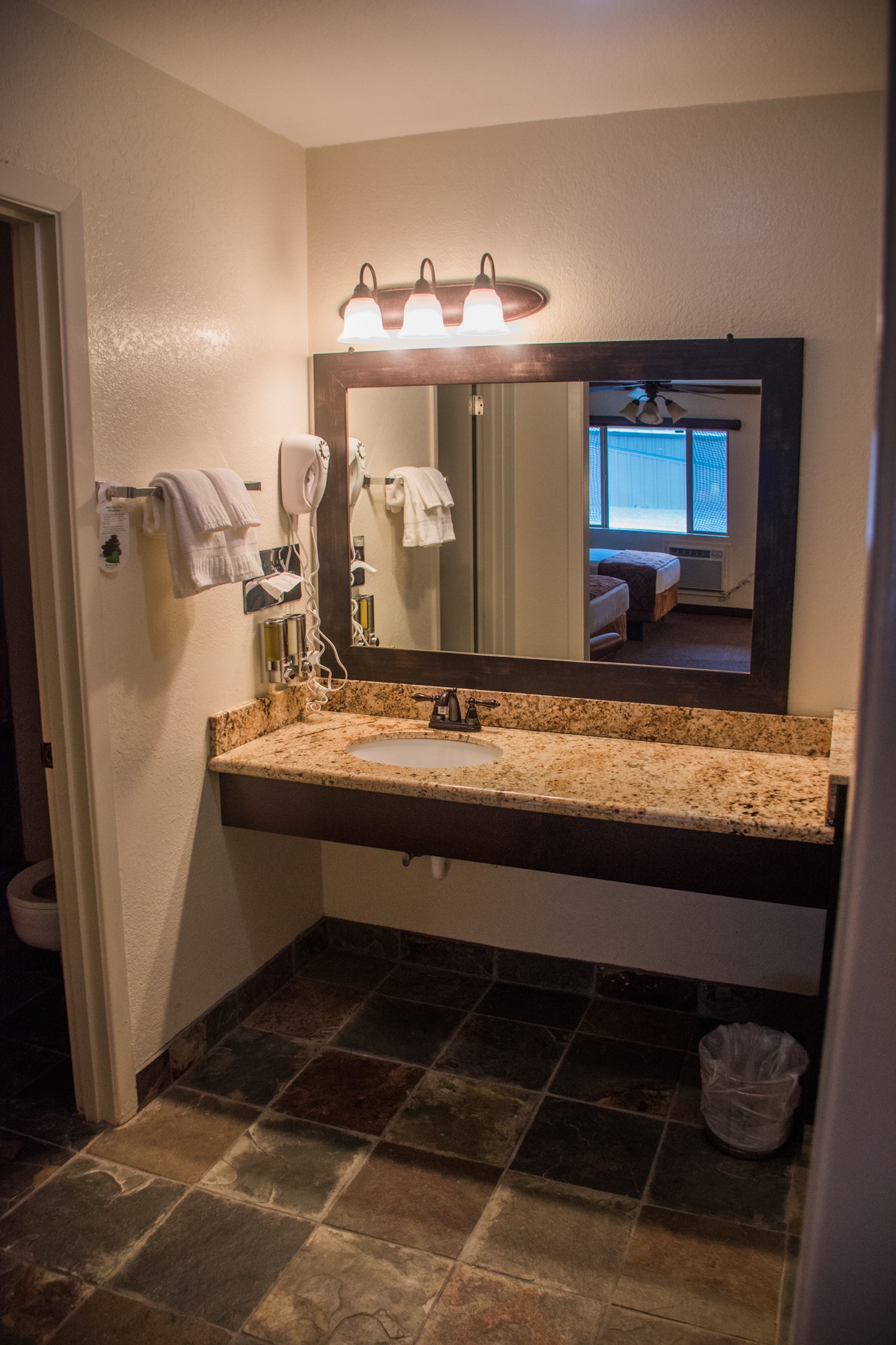 The beds are nice and comfy with crisp white sheets.  I slept like a dream in the beds.  They were a nice change from my sleeping pad. There are extra blankets and pillows on a self in the bathroom outer chamber. 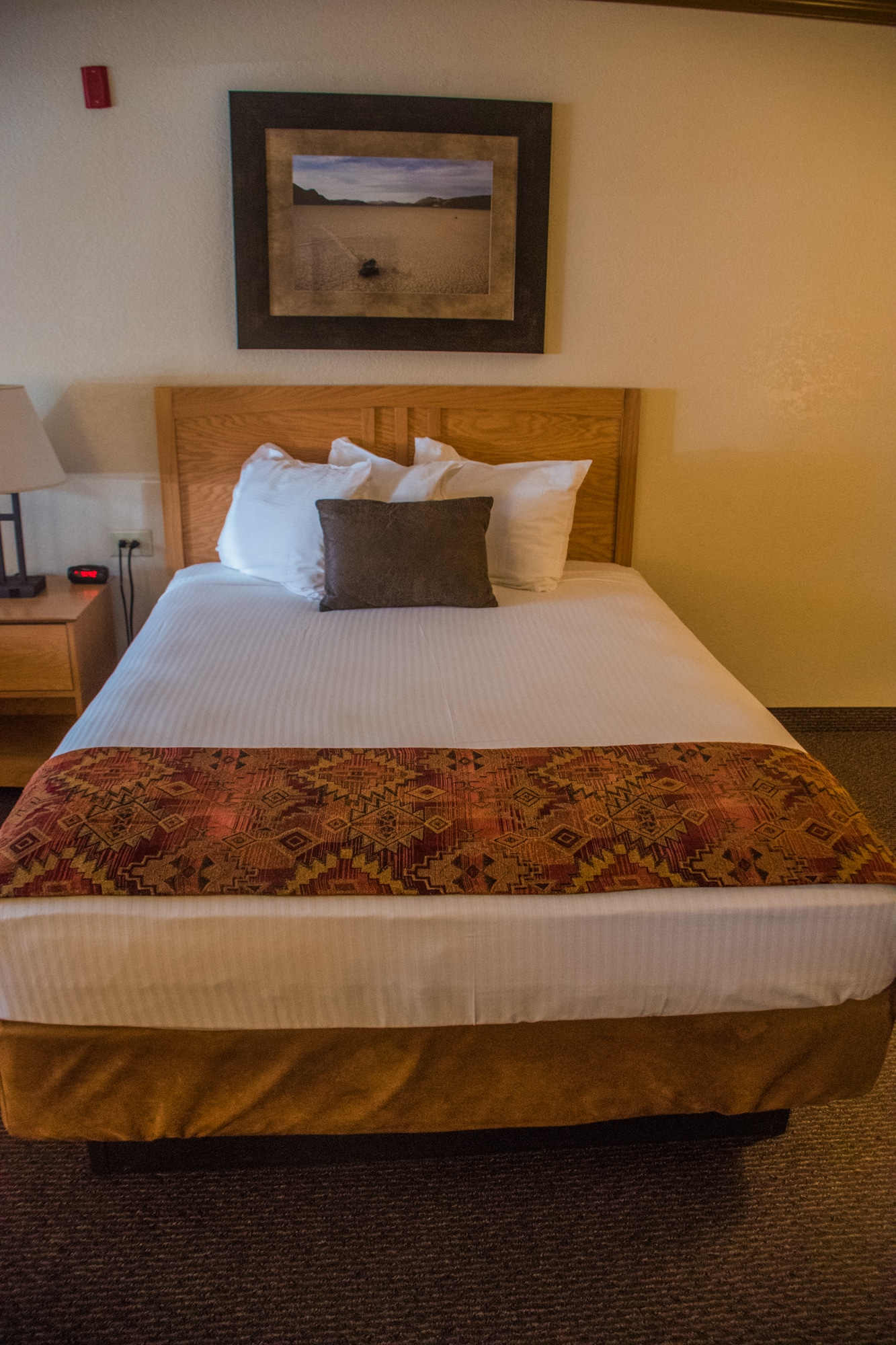 The entire hotel isn’t that large and all the amenities are easy to reach.  The swimming pool is a decent size for the hotel and offers plenty of lounge chairs.  They even have a covered section to get out of the sun while enjoying your afternoon nap. 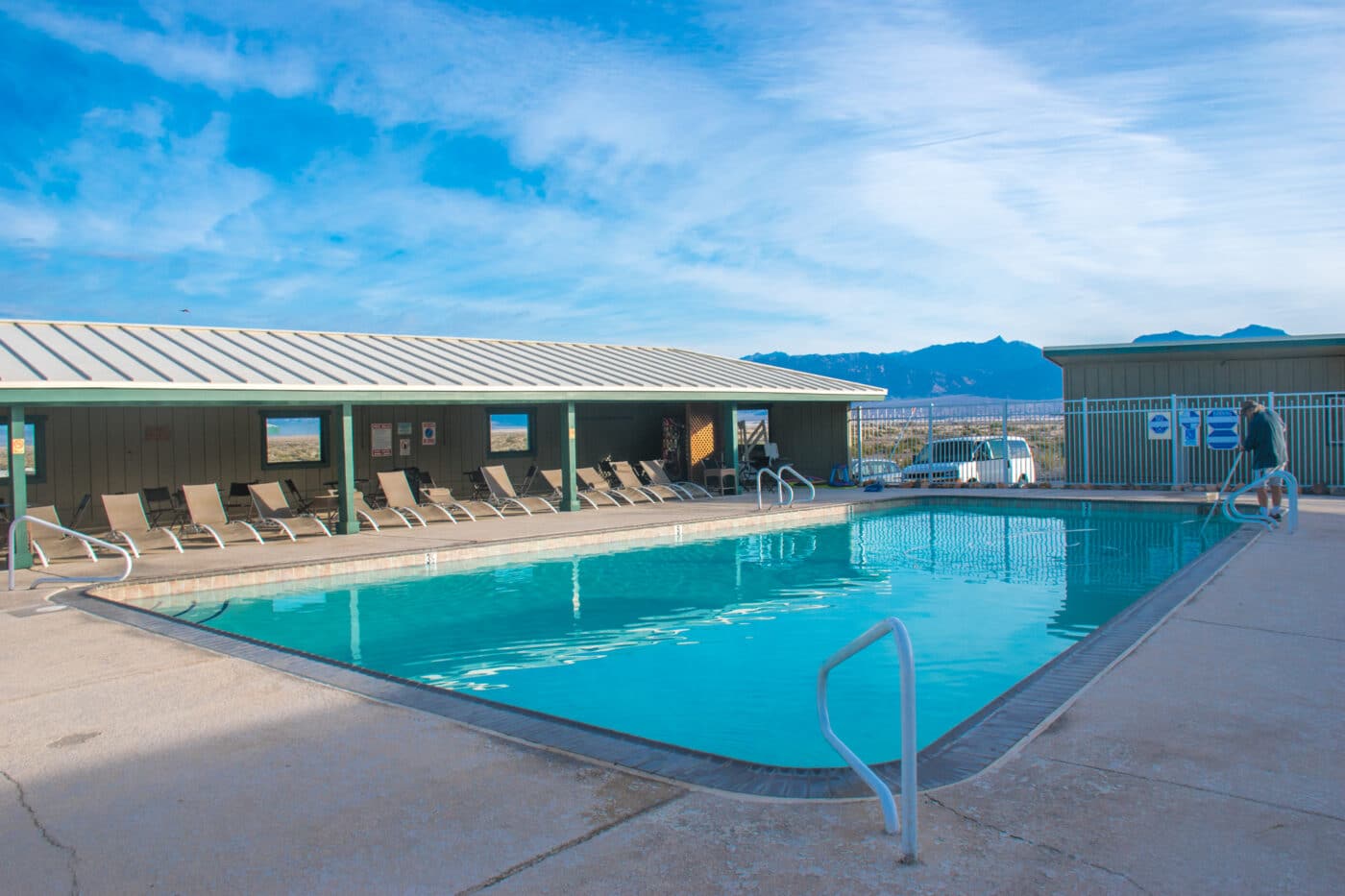 I spent two nights enjoying my room at Stovepipe Well, especially the night the winds kicked up and had a mini sandstorm.

These eight rooms are original to the historic Stovepipe Wells.  The rooms are located around the courtyard and near the banquet hall.  As these rooms are historic, they are smaller than modern hotel rooms.  These rooms are set-up for 2 or 3 people.  Six rooms has a double bed and 2 rooms have a double bed and a twin bed. The rooms have a private bathroom with a shower and include air conditioning, television, small refrigerator, a coffee maker and a workstation desk.

There are 47 deluxe rooms. These rooms come with either a king bed or two queen bed.  Eight rooms have king beds and 39 rooms have a pair of queen beds. These rooms have been recently renovated.  They have granite countertops and amazing stone showers.  The rooms have a private bathroom with a shower and include air conditioning, television, small refrigerator, a coffee maker and a workstation desk.

Twenty of the 2 queen rooms have a view of Mesquite Flat Sand Dunes.

There are 16 standard rooms. These rooms come with either a two double bed or double bed and a twin bed.  Eight rooms have king beds and 39 rooms have a pair of queen beds. These rooms have been recently renovated.  They have granite countertops and amazing stone showers.  The rooms have a private bathroom with a shower and include air conditioning, television, small refrigerator, a coffee maker and a workstation desk.

Twenty of the 2 queen rooms have a view of Mesquite Flat Sand Dunes.

There are 2 ADA rooms. These rooms come 2 full beds and all the amenities of a standard room. 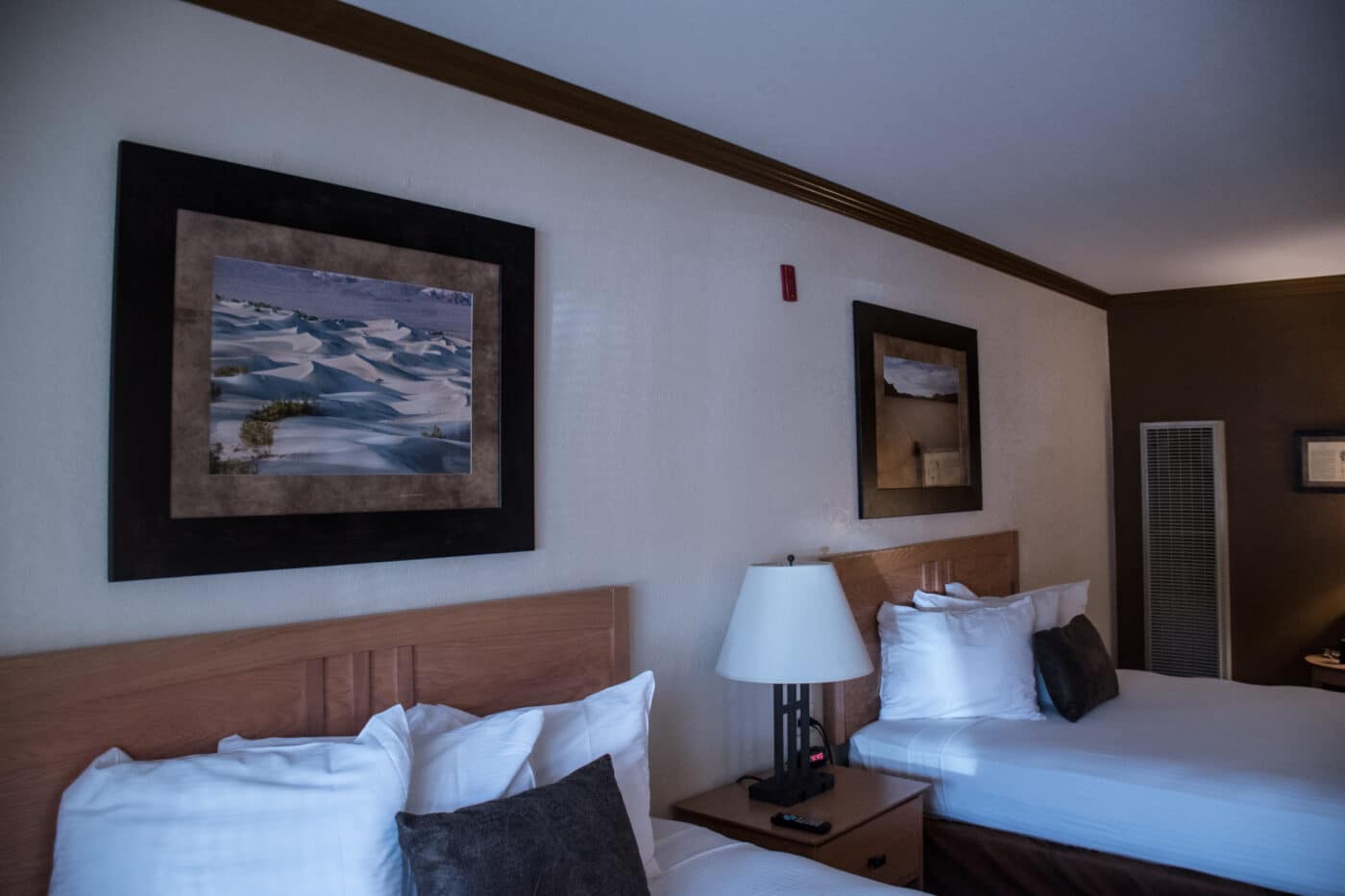 The Badwater Saloon is a throwback to Stovepipe Wells history as a mining town.  They have twenty beers on tap including the Death Valley beer.  There is also a selection of specialty cocktails including ingredients like prickly pear.   This is a good place to grab finger food and lunch.

Toll Road Restaurant is unsurprisingly a western style restaurant.  It serves hearty meals with a western flair.  The menu and restaurant is themed after all the movies that have been filmed in Death Valley.  The restaurant offers breakfast and dinner.  Box lunches can be ordered here.

Overall, Stovepipe Wells is a great place to stay in Death Valley.  It is centrally located and is a great base for exploring the park.  I liked being close to Mesquite Flat Sand Dunes.  I could get up, watch the sunrise then go take a short nap.  I loved the theme. It fit Death Valley without being over the top, I would stay here again in a heartbeat.

I found that Stovepipe Wells was reasonably priced for its location plus the gas here is the cheapest in the park. 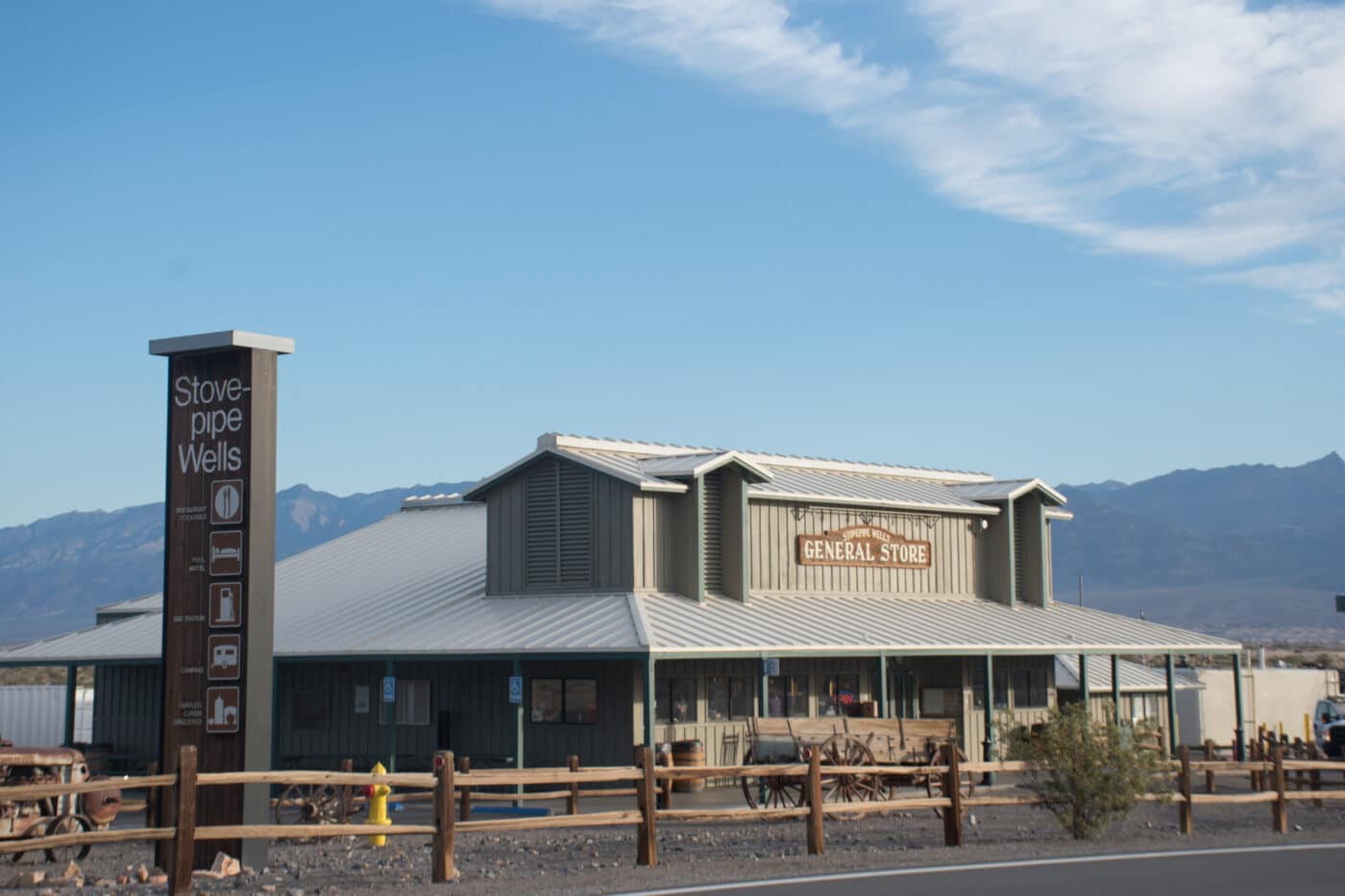 Disclaimer: Thank you to Death Valley Stovepipe Wells Village for hosting my stay. They provided me with two nights of accommodations during my trip to Death Valley National Park.  All opinions are 100% mine.