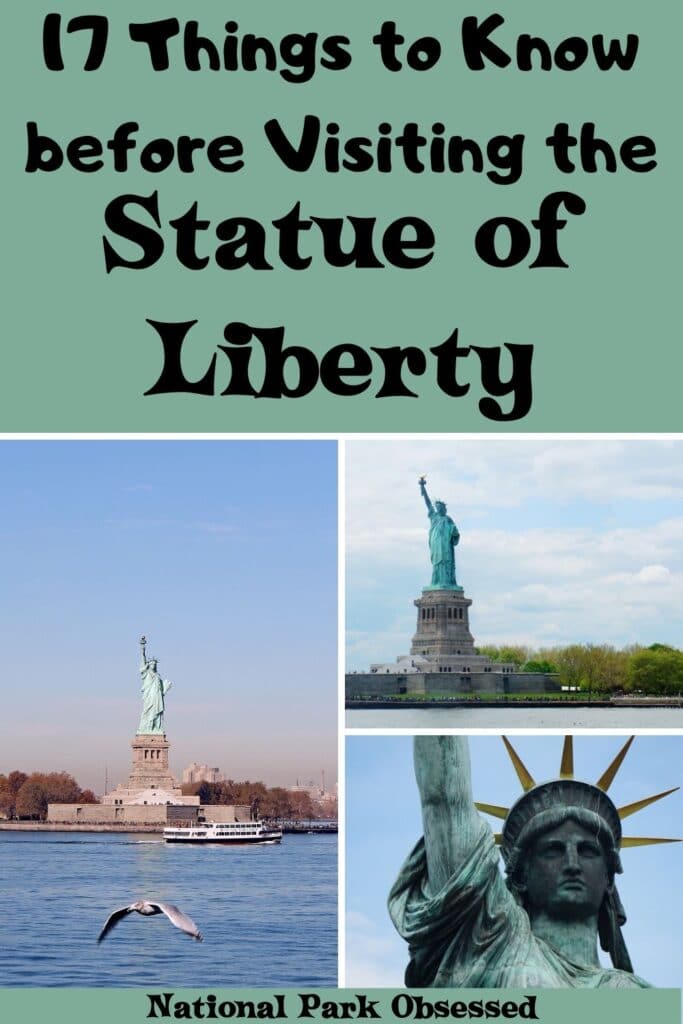 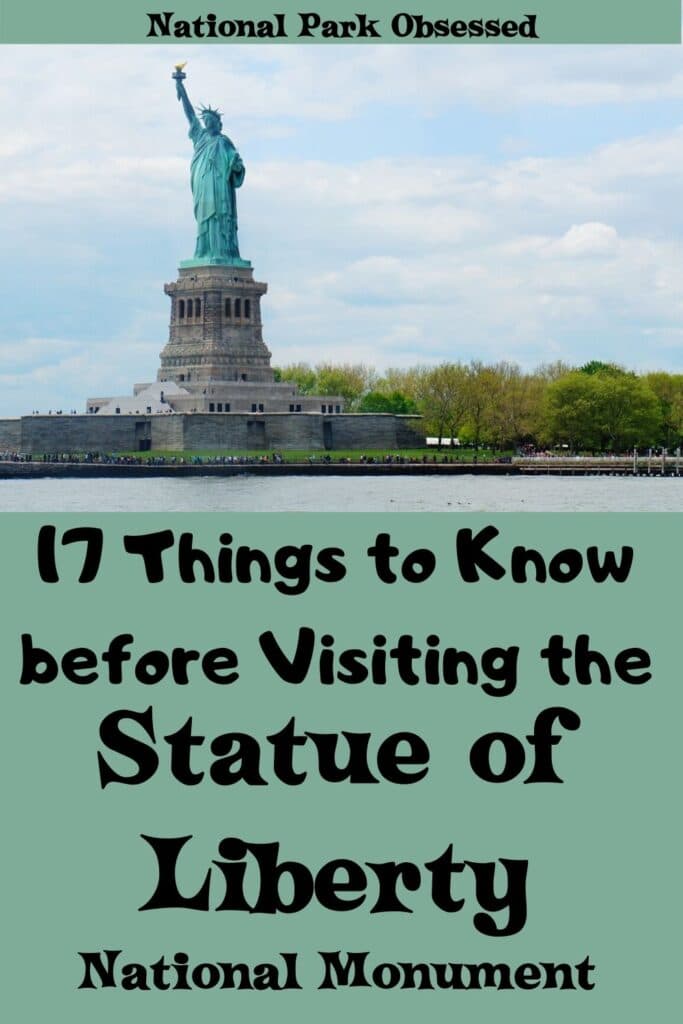 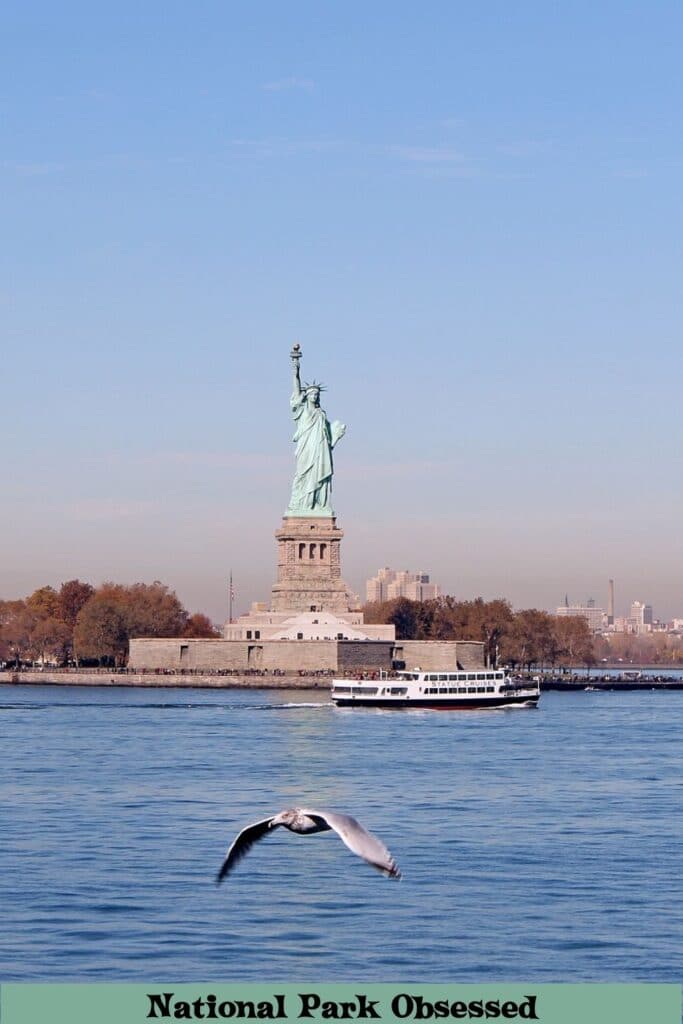 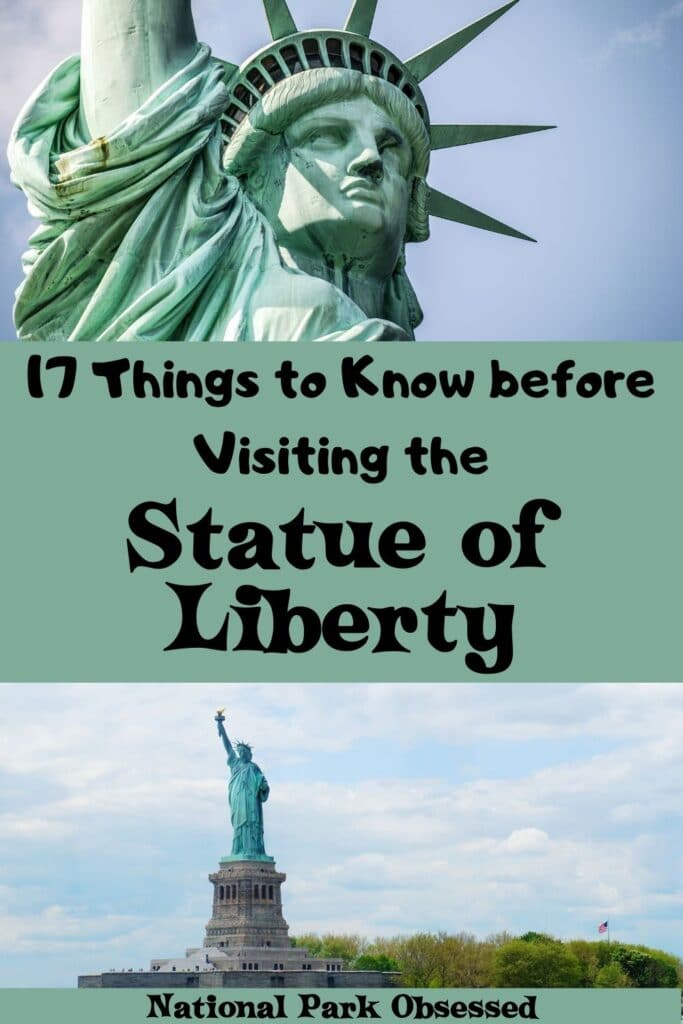 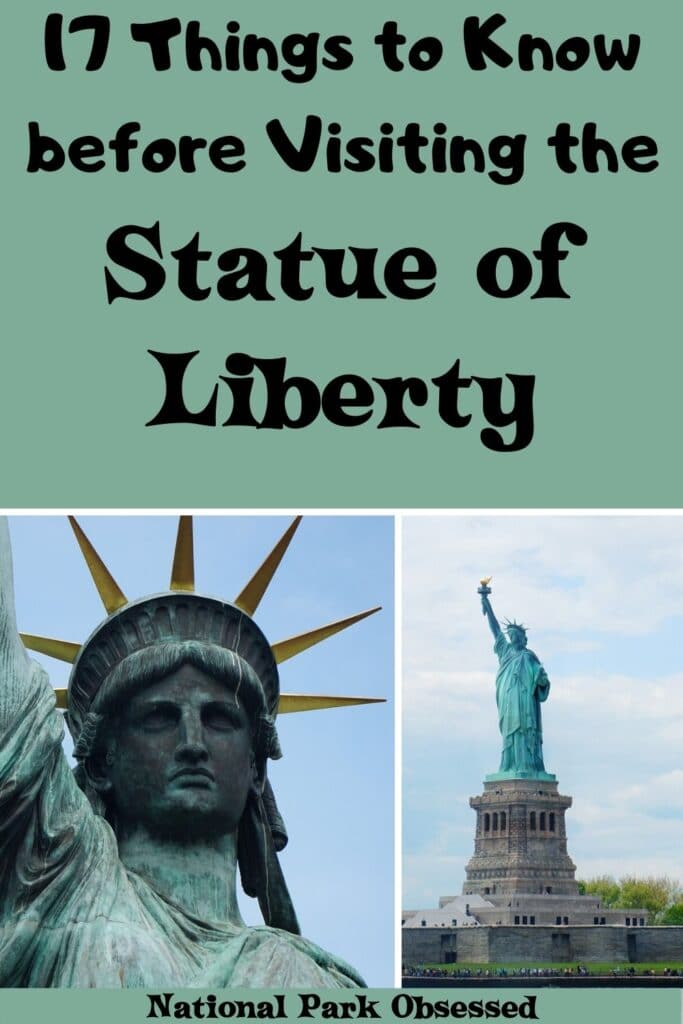 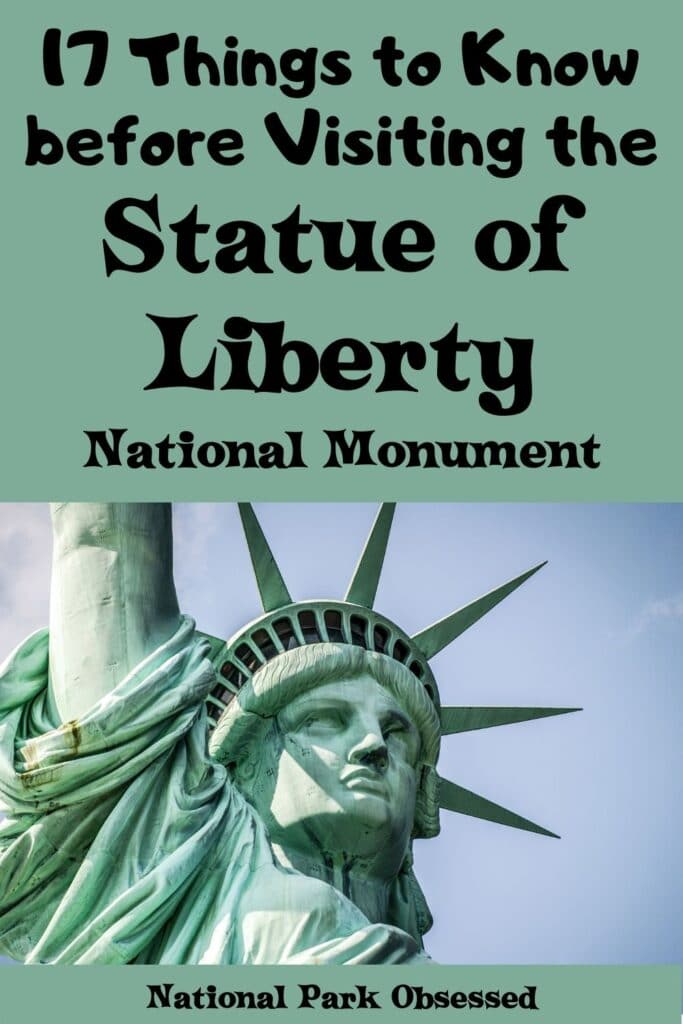 You can visit from New York or New Jersey

The Statue of Liberty National Monument can be visited from either New York or New Jersey. The statue is located on Liberty Island. The only way to access Liberty or Elis Island is via the ferry service offered by Statue Cruises. Private vessels are NOT allowed to dock at Liberty or Elis Islands.

The New York Ferry Service departs from Castle Clinton National Monument (an NPS unit) in Battery Park. Battery Park is at the lower end of Manhattan.

The New York Ferry stops at Liberty Island then Elis Island before returning to New York.

It is recommended that you take public transportation to Battery Park as parking is very limited and very expensive. Battery Park can be reached via subway and bus.

The Jersey Ferry stops at Elis Island then Liberty Island than returns to New Jersey.

Liberty State Park is best reached by driving. Parking is available for a fee. Public transportation is available via the Hudson-Bergen Light Rail BUT the station is a 1-mile walk from the ferry.

National Park Passes are not valid for entrance

Entrance to the Statue of Liberty National Monument and Elis Island is technically FREE. The only way to access the islands is via Statue Cruises which is the official ferry provider.

As Statue Cruises is a concessionaire, the America the Beautiful Pass does NOT cover the ferry ticket, entrance to the Statue of Liberty pedestal or crown, or Elis Island Hospital Tour.

There are different types of tickets

There are four types of tickets to the Statue of Liberty and Elis Island. All the tickets come with access to Liberty and Ellis Island. Due to the popularity of visiting the crown, a maximum of 4 tickets can be purchased in an order. Advanced reservations are recommended for all ticket types.

Get your tickets as far in advance as possible

The Statue of Liberty is a popular tourist attraction for those visiting New York City and the monument has been getting 4 million-plus visitors a year. Statue of Liberty tickets are at a premium and tickets sell out fast.

There are about 10,000 tickets available every day.

It’s quite a climb to the Statue of Liberty Crown

This is a strenuous climb that isn’t for everyone. Here are a few things you need to know about making the climb to the Statue of Liberty Crown.

On July 30, 1916, a munitions depot on the nearby island of Black Tom experienced a series of small fires. At the time the depot was storing some 2,000,000 of small arms and artillery ammunition and 100,000 pounds of TNT. The explosion resulting from the fire caused an earthquake that measured between 5.0 and 5.5 on the Richter scale and the detonation wave broke windows upwards of 25 miles away and knocked fireman off their feet. Fragments from the explosion travel long distance and some were lodged in the Statue of Liberty causing the structural damage that closed the torch. It was determined that German agents had set the fires.

This act of German sabotage was designed to stop the US from selling arms and munitions to Germany’s enemies. In the end, the Black Tom explosion help shift public opinion against Germany eventually led the US’s entry to World War I.

There is a lot to explore when visiting the Statue of Liberty National Monument. Visitors should plan on spending five to six hours between touring Liberty and Ellis Island,

We highly recommend booking your ticket for as early in the morning as possible so you can maximize your visit.

It is open every day but Thanksgiving and Christmas

Liberty Island is open every day of the year but Thanksgiving and Christmas. Access to Liberty Island may also be impacted as a result of inclement weather.

Be prepared for airport-style security

Security at Statue of Liberty National Monument is tight. Basically, be prepared for airport-style security before boarding the ferry to Liberty Island and a secondary screening before entering the Statue of Liberty Museum and Pedestal. A reserve ticket allows you priority entry into the boarding queue.

The following items are not allowed on the ferry. There are no storage lockers available at either screening location in Liberty State Park or Battery Park.

Only the following items are permitted inside the Statue of Liberty Pedestal or Crown.

Lockers are available at secondary screening locations for .25 cents. A change machine is also available that accepts $1 and $5 bills. The following common (but not limited to) items must be secured in a locker: keys, writing instruments, purses, large umbrellas, camera cases, backpacks, shopping bags, any food and drinks, and any item that may impede progress on the staircase.

The Statue of Liberty was a gift from France

The monument was proposed by Frenchman Edouard de Laboulaye in 1865. A decided later, sculptor Frederic Auguste Bartholdi was commissioned to design a sculpture to commemorate the centennial of the American Declaration of Independence and was named “Liberty Enlightening the World.”

As Bartholdi designed this massive colossal copper sculpture, he realized he needs an engineer to address the structural issues. He commissioned Eiffel Tower designer Alexandre Gustave Eiffel to design the internal support framework. The Statue was finished in July 1884 and shipped to the US in 214 crates. The boxes arrived in New York in June 1885, but assembly wouldn’t start until the spring of 1886.

The Statue’s Pedestal was funded by a viral marketing campaign

Raising the funds to build the Statue’s Pedestal wasn’t an easy task. Funding efforts began with the auction of art and manuscripts such as poet Emma Lazarus’s poem “The New Colossus” including the iconic lines: “Give me your tired, your poor/Your huddled masses yearning to breathe free.”

These early efforts didn’t raise enough money to fully fund the project. In a blow to the project, both Congress or New York Governor blocked funding bills. Both Boston and Philadelphia offered to fund the statue as long as the statue was built in their city.

Joseph Pulitzer didn’t want the statue relocated. Pulitzer used his newspaper, The New York World, to launch a fundraising campaign to raise the need $100,000. He pledged to print the name of every contributor in his newspaper. The campaign was a MASSIVE success. It only took six months to raise the money. Donations poured in from across the United States. In the end, over 125,000 people donated to the fundraiser from across the US. Donations ranged from five cents donated by a poor office boy to $15 from a rival city’s home for alcoholics.

The Statue of Liberty spent the first few decades of changing color. The Statue was a shinny brown copper color when it arrived from France. As the decade passed the copper underwent a chemical reaction and formed a layer of mineral cuprite which as a dull pinkish-red hue. This reaction was caused by a combination of air pollution and oxidation. Further chemical reactions changed the mineral cuprite into tenorite which is black in color.

In 1900, the tenorite had further oxidized and reacted with the sulfuric acid in the air and started to become a blue-green. By 1906, the entire Statue had developed this blue-green patina. This iconic blue-green patina is the final stage of these chemical reactions and hasn’t changed in more than a century.

You can see the original torch

Even with the torch replacement and renovations, the public is still unable to access the torch. The original torch has been placed in the Statue of Liberty Museum. Visitors can walk around the torch and enjoy the history.

Elis Island is included in your Statue of Liberty ticket

Many Americans can trace their family history to Ellis Island

Elis Island was in operation for 62 years. During that time, 12 million immigrants passed through the island. It is estimated that 40% of Americans can trace their ancestry back to Elis Island. The island was the site of the first Federal immigration system.

Visitors to Ellis Island can search and trace their family history at the American Family Immigration History Center.

There are additional National Park Sites nearby

The Statue of Liberty National Monument is not the only National Park Service Site in the New York/New Jersey area. If you are planning on renting a car or using public transportation, these sites are only minutes away.

The Lower Manhattan area is home to multiple sites including:

Other nearby parks include:

Get help planning your trip to Statue of Liberty National Monument