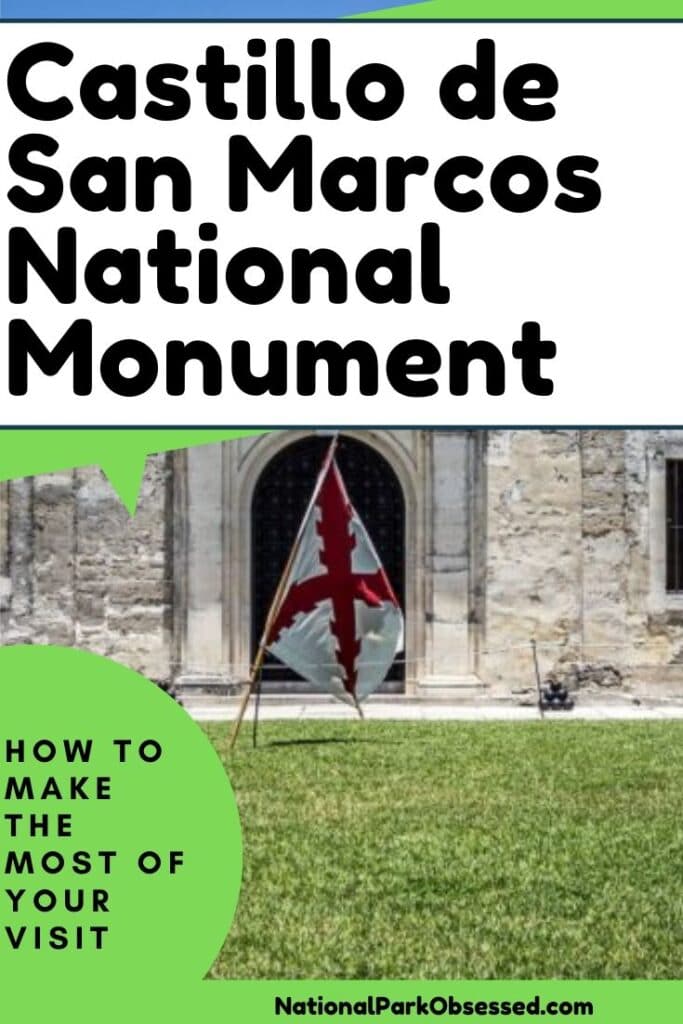 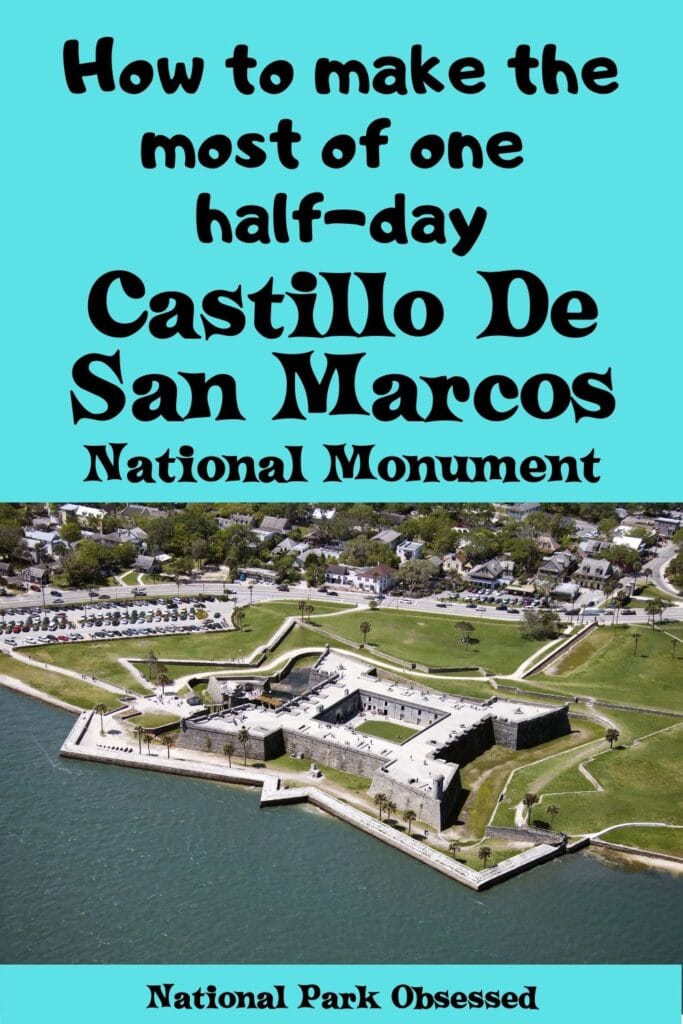 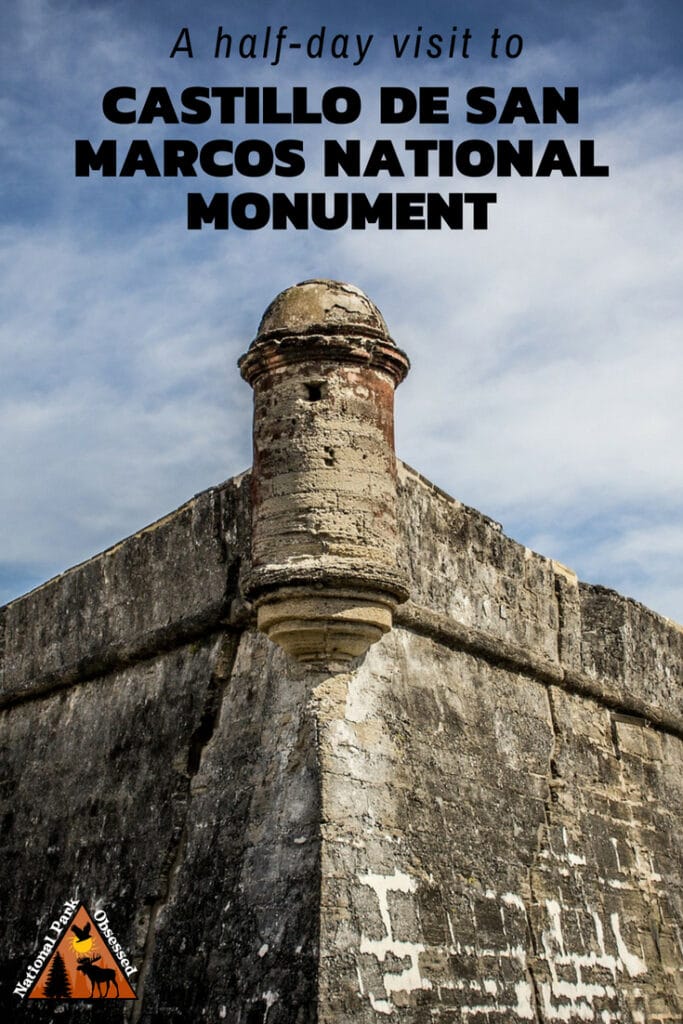 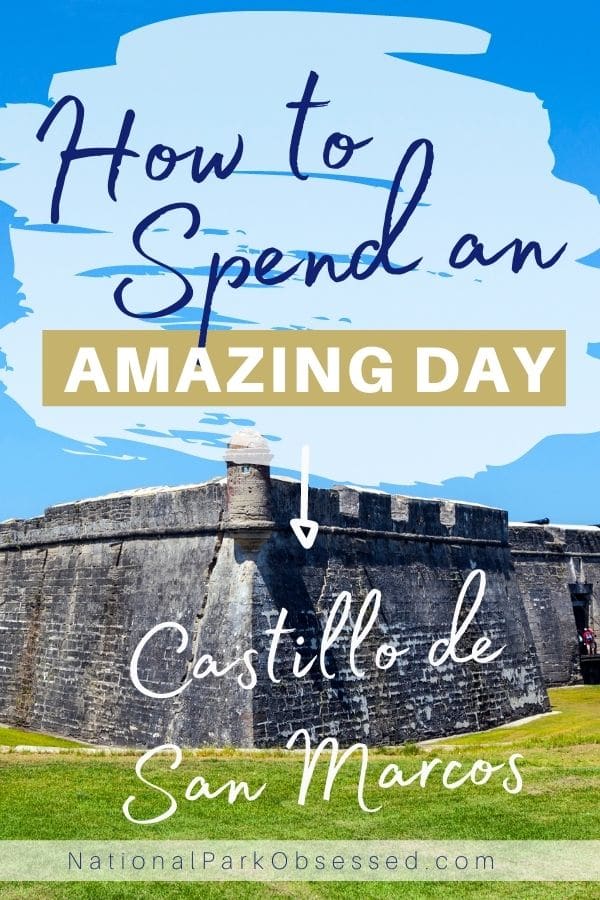 In one of North America’s oldest cities (that was founded by Europeans), a historic fort has stood the test of time.  The Castillo de San Marcos has had a colored history from the time it was built.  Ownership has changed from Spanish to English to Spanish to American.  The name of the fort has changed with its owners.  The fort has stood the test of time and while not used to defect the city of St. Augustine, it is one of the most popular and important sites in the city.  A visit to Castillo de San Marcos National Monument is necessary to understand the history of the city and the state of Florida.

The city of St. Augustine was founded in 1565 by  Pedro Menéndez de Avilés, a Spanish conquistador.  The city was founded to defend Spain’s claim to what is now the state of Florida.  The French had established Fort Caroline about 40 miles north in near present day Jacksonville.  After establishing the city, Avilés attacked Fort Caroline and burned it to the ground.  Ending the French interest in Florida.

Over the next hundred years, the city would be sacked twice by English pirates, Sir Frances Dreak in 1586 and Robert Searle in 1668.  In conjunction with Searle’s raid, the city of Charleston was founded and the Spanish realized they need better protection than the wooden forts they had been building.

In 1672, the constitution of the masonry fort of Castillo de San Marcos was started.  It took 23 years to build.  The fort is a masonry star with four bastions, a ravelin, a sally port, and moat. The fort is made of coquina. This sedimenary rock is made of seashells and coral that has cemented together.  The coquina is a soft stone that cannon balls for sink into wall rather shatter the wall.  During the 1740 Seige of St. Augustine, the British forces thought the fort was magic since their cannon balls never seemed to damage the fort.

In 1763, Castillo was handed over to the British as part of the Treaty of Paris.  The fort was renamed Fort St. Mark.  The fort was neglected until 1776.  During the American Revolutionary War, the fort was used as a military prison and improvements were made.

After the Revolution, the fort was returned to Spain and renamed Castillo de San Marcos.  The held it until conflict with the newly formed United States resulting in Spain ceding Florida in 1821.  The fort was quickly renamed after General Francis Marion “The Swamp Fox.”

The fort became part of an extensive network of masonry forts to protect the American coast line.  The fort was mostly used as a prison during the Seminole Wars.  Upon the start of the American Civil War, Florida joined the Confederate States of America.  The Union left the defense of Fort Marion to a single Union soldier.  Said soldier refused to surrender the fort, unless he got a receipt of the fort.  Rather than take the fort, the Confederates gave him his receipt and sent him on his way.  The fort’s artillery was dismantled and set to other forts.

After the war, the fort went back to being a prison until 1924 when it became a national monument.  The fort name was returned to Castillo de San Marcos in 1942 to honor its Spanish heritage.

In the entire history of the Castillo de San Marcos, the fort was never captured by force. 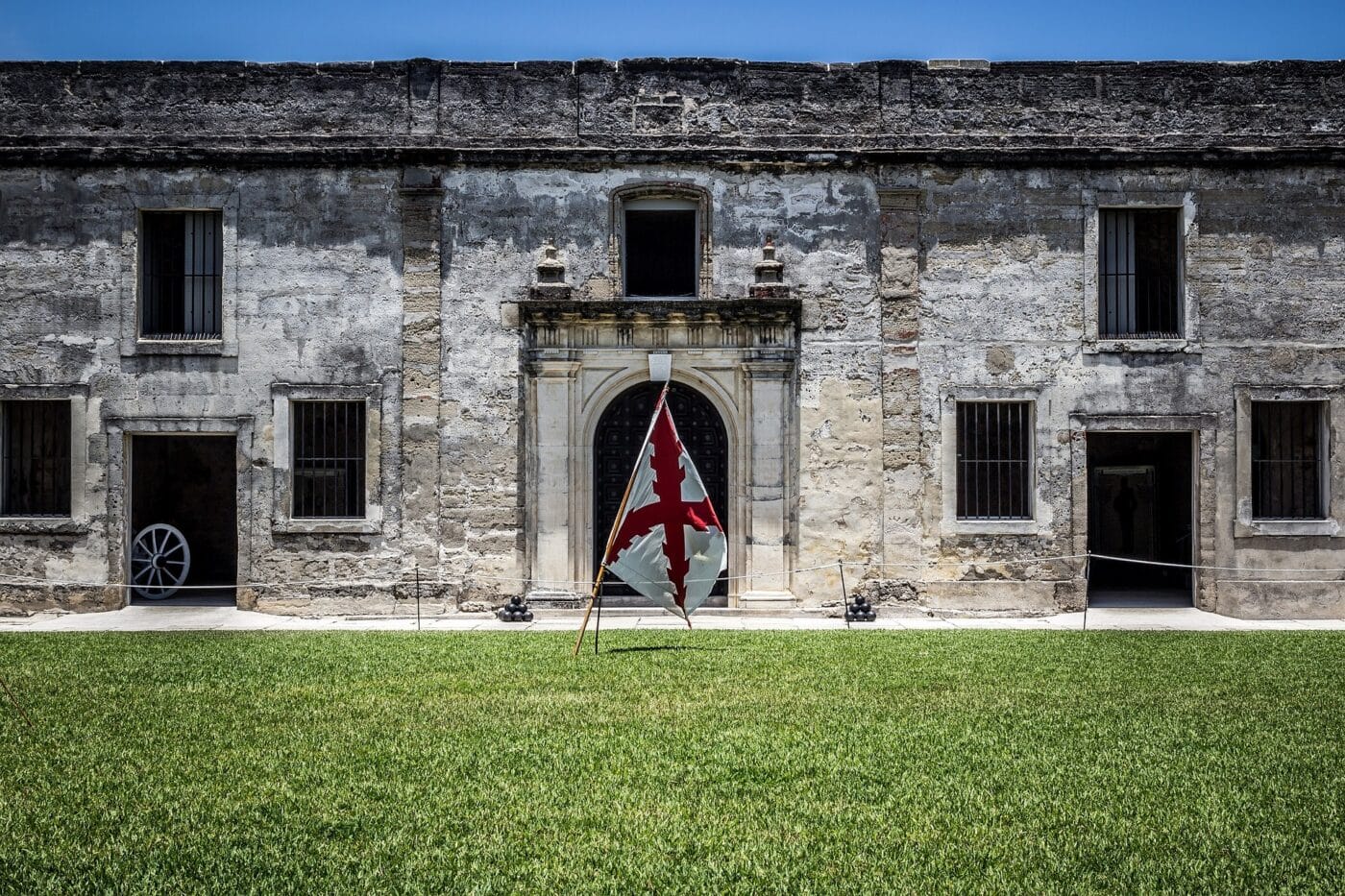 If you are driving to St. Augustine, please be aware that this is a historical city with narrow streets and parking is limited.  There is a NPS parking lot at Castillo de San Marcos National Monument.  Parking is limited and fills early in the morning.  There is a public lot about a block from the Fort but it does usually fill in the early afternoon.  Get a Hop-On, Hop-Off St. Augustine Trolley Tour ticket.  This give you access to a short tour and makes it easy to get around to all the museums and historical sites.

Where to stay in Castillo de San Marcos National Monument

Saint Augustine offers a range of hotels.  If you are on a budget, I recommend Old Town Inn.  This hotel is basic but comfortable.  The rooms cost between $50-90 depending on the season.   My favorite hotel in the area is the Pirate Haus Inn. The Pirate Haus is a pirate themed bed and breakfast.  A stay in this hotel is a lot of fun.

The park costs $15.oo per adult (over 16 years old) and 15 and under is free.  If in possession of America the Beautiful Pass, 4 adults can enter for free. 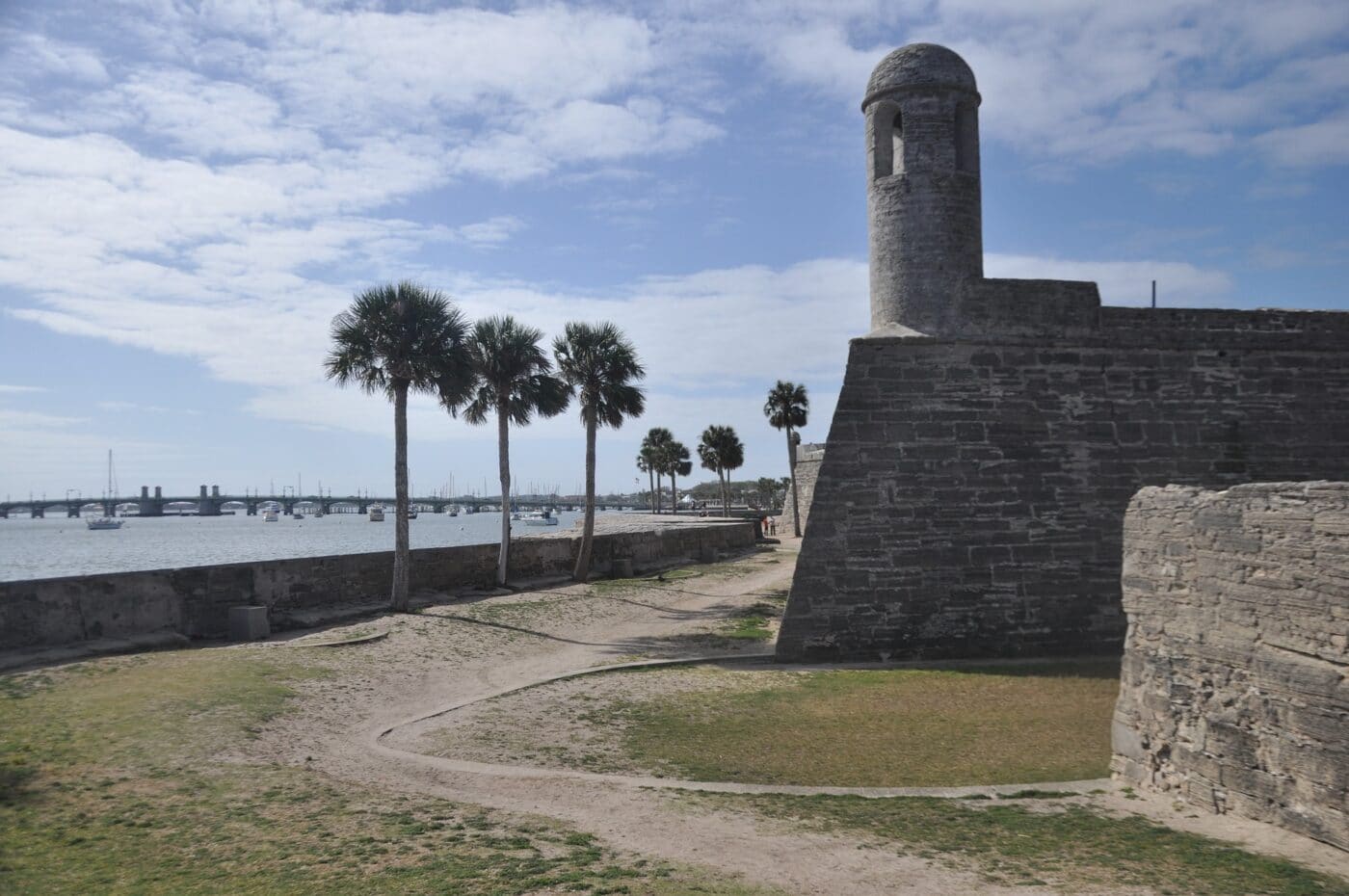 The fort opens at 8:45 AM and closes at 5:00 PM.  Start your tour of Castillo de San Marcos National Monument at the sally port.  As you paid the entrance fee, you should be given a map and piece of paper with today’s events on it.  Check the times for the Historic Weapons Demonstration.  Typically, these occur on Friday, Saturday, and Sunday at 10:30 AM, 11:30 AM, 1:30 PM, 2:30 PM and 3:30 PM. Time your tour so you can see Weapons Demonstration.  If you are lucky, there will period dress reenactours around the fort to discuss life in the fort.

Stop in the sally port and check out how thick the walls are.  The vary from 14 to 19 feet at the bottom up to 9 ft at the top.  Head to the left thru a door in the sally port to check out the guards quarters.  The guards at the gate would have used these rooms during guard duty.  Across the hall is the bookstore.

In the courtyard is the well that is used to supply water during a seige.  The next rooms are connected and showcase the construction and how the coquina made the fort so impenetrable.  The next rooms show  case the original fort design vs the expansions done during the Spanish and British conflicts of the 1730-1750s.  The castemates where added to allow for larger guns to be added to the gun deck. 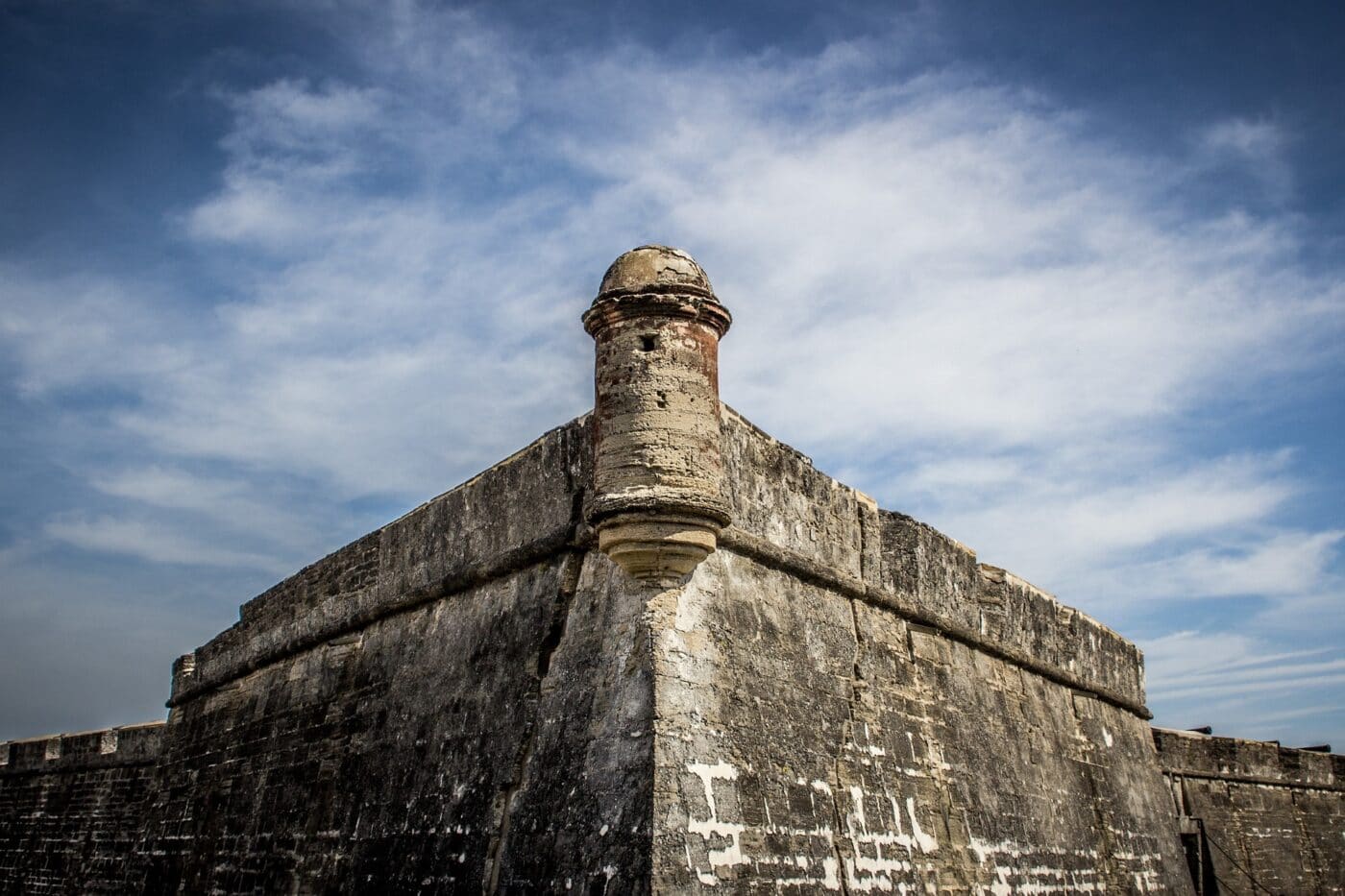 The theater shows a 25-minute film on the fort and its early history.  The next couple of rooms talk about the British period, second Spanish period, and the US period in the fort.  The tour of the fort rooms should take about a hour to hour and half depending on how many of the signs you read.  Once done head up to the Gun Deck stairs and take a look of St. Augustine from the top of the walls.  The view of the city and the harbor is amazing.

The Historical Weapons Demonstration is a historical reenactment of a cannon firing. A group of volunteers explain how Spanish soldiers would operate as a team to fire the cannon in protection of the city.   The reenactment is a highlight of any visit to Castillo de San Marcos.

Take some time to explore the grounds outside of the fort to get a full prespective on the epic piece of engineering.

St. Augustine is a city full of rich history.  Here are some amazing ways to learn about the rich and spooky history of St. Augustine.

Powered by GetYourGuide. Become a partner.

What do you look forward to on your visit to Castillo de San Marcos National Monument?

Check out some of our favorite Products. 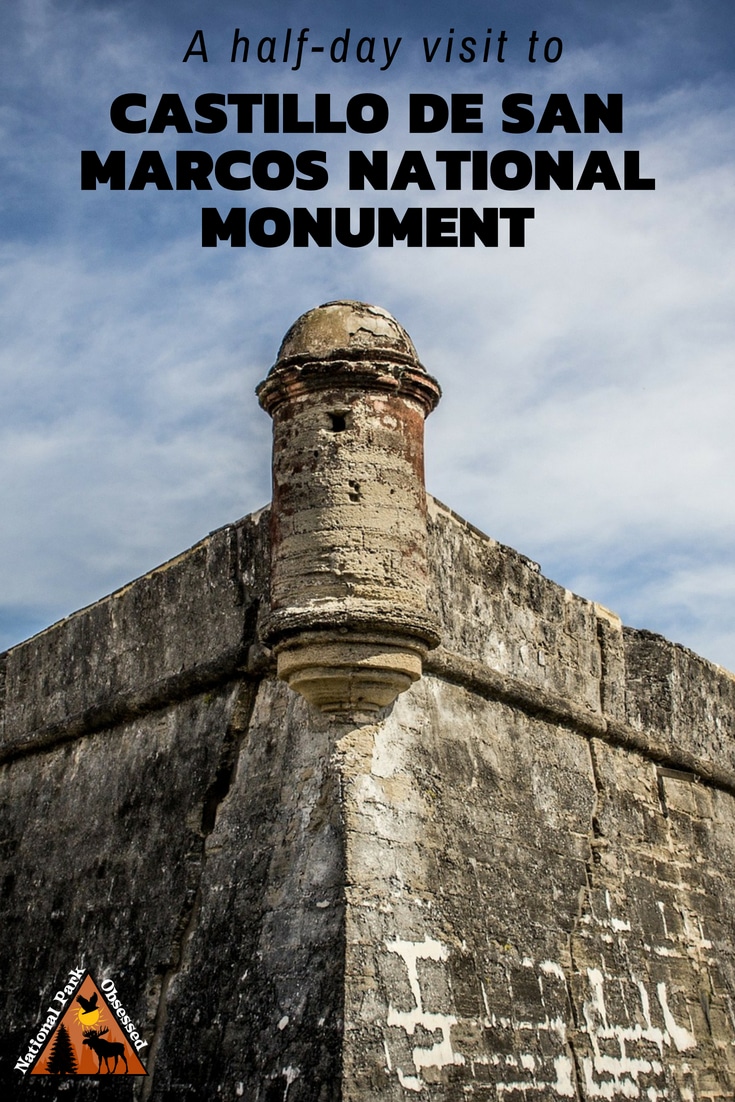 The fort reminds me a bit of the one in Puerto Rico. I always love a good fort to explore and my friend that lives near St. Augustine is always raving about it. I’d definitely be up for checking this out if I ever make it to Florida with time to explore around a bit.

The one in Puerto Rico was also built by the Spinach so they would look similar.

Glad to find this slice of history of USA that we don't know much about. Great photographs too. Especially those fort walls overlooking the bay is a great frame.

It is amazing how much history we don't actually talk about in the United States.

Gosh those walls really are thick by the look of things. I guess, like so many coastal forts they had to be thick to withstand the onslaught of cannonballs from the ships in the bay. It's great to see that is has been so well preserved.

The walls are between 10-14 feet. Deflecting cannon balls was part of the plan.

It's funny, in British history, Francis Drake isn't a pirate, he's a hero :D The fort certainly has a lot of history, it's amazing that in all those conflicts the fort was never taken! The reenactment sounds like fun, it would be cool to catch a glimpse of what it was like to fight off pirates!

I hear this was one of the oldest cities in US It’s such a beautiful place. I'd love to visit the fort as well! Your photos make me want to visit and put it on my travel list!

It is the oldest European founded city in North America.