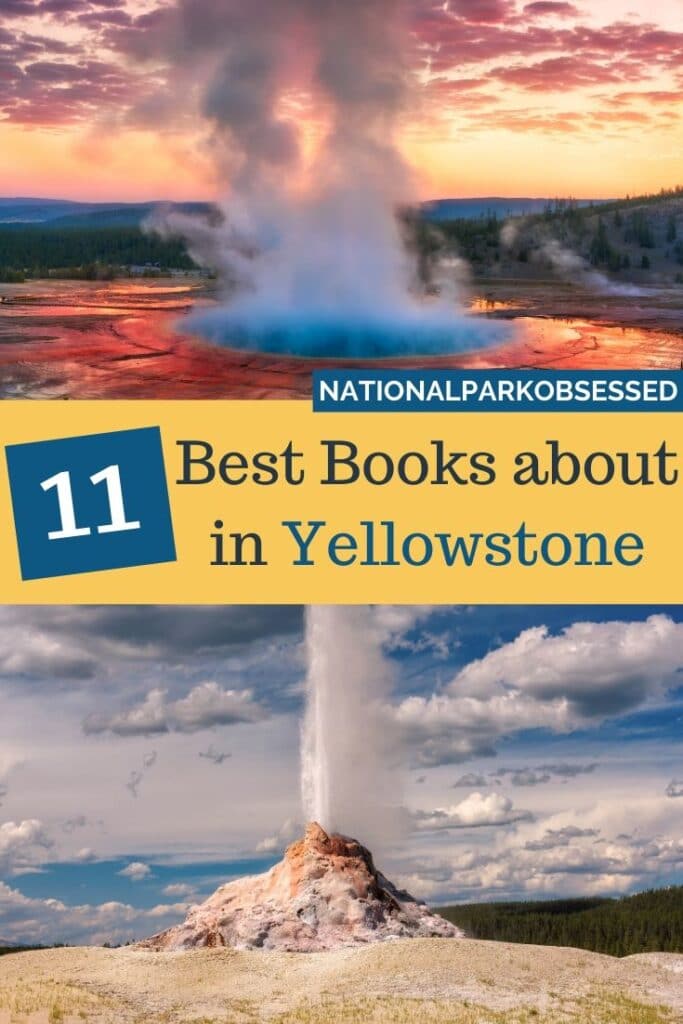 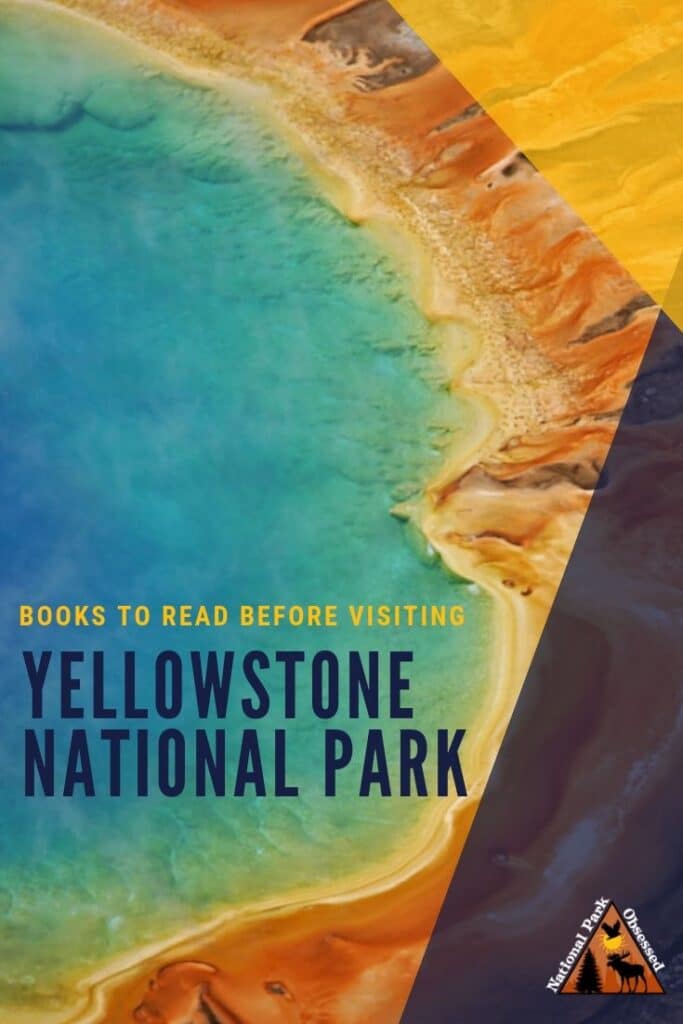 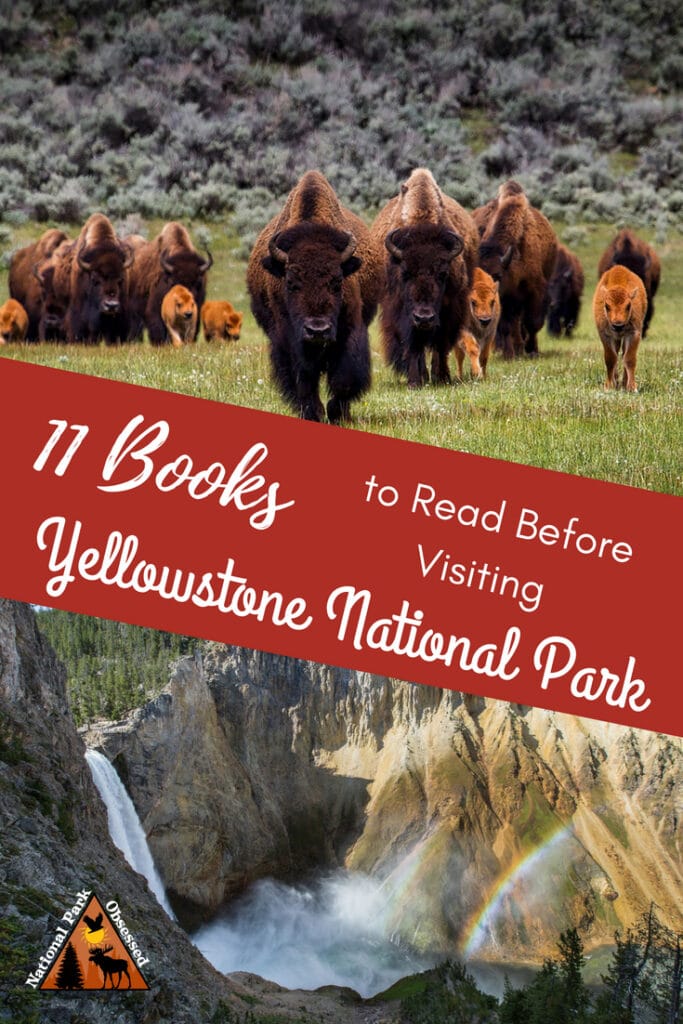 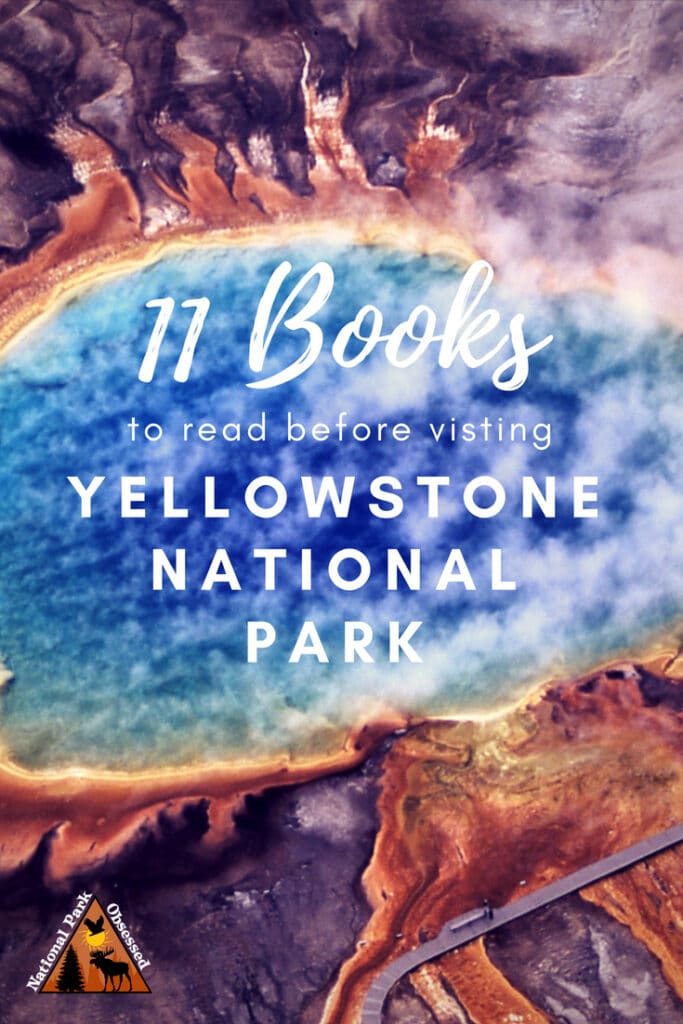 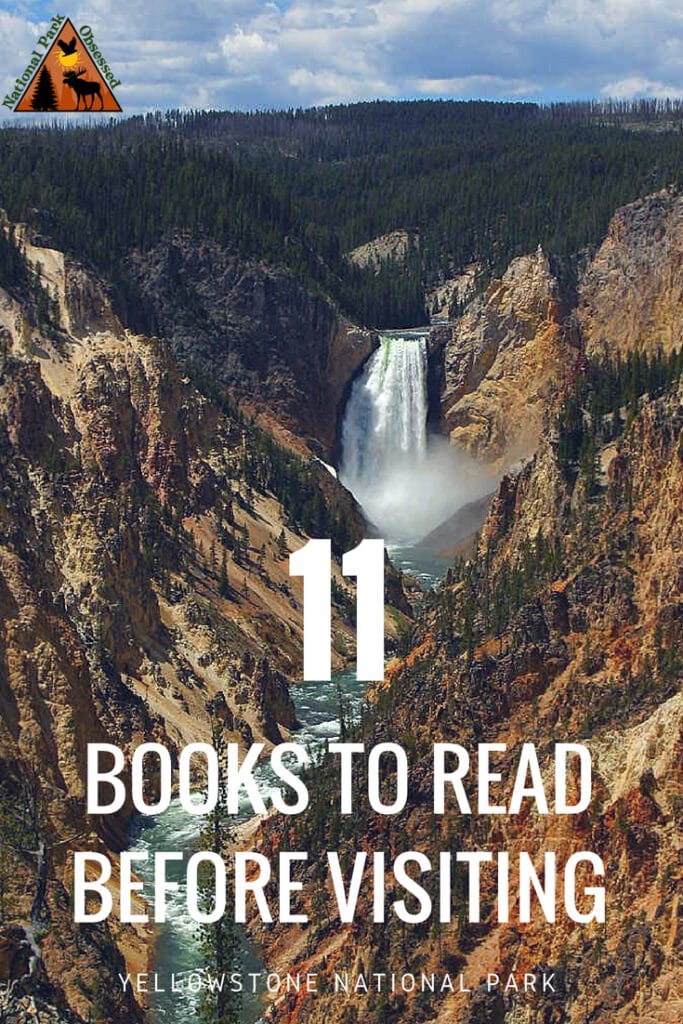 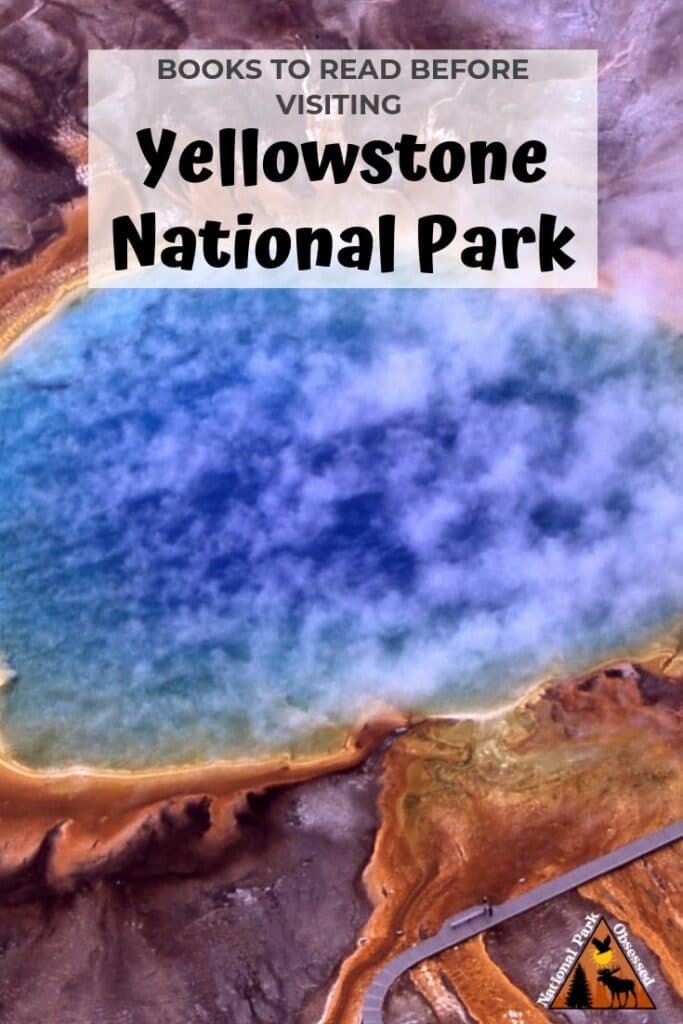 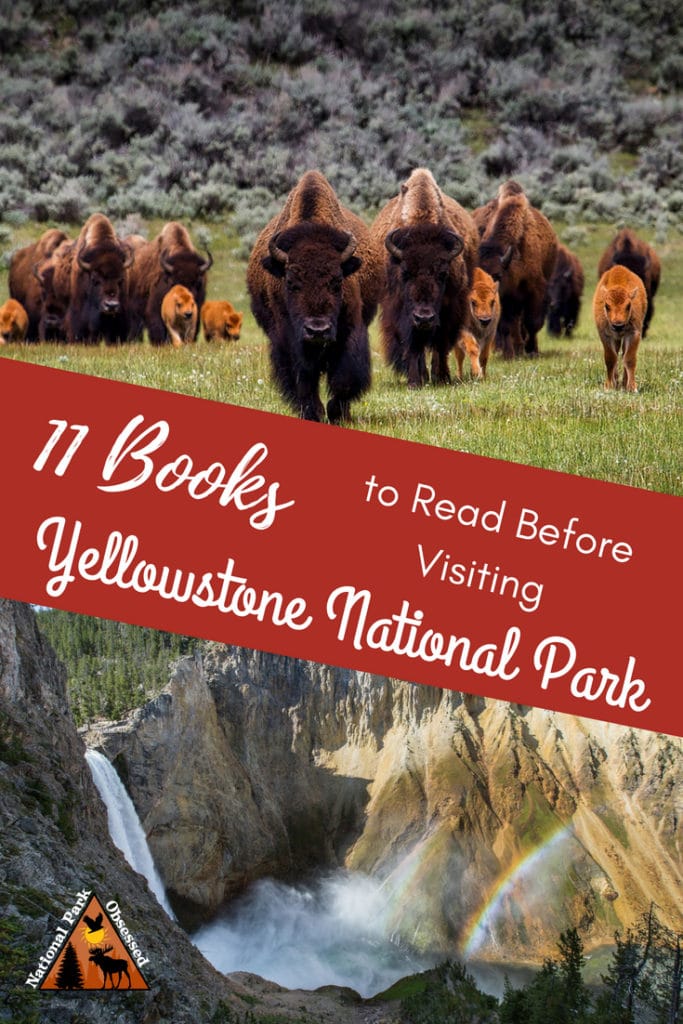 The world’s first National Park has been part of the history of conservation in the United States since shortly after it was found.  Yellowstone National Park is as American as apple pie.  The park is a natural wonder full of geysers, waterfalls and wildlife.  It has taken a lot of work to build the park to the jewel we know today.  Exploring the history of Yellowstone is best done before a visit to the park.  Here are 11 books to reach before visiting Yellowstone National Park.  These books will enhance your appreciation of this epic national park. 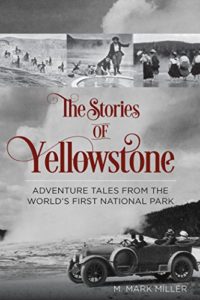 The Stories of Yellowstone

The Stories of Yellowstone: Adventure Tales from the World’s First National Park shares the story of Yellowstone from the first European visitors to the building of the first luxury hotels in the area.  The tales are collected from the letters, journals, and diaries of the early visitors.  They tell the stories of now dormant geysers eruptions to the vibrant colors of hot springs.  They are tales of the mistakes made like feeding the wildlife.  They share the history of the park in those early days. 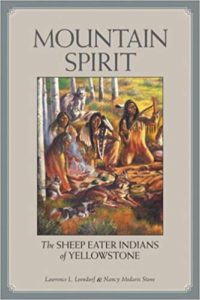 Mountain Spirit: The Sheep Eater Indians of Yellowstone showcases the Native American groups that visited or lived in the Yellowstone area.  The Shoshore group of Tukudika (Sheep Eaters) actively live in the area. They hunted the big horn sheep in the region.  They moved with the seasons in small kin-based groups.  Mountain Spirit paints a picture of a lost way of life and is largely ignored in the history of Yellowstone. 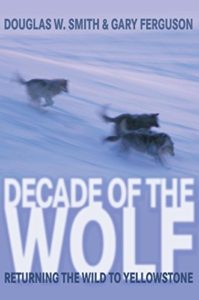 Decade of the Wolf

Decade of the Wolf: Returning the Wild to Yellowstone dives inside the Yellowstone Wolf Recovery Project.  In 1995 and 1996, 31 Canadian gray wolves were released into Yellowstone National Park.  The book examines how the return of an apex predators had on the Yellowstone Ecosystem.   The project was a resounding success, such that they didn’t need to complete all the planned releases.  Douglas shares the hard facts about the park wolves and the stories of their lives.

In May 2018, I had a chance to meet Douglas Smith one morning while watching the Slough Creek Pack’s den as they were trying to count the number of wolf pups in the den.  It was amazing to learn about the wolves from the man who helped return them to Yellowstone. 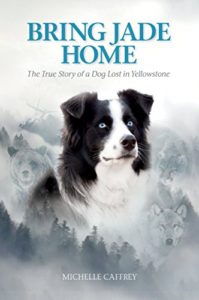 Bring Jade Home: The True Story of a Dog Lost in Yellowstone and the People Who Searched for Her is the amazing true story of one dog lost in Yellowstone National Park.  David Sowers and Laura Gillice were on an auto tour of Yellowstone National Park with their dogs: Jade and Laila.  While driving their car was hit head on by a pick-up truck.  The accident left both David and Laura injured.  They were medevaced out of the park.  When the rangers when to get the dogs out.  Jade slipped free and bolted.  It would be 42 days before Jade was found.   The book shares the stress and unrelenting effort to find Jade. 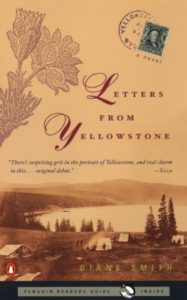 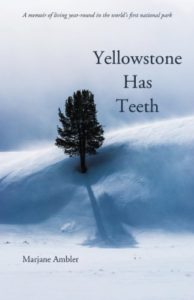 Marjane Ambler lives on the shores of Yellowstone Lake.  Yellowstone Has Teeth is Ambler’s way of showcasing a side of the park every few visitors will ever see.  She relays how small margins can mean the difference between life and death.  She talks about dealing with the issues of the park from avalanches to grizzly bears.  Her work is about the fight for suvivual people living in Yellowstone face and have faced since the land was first inhabited. 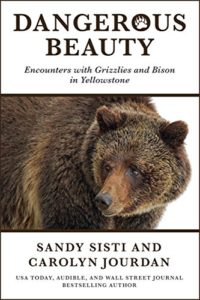 Dangerous Beauty: Encounters with Grizzlies and Bison in Yellowstone is a collection of almost 100 personal stories from Yellowstone National Park.  These are from the men and women who have explored the landscape and have experienced it at its worst.    The stories range from dealing with angry or scared wildlife to getting steamed by a geyser.  The book showcases the most incredible stories from the wildlife photographers, scientists, wilderness guides, rangers, and professional trackers of the park. 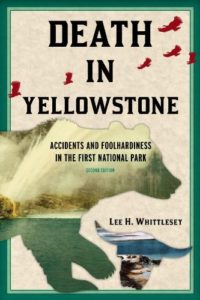 Death in Yellowstone: Accidents and Foolhardiness in the First National Park is as the title suggest all about the various ways people have dies in Yellowstone National Park.  Whittlesey has traced researched every reported death in the park.  He has followed as many of the stories as possible.  Yellowstone isn’t Disneyworld.  The park isn’t safe. Every year a couple of people die in the park.  This includes animal encounters, falling (or jumping) into hot springs, falling off cliffs.  Death in Yellowstone should serve as a warning to guest that bad things can and do happen to visitors to the park. 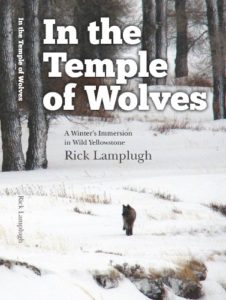 In the Temple of Wolves

Rick Lamplugh spent several winters living in Lamar Valley in Yellowstone National Park.  He shares his story in In the Temple of Wolves: A Winter’s Immersion in Wild Yellowstone. Lamar is the best habitat for wolves in the park.  Working in this remote corner of Yellowstone, Lamplugh showcases life in Lamar during the winter.  He shares his adventures and mis-adventures in the snow while helping to manage both the animals and the human park visitors.  He explored much of the valley on skis and snowshoes.  He shares the cycle of life and death in the park. 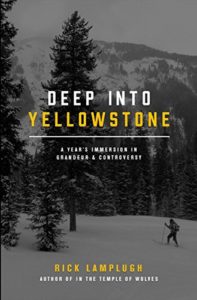 Deep Into Yellowstone: A Year’s Immersion in Grandeur & Controversy is Lamplugh’s second book on life in Yellowstone.  In this book, he shares life during all four season in Yellowstone.  He also takes a look at recent controversies in and near the park such as removing grizzlies from the endangered species list, hunting of wolves outside of Yellowstone’s orders, and the ongoing flight over the wolves.  He doesn’t shy away from these issues as they are part of the fabric of Yellowstone. 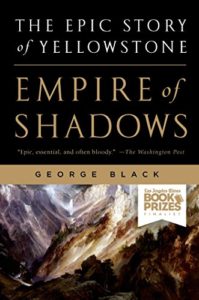 Empire of Shadows: The Epic Story of Yellowstone shares the story of the creation of Yellowstone.  Black examines the parts of Yellowstone history from the Indian Wars to the ealry explores who returned with tails of the wonders of Yellowstone.  He look at the fight to create Yellowstone  and the men who helped create and developed the world’s first national park.  He discuses men such as scientist Ferdinand Hayden, photographer William Henry Jackson, and painter Thomas Moran.  He builds on how the park was brought under US Cavalry protection by Civil War General Phil Sheridan.

What books about Yellowstone did we miss with out 11 Books to Read Before Visiting Yellowstone National Park?

Get help planning your trip to Yellowstone National Park

Thanks for listing "Bring Jade Home." Team Jade -David, Laura, and Jade herself- were at the Old Faithful Inn signing and "Paw-tographing" books this summer. We had a great time telling her amazing story. We plan to make this an annual event. Michelle Caffrey, Author

Your welcome. It is an amazing story. I might have to see if I can make it then next year.