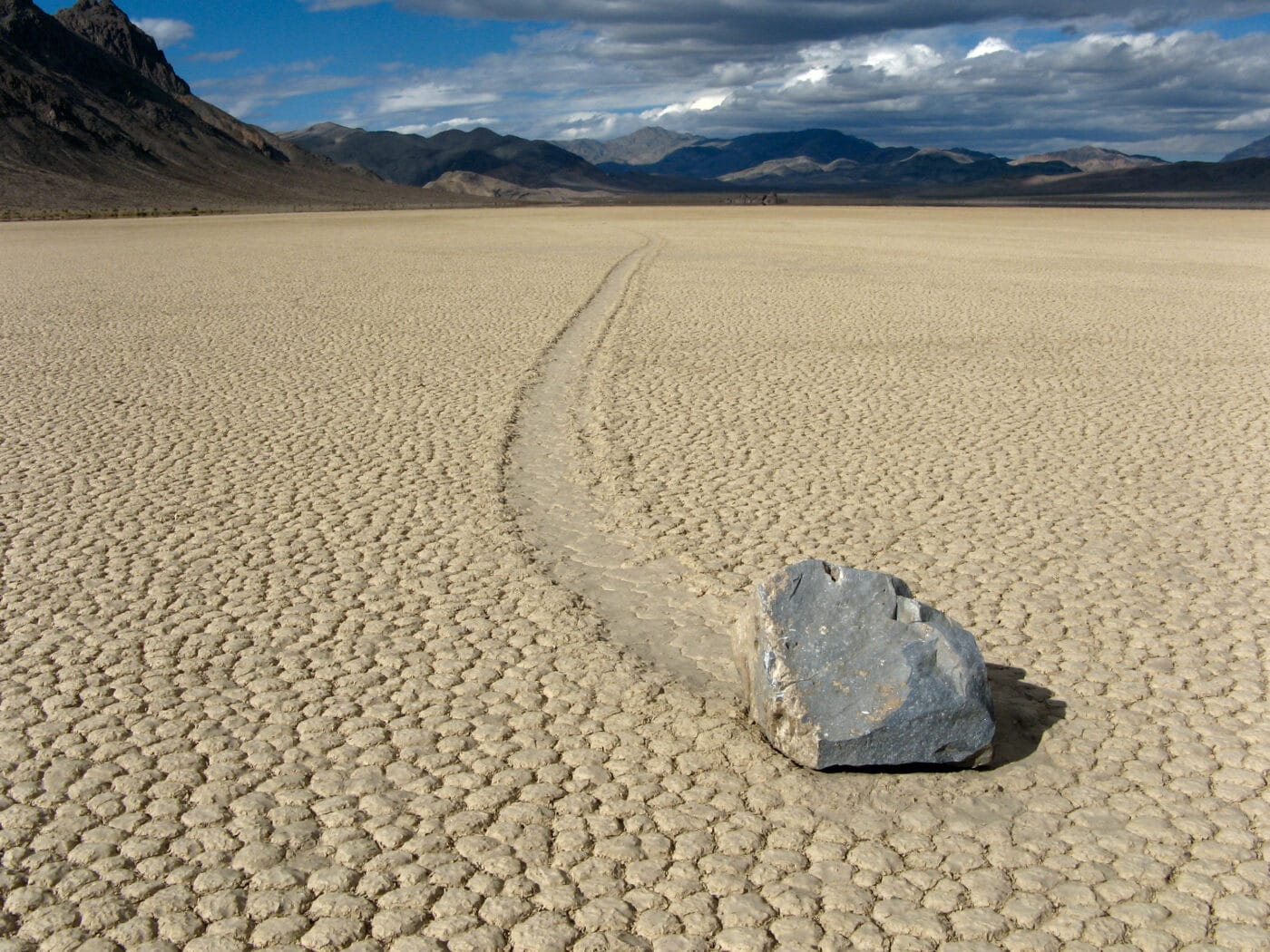 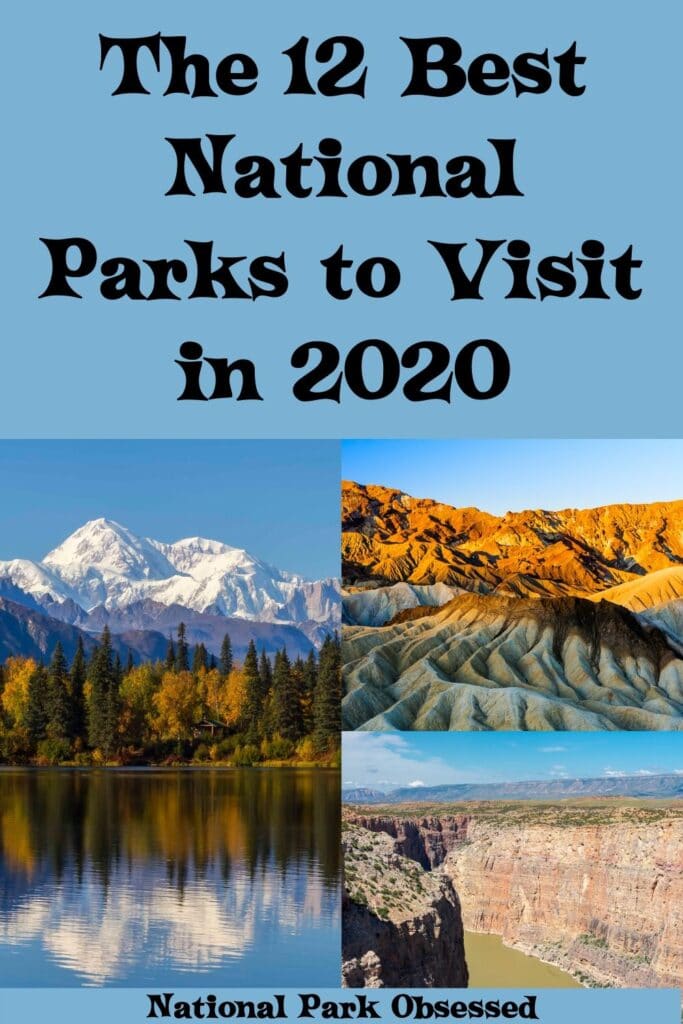 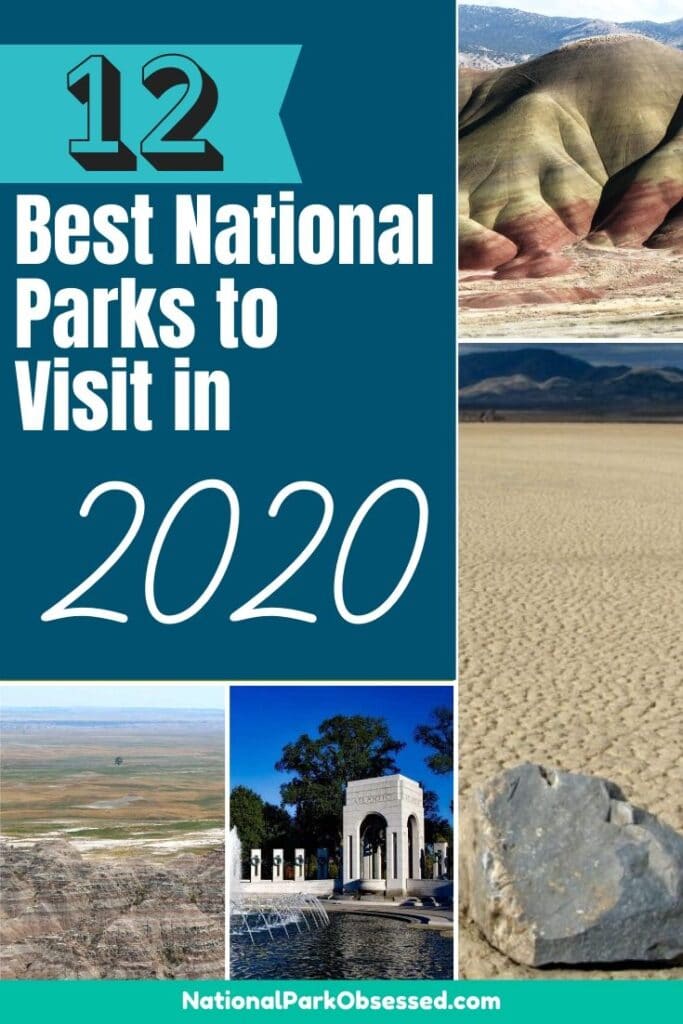 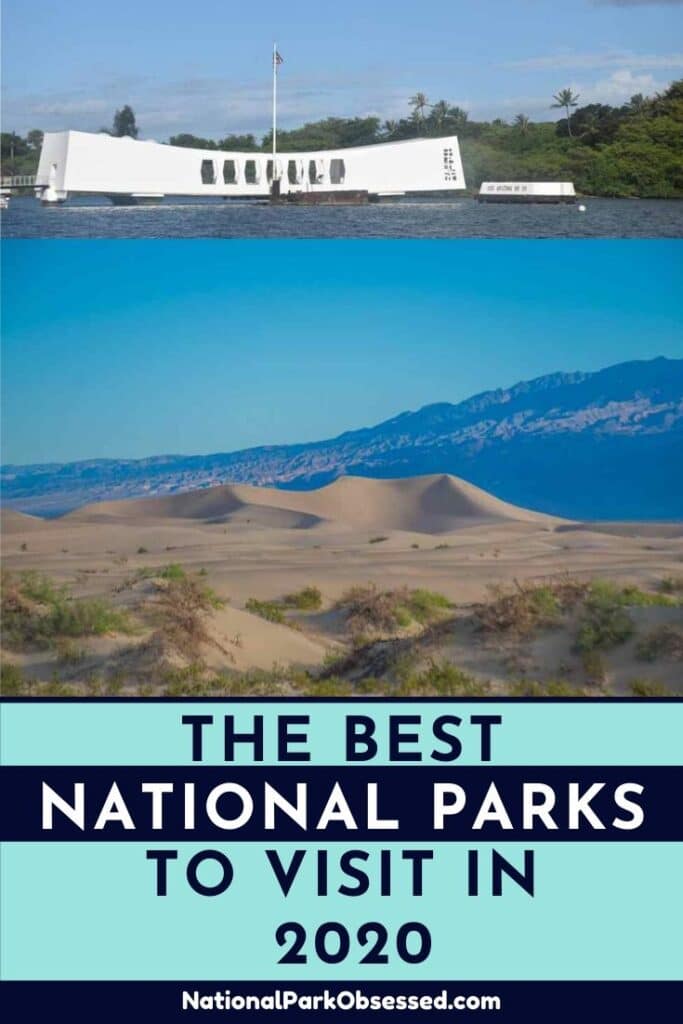 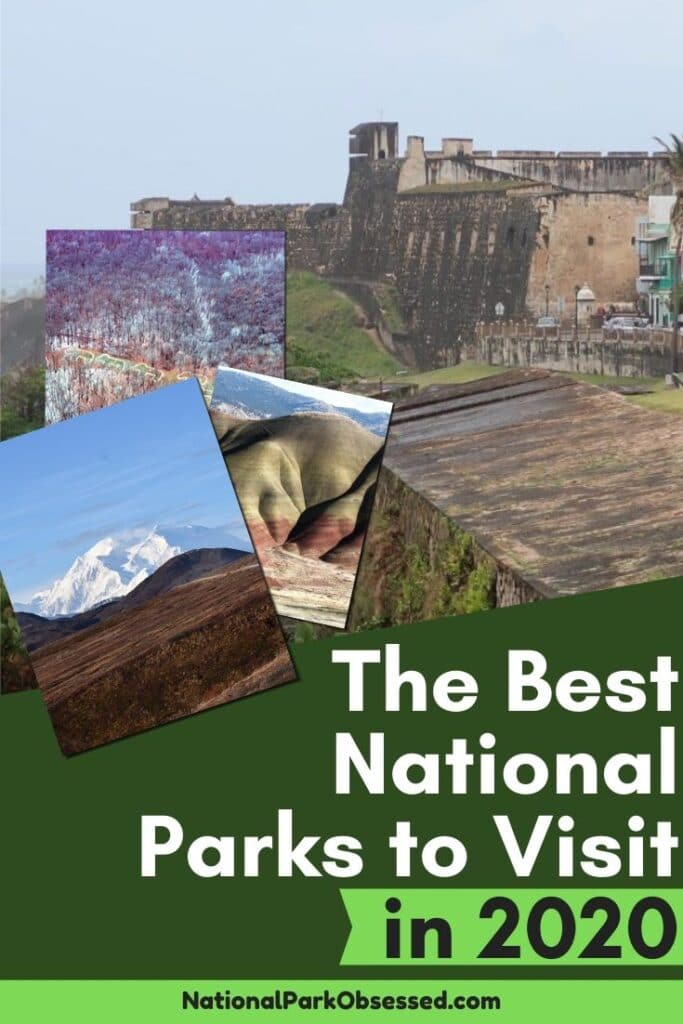 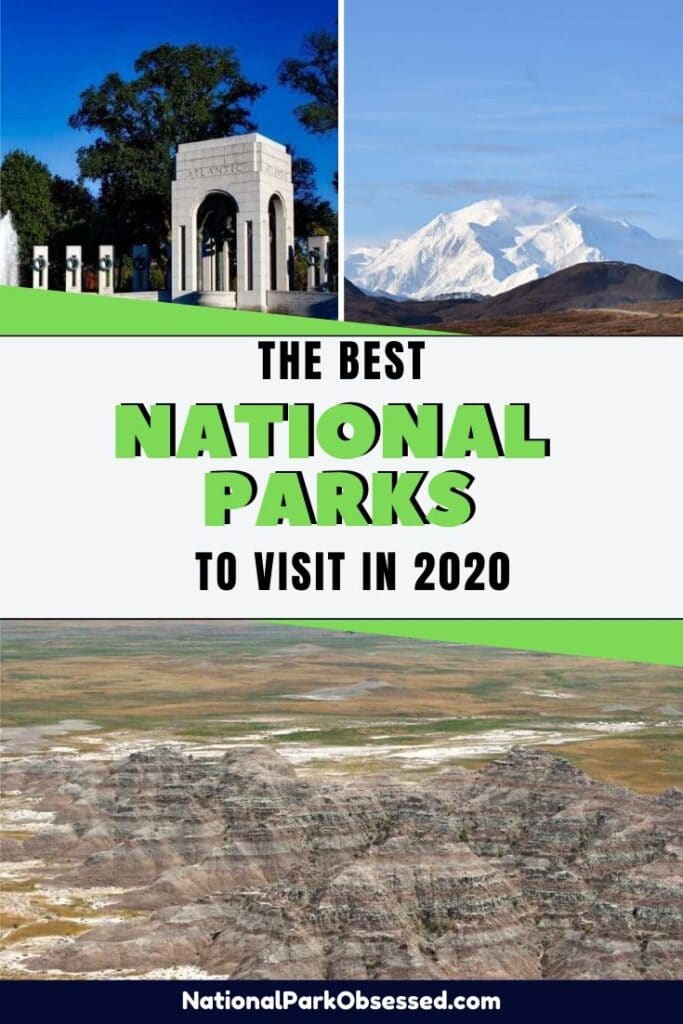 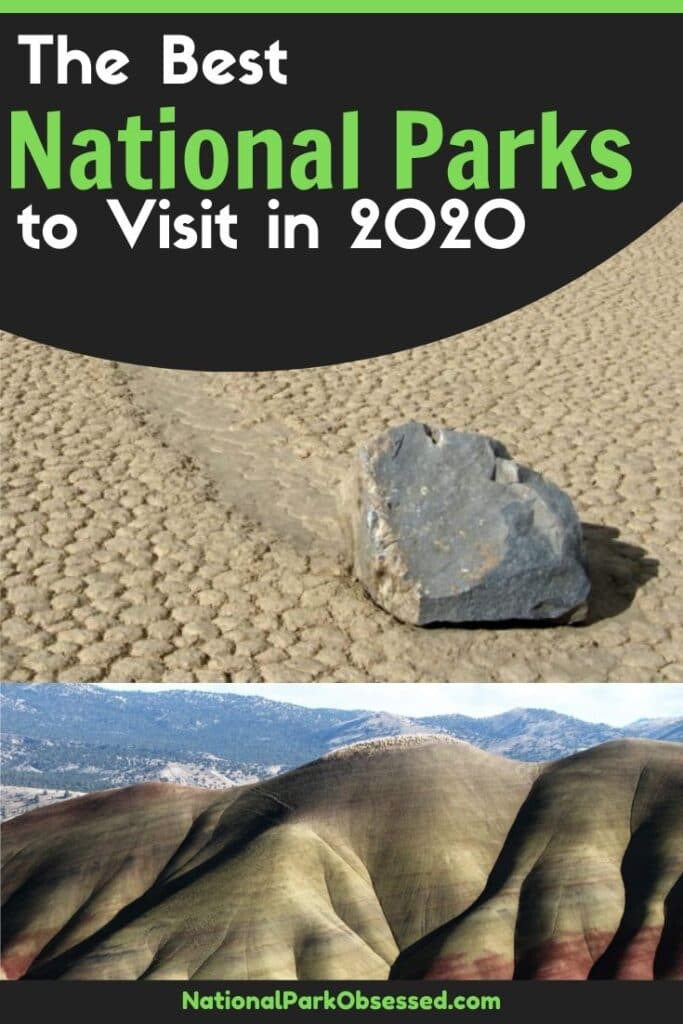 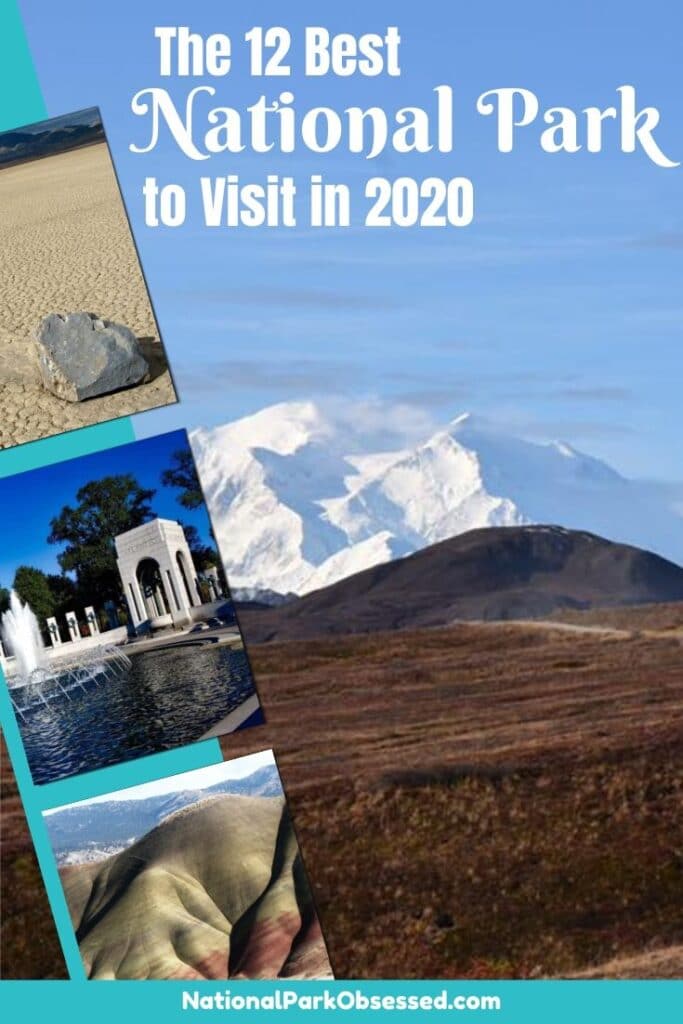 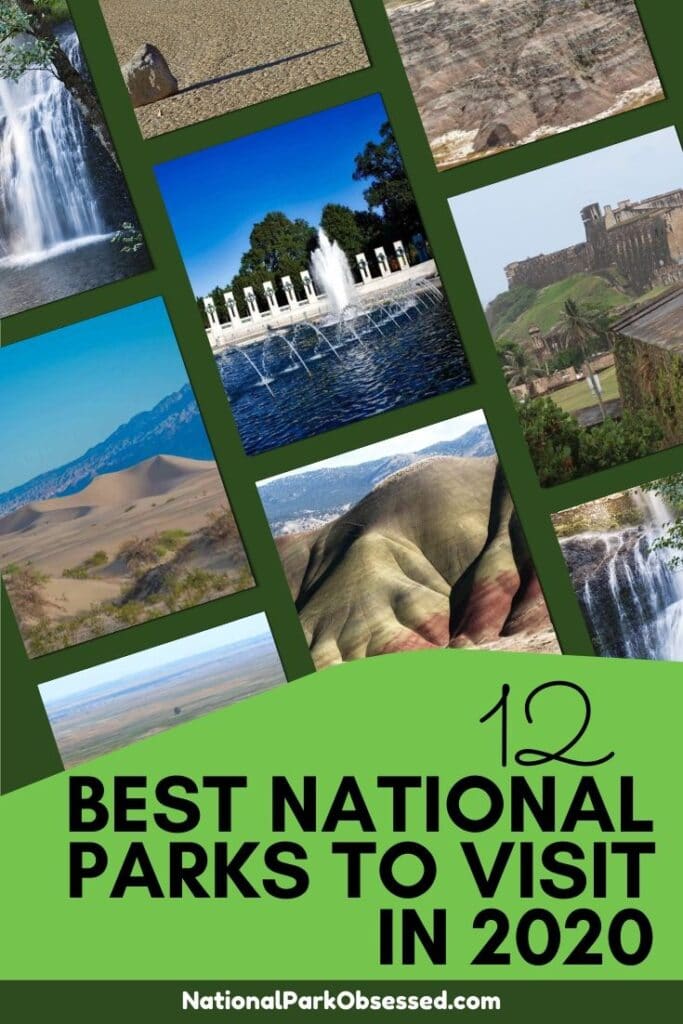 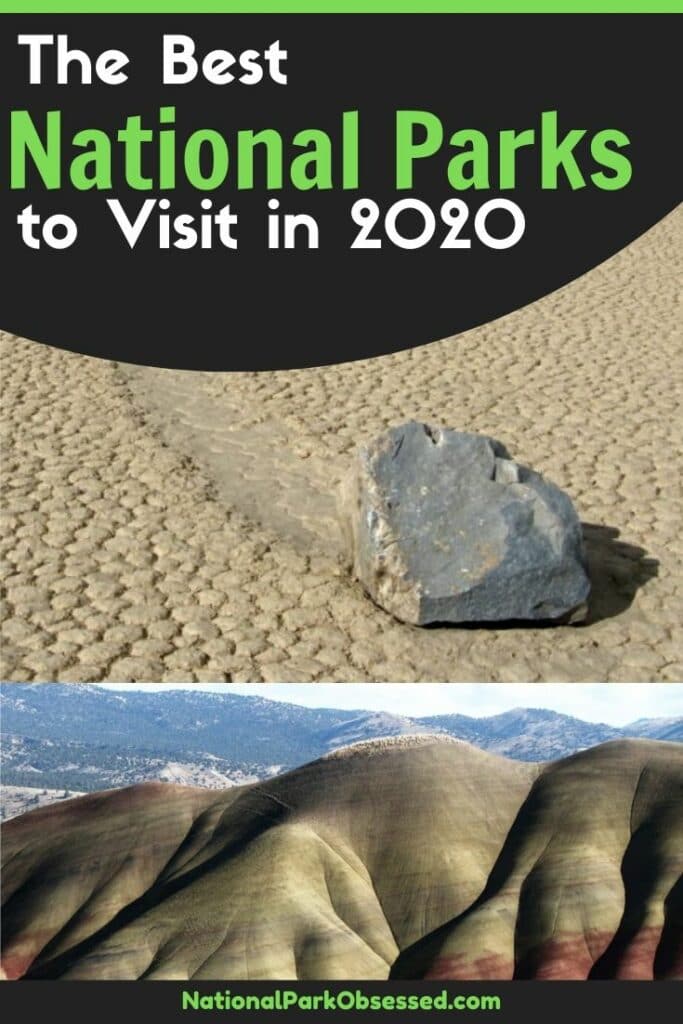 How have your 2019 adventures been? The year is almost over. Soon 2020 will be here and we will have a whole new year of adventures. 2019 saw the number of National Park Service units to grow to 419 with redesignation of the World War II Valor in the Pacific National Monument into the Tule Lake National Monument and Pearl Harbor National Memorial. We gained our 61st National Park with the elevation of Indiana Dunes National Lakeshore into a National Park. We have gone through the complete list of national parks and picked a few of our favorites or wishlist parks for 2020.  Here are 12 National Parks to visit in 2020.

Best US National Parks to Visit in 2020

Looking for something international? Check out the 12 Best International National Parks to visit in 2020.

Map of United States National Parks to Visit in 2020

Bighorn Canyon National Recreation Area is a diverse national recreation area in Montana and Wyoming. The main feature of Bighorn Canyon is its massive canyon and lake. In 1966, the Bighorn River was damned by the Yellowtail Dam and the Bighorn Lake was created. The lake is 71 miles long and fills Bighorn Canyon.

The Recreation Area is divided into a North and South District. The North District is accessed via Fort Smith, Montana and provides a seasonal visitor center at Yellowtail Dam and lake access at Ok-a-Beh Marina. Recreation activities in this area are limited to the dam overlook and the lake. This area is inside the Crow Indian Reservation. Please respect their land.

The South District is accessed via Lovell, Wyoming and provides access to Horseshoe Bend and Barry’s Landing boat launches. This district has a scenic drive along the canyon and through the Pryor Mountain Wild Horse Range. There are 27 miles of hiking trail in this district.

The Cane River Creole National Historical Park preserves and interprets the history of the Magnolia and Oakland Plantations. The plantations are the most intact examples of French Creole cotton plantations. Creole is often used to describe the unique mix of cultures found in Louisiana and historically the term meant Louisiana-born people. These plantations have a long and storied history. They were both owned and operated by the same Creole families for almost 200 years. This includes not just the landowner owners. Many of the enslaved workers transitioned from slavery to sharecropping after the Civil War.

National Park Service has developed a comprehensive interpretive program at Cane River that examins the history of this plantation to encompass all aspects of its history. Visitors have the opportunity to learn about the lives of the enslaved Africans, the trapped sharecroppers as well as the landowners.

Best Time to Visit: February to May

Casa Grande Ruins National Monument protects the remains of Ancestral Puebloan of the Sonoran Desert (Hohokam) structures in the Gila Valley. The main feature of the park is the four-story structure referred to by the Spanish as Casa Grande.  There are several other ruins on-site such as a ball court.

This park is small and can be visited in under two hours, but take your time and enjoy the ruins. The park has a very informative film that will help places these ruins in historical context.

Must-See: Walk around the ruins and peer into Casa Grande.

Visitors to Death Valley have the opportunity to explore salt flats, hike in canyons, explore sand dunes and climb mountains. This park has so much to explore. Adventures visitors should consider renting a jeep and heading out to the Racetrack and see the mysterious moving rocks.

Death Valley is more than a Nationa Park. It is an International Dark Sky Park and the principal feature of the UNESCO Mojave and Colorado Deserts Biosphere Reserve.

Best Time to Visit: October to May

Denali National Park and Preserve is the hidden gem of the well-known national parks. Tucked away in central Alaska, Denali is home to North America’s highest mountain. The mountain and the park share the same name – Denali or “the great one.” Denali is a great park. The park is home to some of the most impressive wildlife in North America. Lucky visitors will see the Denali Five – Moose, Wolf, Brown Bear, Caribu, and Dall Sheep.

Most visitors to Denali take a 6-12 hour bus tour along the park’s 92-mile road, but the park is so much more. Denali offers unparalleled hiking, most of which is off-trail and hikers are free to hike where ever they please. Visitors are also able to take flight tours in the park and even land on a glacier.

Must-See: Hike Savage Alpine Loop and enjoy the view from the ridgeline.

Effigy Mounds National Monument is located on the banks of the Mississippi River. The site protects more than 200 prehistoric Native American mounds. The mounds were built from 1,000 BC to 1,000 AD during a time known as the Woodland period. The effigy mounds are burial sites of the Native Americans of the region. The mounds are in the shape of birds, lizards, turtles, and bears.

There are 14 miles of hiking trail in Effigy Mounds. Most of the mounds require a short couple mile hike to reach. Please note that this is a cemetery and stay off the burial mounds and leave all artifacts and bones where you find the.

John Day Fossil Beds National Monument is a series of colorful hills that are known for their fossil-bearing rock formations. Over 45,000 fossils spanning over 40 million years have been found in the area. The fossils in the area are significant because they have allowed scientists to track the evolutionary changes of both plant and animal species in the area. The rock evidence has shown that the area has transitioned from semitropical forest to savanna grassland and several other environments.

The park is made of up three units in Easter Oregon. The three units are Sheep Rock, Painted Hills, and Clarno. Visitors to the units today will find a semi-desert shrubland with colorful badlands and a riparian zone along the John Day River Basin.

Best Time to Visit: April and May or September and October

San Juan National Historic Site protects the Spanish masonry fortifications for Old San Juan. The site is made up of four sites – Castillo San Cristóbal, Castillo San Felipe del Morro, City Walls of Old San Juan and Fortín San Juan de la Cruz (El Cañuelo). All four sites were built during the Spanish colonization of Puerto Rico to defend San Juan Bay and the city. The Castillo San Cristóbal is the largest Spanish structure in the New World. The forts survived attacks by the English, Dutch, and American’s before the island was transferred to the United States. The forts were still in active military use during World War II and a few modern fortifications can be seen on the forts.

Visitors to San Juan can explore the buildings of Castillo San Cristóbal and Castillo San Felipe del Morro. The Fortín San Juan de la Cruz is closed to the public but you are allowed to walk the grounds.

The Stonewall National Monument is one of the newest National Monuments and the first dedicated LGBT rights and history. In the 1960s, being LGBTQ was illegal and harshly punished in New York City. The Stonewall Inn was located in Greenwich Village. In the late 1960s, it was selling liquor without a license and was a popular hangout for members of the underground LGBT community. On June 28, 1969, the NYPD raided the bar and started to arresting the bar patrons. The onlookers decided they were done being persecuted for being themselves and the police. They decided to fight back. This spontaneous resistance kicked off the movement for equality.

Stonewall National Monument was created on June 24, 2016, and the park doesn’t yet have a visitor center but a self-guided tour of the area and the Stonewall Inn still operates as a gay bar.

Best Time to Visit: June (June is Pride Month and the NYC Pride March is typically held on June 28)

Must-See: Enjoy a ranger-led talk about the Stonewall Uprising and the LGBTQ civil rights movement.

Theodore Roosevelt National Park holds a special place in my heart. It is more than just named for renown conservations and US President Theodore Roosevelt. Roosevelt came to the area as a young man to heal after the death of his wife and mother. It was his experiences here as a hunter and ranchers that inspired his conservation policies as president.

Theodore Roosevelt National Park is a fragmented National Park. The park is made of three different units in Western North Dakota. The two main units – North and South. Visitors to these units have access to scenic drives, over 100 miles of hiking trails and the opportunity to view prairie dogs, bison, feral horses, and many other animals.

The third unit is called Elkhorn Ranch. It is an hour and a half drive along gravel roads from both the north or the south unit. This unit is the site of Roosevelt’s original ranch. It was here that the Maltese Cross Cabin was built and where Teddy lived and worked cattle. The Cabin has been moved to the south unit but visitors are still welcome to explore Elkhorn. There is a 0.75-mile trail to walk with scenic views along the Little Missouri River.

Best Time to Visit: May to September

Get help planning your visit to Theodore Roosevelt National Park:

Visitors to the open-air memorial have a chance to pay their respects to the over 400,000 men and women who lost their lives during the conflict and reflect by the pool.

** The states of Alaska and Hawaii were both territories at the time of World War II.

Must-See: Find the Kilroy engraving on the memorial. Kilroy was a common piece of graffiti left my American soldiers

What National Parks do you plan to visit in 2020?