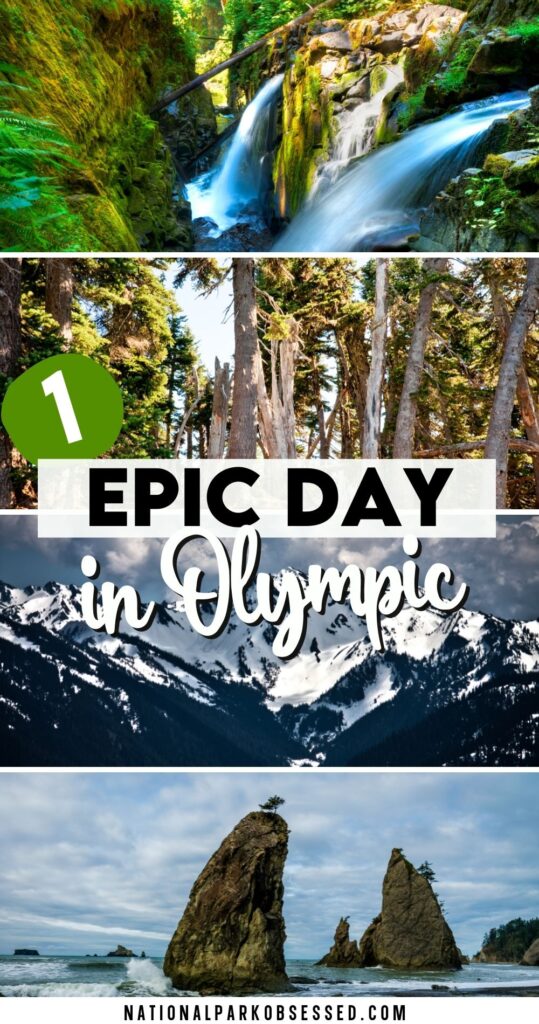 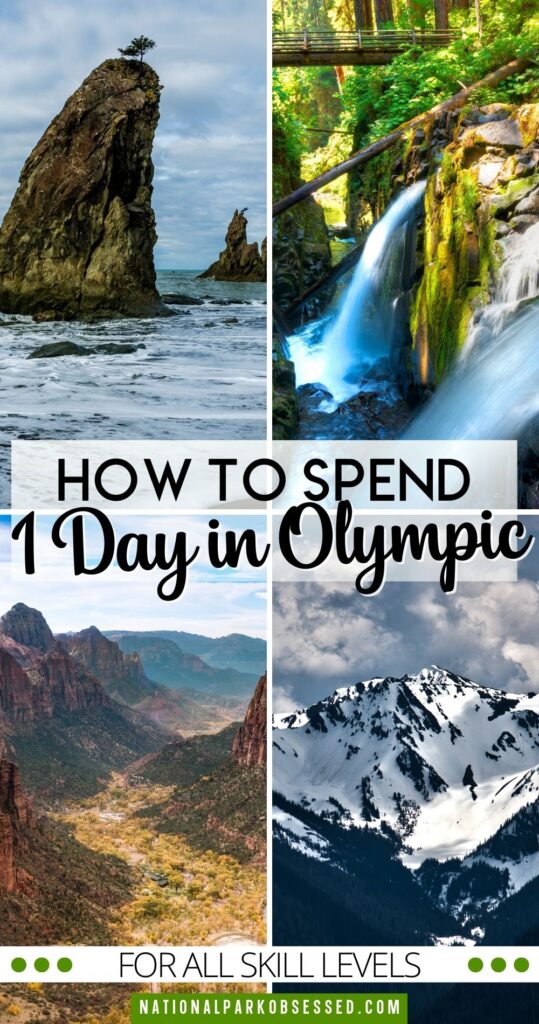 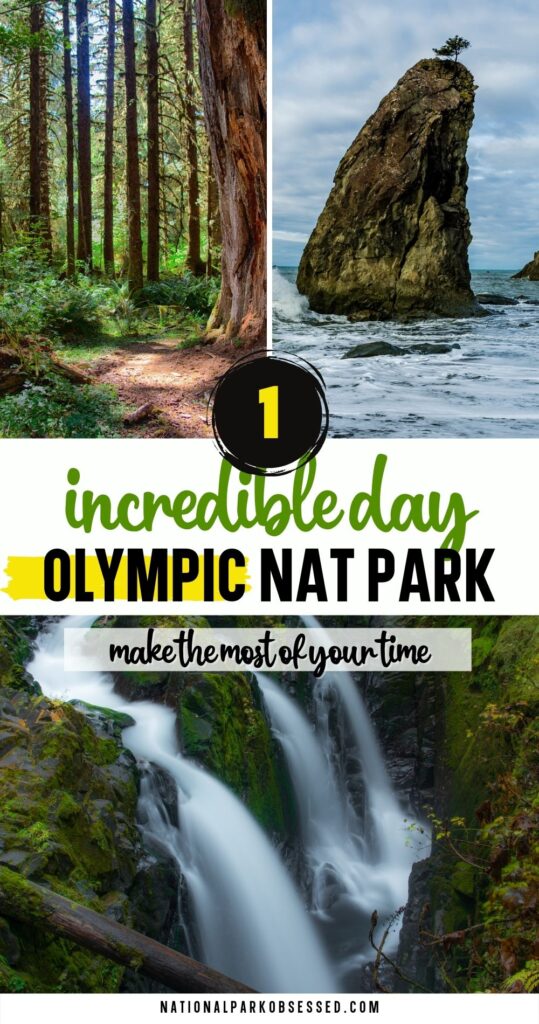 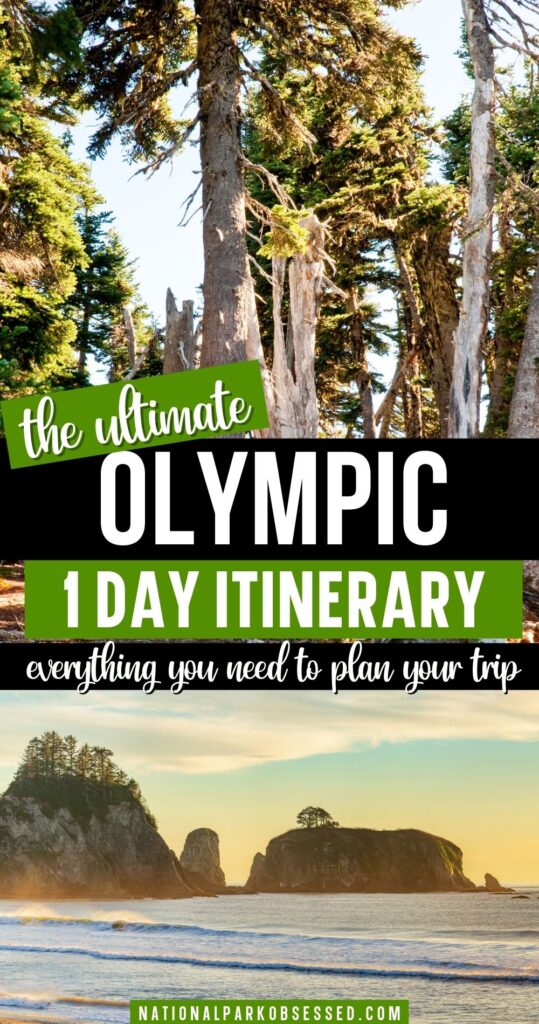 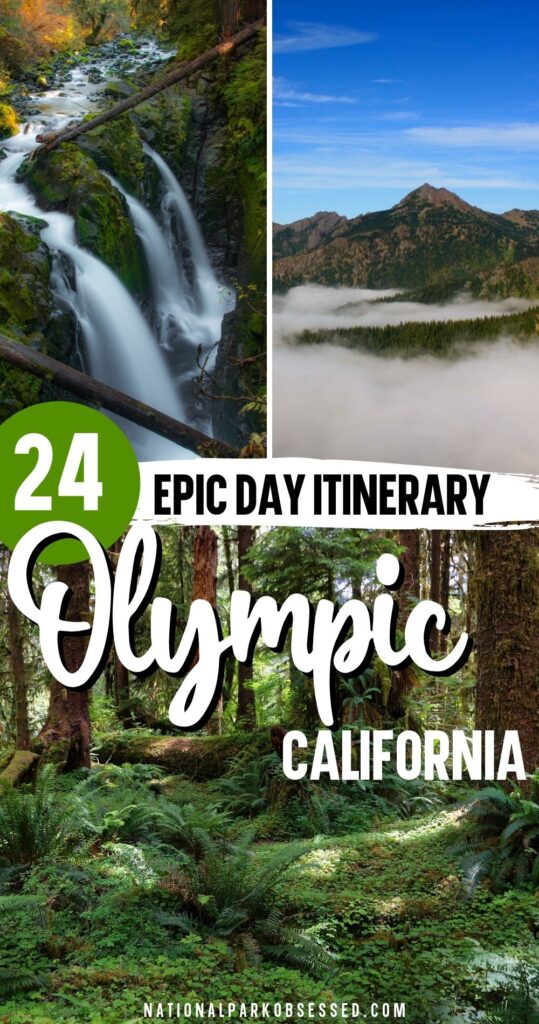 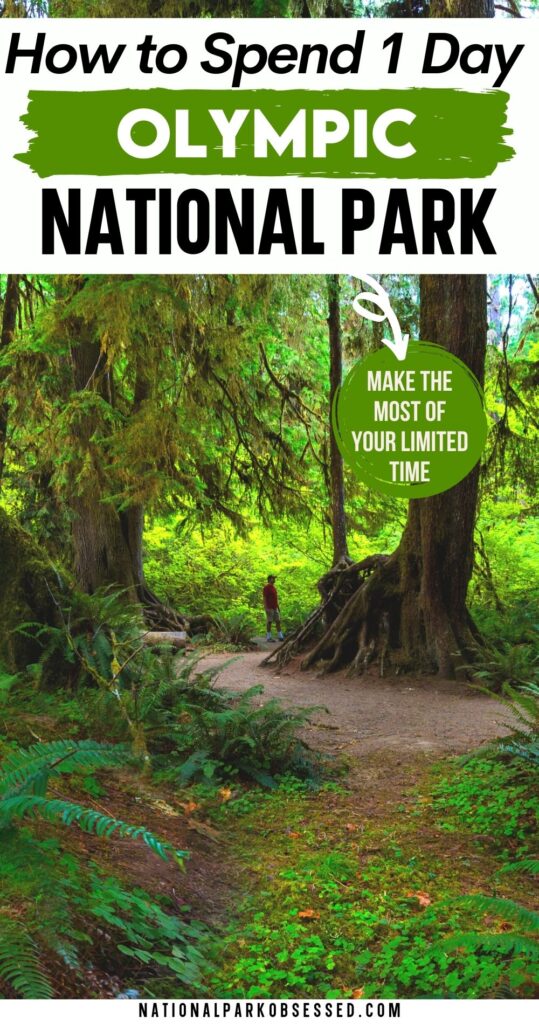 Located in the northwestern corner of the United States lies a diverse landscape comprised of three distinct biomes, called Olympic National Park. Olympic National Park is one of the largest parks sitting at just over 1,400 square miles. The park begins in the glacier-capped mountains and spans through the temperate rain forests before eventually touching the pacific coastline. With so many areas and destinations, it can be hard to discover the best places to see. It becomes more difficult when you are on a tight schedule.

Getting to Olympic National Park

Olympic National Park is the crown jewel of the Olympic Penisula. The park is made up of two parts. Most of the park is located at the center of the Peninsula along with a section of Pacific coastline along the western edge of the Peninsula. Highway 101 makes a loop around the peninsula and provides access to all the regions of the park. If you are flying to Olympic National Park, the closest major airport is Seattle-Tacoma International Airport (SEA) which is about 2.5 hours from the park.

Public transportation around the park is limited. You can take the Olympic Bus’s Dungeness Bus Line to Port Angeles and Clallam Transit System provides limited access to some Olympic National Park destinations. There doesn’t seem to be a full system map of the Clallam Transit System online so I couldn’t get a good feel about what in the park is accessible via public transport.

Estimated Drive to Olympic from nearby National Parks:

The best time to plan your visit to Olympic National Park is the Spring and Fall months. May to September offers visitors the best experience. Spring flowers and wildlife are starting to venture out after the snowmelt in the mountains while the rainy season is coming to an end along the coastline and forests. Typically the roads and facilities are fully operational during these months.

Visitors arriving from October to April should check the weather reports and road conditions. The mountain roads are sometimes closed due to icy or snowy weather.

Is One Day in Olympic Enough?

No. Yes. Sort of. There is no right or wrong answer to this question. National Park Obsessed’s founder wrote an entire article dedicated to this is XX enough time to visit a National Park. The important thing is that you make the most of the time you have and do what interests you the most. There is no hard and fast rule that says you only have to visit Olympic once.

Where to stay in Olympic National Park?

There are a lot of options for lodging in Olympic National Park. If you only have one day to spend in Olympic National Park, it is better to stay in either Forks or Port Angeles. These two cities are about an hour and ten minutes apart. While either option works, we recommend staying in the one that is closer to your starting point. We will go how to pick which city to stay in a little later as we get into the actual itinerary.

There are several camping options outside of the park such as in the Olympic National Forest.

What to do When You Have One Day in Olympic National Park?

One of the coolest things to do in Olympic National Park is to explore the tide pools. You can only explore the tide pools during low tide. There are two low tides every day. They are roughly 12~13 hours apart. Start your day trip to Olympic planning with the NOAA tide predictions. If you are serious about exploring the tide pools, you need to be one of the beaches during low tide. For this Olympic Itinerary, we recommend Rialto Beach. We have outlined this itinerary assuming a mid to late afternoon low tide. Depending on said low tide, you may have to run this itinerary backward or swap Hoh Rain Forest and Rialto Beach.

If you are staying outside the park, we suggest staying closer to your starting point. So if you have an afternoon low tide, stay in Port Angeles or at one of the northern campgrounds. If you have a morning tide, stay in Forks or one of the nearby campgrounds. If you are staying at one of the in-park lodges such as Sol Duc, it might be worthwhile to start there then go one direction or the other depending on that low tide.

How to Make the Most of One Day in Olympic National Park?

Start your day with a visit to the Greek gods, sort of. They are likely still in Greece but you can get out and explore North America’s Olympic Mountain Range. Make the 45-minute drive from Port Angeles up to Hurrican Ridge. The drive-up is a little curvy but the view is worth the drive. Once you get to the top of the ridge, you will be treated to an amazing view of the Olympic Range. There are a range of hiking trails in the area.

After your hike, head back to Port Angeles, if the visitor center is open stop by and grab your National Park Passport Stamp. Start driving towards the Sol Duc River area. Along the drive, you will pass Lake Crescent. There are several viewpoints on the lake ends to stop and enjoy the views.

Once you get to Sol Duc River, there are many smaller stops along the river such as Salmon Cascades. At the end of the road, there is the trailhead for Sol Duc Falls. This spectacular waterfall is a 1.6-mile out-and-back hike.

Once you are done with your hike, head back to your vehicle and head over to Rialto Beach. It’s time to go explore the tide pools. Ideally, you’d like to arrive at the beach at least an hour before low tide. You will have to walk along to an area named Hole in the Wall for the BEST tidepools in the park. It is about a 1.5 mile from the parking lot to the Hole in the Wall.

IMPORTANT SAFETY NOTES: Watch closely for the returning tide and “sneaker waves.” The rocks may be extremely slippery. Use caution and test rocks before stepping on them. Do NOT walk through Hole in the Wall if water tide is covering the flood. Watch and listen for falling rocks. Avoid spending long amounts of time near or under the arch. Take your picture and get OUT.

Up next, head up to the Hoh Rain Forest. This temperate rainforest is one of Olympic’s best-known features. There are two short hiking loops in the area. The first is Hall of Mosses, a 0.8-mile loop, and the second is the Spruce Nature Trail, a 1.3-mile loop. Both of these trails explore the enormous conifers and maples covered in moss. Between these two trails, visitors can expect to learn about the unique flora and fauna that call this rainforest home. Keep an eye out here for Roosevelt Elk.

Sol Duc Falls Trail follows along the Sol Duc River before reaching the falls. The moderately difficult dirt path end at the falls before turning around and heading back to the trailhead. The waterfall is in the heart of the Olympic Rain forest and splits into 4 smaller falls before falling into the canyon below.

The Spruce Nature Trail is a 1.3-mile loop trail in the Hoh Rain Forest that is paved with minimal elevation gain. The loop is wheelchair accessible and offers all visitors a look into the majestic beauty of the rain forest. Visitors can explore the enormous conifers and maples covered in moss.

The Hall of Mosses Nature Trail is a 0.8-mile loop trail in the Hoh Rain Forest that is paved to begin and turns into a dirt footpath for most of the trip. The loop covers about 60 feet of elevation gain and offers all visitors a look into the majestic beauty of the rain forest. Visitors can explore the enormous conifers and maples covered in moss.

The Hole-in-the-Wall is a landmark at the far end of Rialto Beach. Visitors can expect to hike the beach at low tide, observing countless tide pools along the way to the large rock structure. The Hole-in-the-Wall is at the end of a 4.6-mile out-and-back hike along the Rialto Beach. For the best experience, completing the hike during low tide (NOAA tide predictions) is recommended.

I hope this One Day in Olympic National Park Itinerary helps you plan your trip to Olympic. Olympic is an amazing National Park and is so worth a visit. If you need any help finding gear for your trip, check out these guides.

If you are looking for advice on other types of outdoor gear specific guides:

Pin for Later: How to Make the Most of One Day in Olympic National Park?